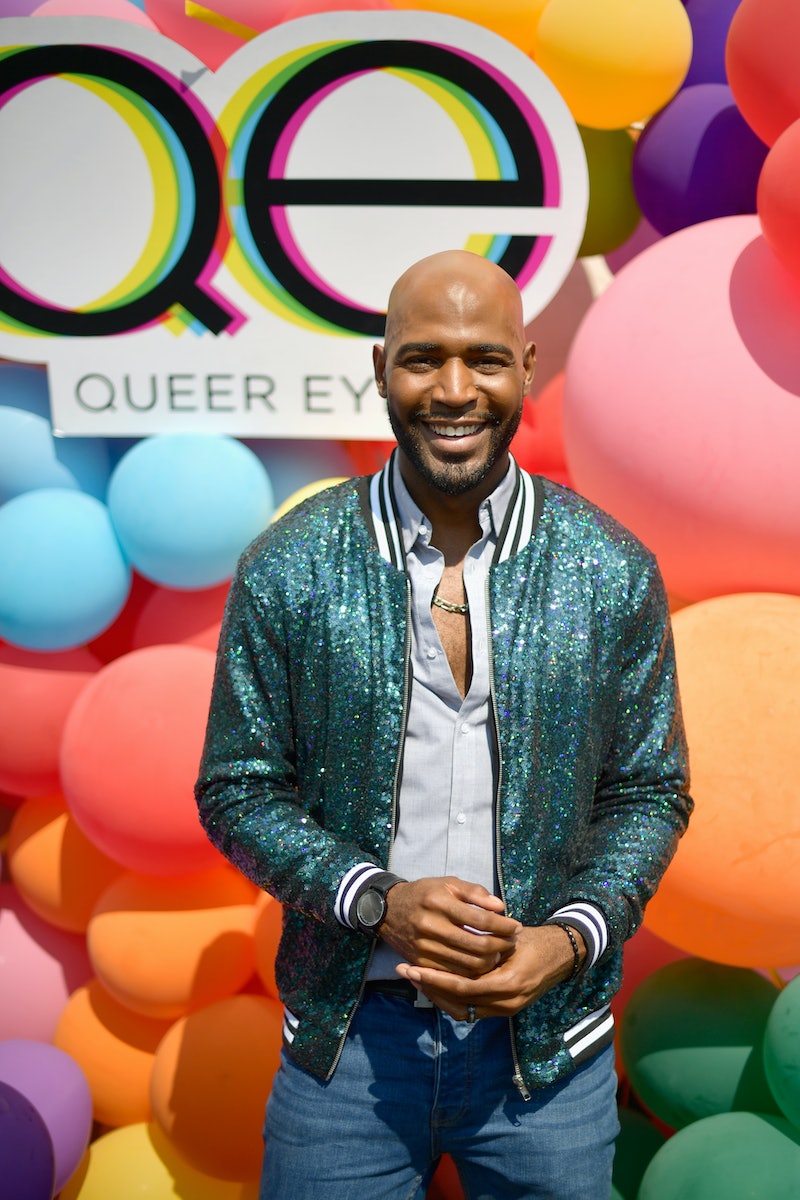 While holiday stress can take many forms — low finances, chaotic travel, dealing with your mother as she freaks out about everything — the last thing many people want is to get into heated political debates over holiday dinner. Unfortunately, you may be bracing yourself post-midterms to really get into it, but there are ways to keep the tension to a minimum. So how do you handle political debates during the holidays? Karamo Brown from Netflix's Queer Eye has some advice. "I don't think people realize how much anxiety they have during the holidays, so you have to take a moment just to literally breathe," Brown tells Bustle.

Bustle caught up with Brown through his recent partnership with Ford, and drove around with him in a 2019 Ford Edge while he revealed his tips for dealing with the most stressful holiday situations. As the Fab Five's expert in all things relating to personal growth and developing meaningful connections, Brown knows exactly how to squash these stressful conversations before they happen, or at least, handle them in a way that doesn't create more drama than necessary.

If someone is holding onto a prejudiced political opinion, you may feel like, "this is my one opportunity to let them know why their choice is wrong," Brown tells Bustle. "First of all, any time you tell somebody that they're wrong, they're automatically going to put a wall up, and you're no longer communicating with each other. So I always say to people, [...] if you're leading a conversation from a place of right or wrong, then it's probably not the best conversation to have."

If your goal is to truly change someone's mind, Brown says to "lead from a place of growth and learning," and be open to the prospect that change won't come immediately while you're passing around the mashed potatoes. And if things are really starting to get heated, it may be better to suggest a later date to finish the conversation.

"[...]During the holidays, any time someone tries to engage in political conversation, I always say, how about we have lunch at another time where we can both learn from each other," Brown says. "And then you don't get into these arguments, where people automatically start saying, 'you're wrong, I'm right.' And it all goes to hell and back quickly."

Still, Brown acknowledges that in the moment, when your face is flushing red, and the true nature of the holidays is quickly escaping you, it's difficult not to act on your impulse to "check" your relatives, especially if they say something politically incorrect. But how can you strike the balance of speaking up, without a full-scale battle royale?

"Every statement we make comes from an emotional trigger, or some place that [...] has taught us that this emotion is how we're supposed to be feeling," Brown says. "And sometimes that's misguided."

Though this feeling your relative has may inherently be problematic, Brown says that for many, it's been learned over the course of a lifetime. So quickly correcting someone who has spent many years thinking this is the way likely won't help take those walls down.

"[Instead] saying something like, 'where did that point of view come from,' 'why do you think you think that,' 'how do you think that's going to make somebody else feel,' [gives] them an opportunity to sort of critically think themselves, and get to a place where they realize 'oh, maybe this language is hurtful,'" Brown says. "If it took someone 15 years to get this in their mind, this belief that's negative, it's not going to come out of their mind in one conversation."

As frustrating as it may be, if this conversation does wind up happening at the dinner table, keep in mind that it's only the start. Make it a point to try not to escalate things further, and stick to being informative instead of combative.

Also remember that if a situation becomes particularly toxic in a way that makes you uncomfortable, you're allowed to leave the conversation. Brown says it's important to give yourself "permission" to do what's right for you, especially if that means removing yourself from the discussion.

"People need time to grow and to take the narratives out of their mind, and replace them with new ones," Brown says. So patience is key. We can help some people in our lives move away from these more negative narratives — even during the most stressful time of year.