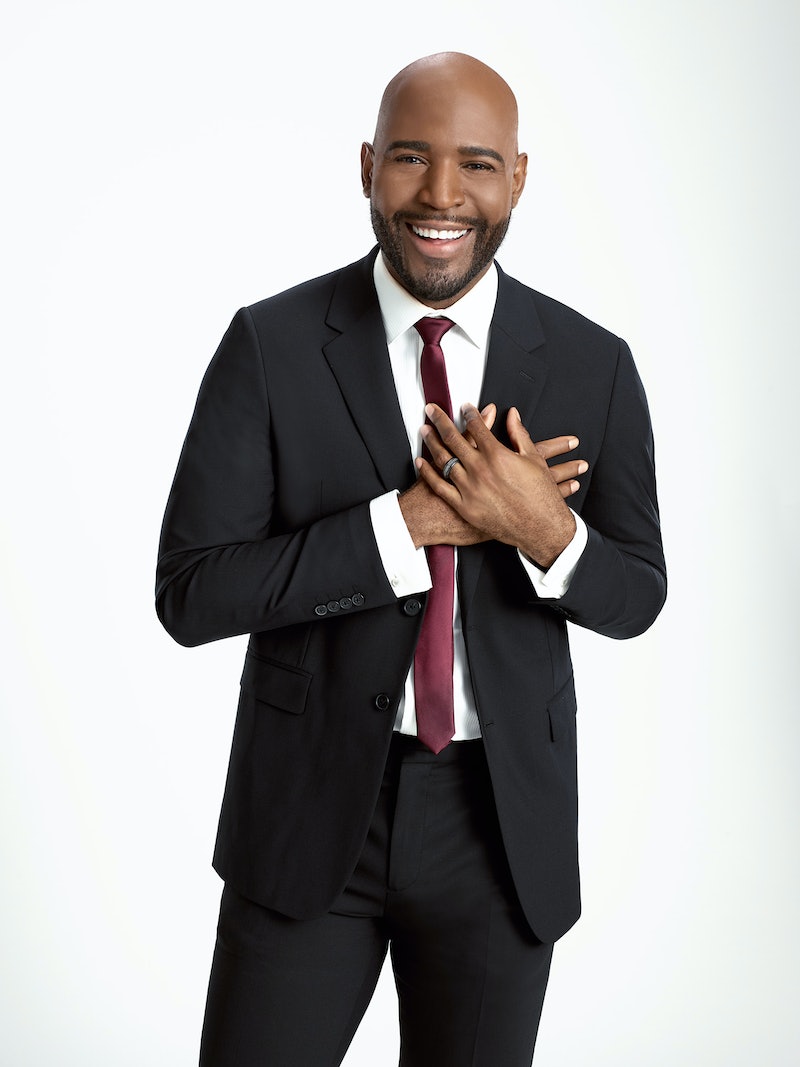 When the cast for the new season of Dancing with the Stars was announced, contestant Karamo Brown received some backlash for saying he was looking forward to having a meaningful conversation with Sean Spicer. Ahead of the DWTS season premiere, Karamo Brown gave a Sean Spicer update on their relationship, and although he's not on bad terms with the disgraced press secretary, he's not that close with him either, as some fans may have expected.

While appearing at the Creative Arts Emmys on Saturday, Sept. 14, the Queer Eye star told US Weekly that he has only talked with Spicer once so far. “I don’t know anything about him to be honest with you," he said. “We only met one day, and one day turned into something bigger.”

But the Queer Eye star still emphasized the importance of having conversations with people who may have different beliefs and perspectives than yourself. “For me, the biggest thing is, I always go forward and try to have respectful conversations with people who are different than me,” he said. Spicer repeatedly lied to the public while working as Donald Trump's press secretary, which is why fans criticized Brown for seemingly dismissing this as a "difference." However, the reality show star is staying true to his beliefs. “People will attack you. People will say they love you for it, and for me I just have to push forward, believing in myself and believing in the beauty of humanity.”

In a separate interview with US Weekly, Spicer also dished on his conversation with Brown, and praised him for trying to foster more positive conversations between people. That said, the former Press Secretary made it clear that they haven't talked about politics — at least not yet.

“He and I had a really fun talk — not about politics, just about getting to know each other and how excited we are about that opportunity,” the politician said. “That’s kind of been his trademark. He has tried to foster a more positive dialogue and he did it again and it was really great, but I felt bad because he was trying to be a good person." Spicer continued, saying he was disappointed by the backlash. "He was obviously doing the right and good thing and he has the best intentions. We need more people like him as opposed to fewer. It was a shame that people were so nasty to him.”

Although many might still be apprehensive about seeing Spicer on the ballroom floor, including DWTS host Tom Bergeron, the cast and crew have been nothing but nice to him, according to the politician himself. And he even has some support from DWTS alumni. While attending the Creative Arts Emmys, former pro dancer Derek Hough revealed what he thought of Spicer's casting, saying that it was "predictable" and will definitely draw attention, but noting he's not particularly upset by it.

“No, I don’t think it’s disappointing,” he told People. “Because it’s television. I think that’s the thing. It depends on what you look at it. Right? And, you know, at least for me, I liked being a part of something that was, at least in my personal, what do you want to call it? My own little world, I want everything to be positive and I loved aspects of the show that create opportunities for redemption in certain cases."

Regardless of what you think about Spicer's casting, the ballroom will certainly be getting very spicy when the new season of DWTS premieres on Monday, Sept. 16.