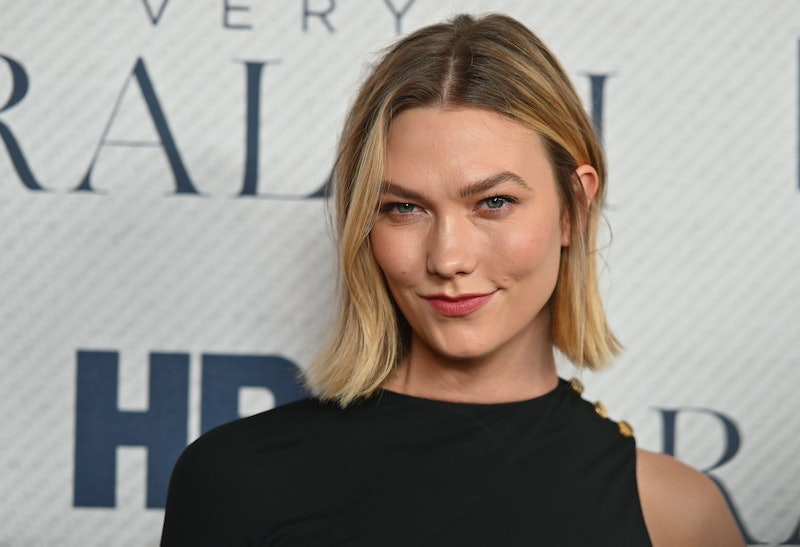 A few weeks after Victoria's Secret announced that they would not be putting on their annual fashion show, a former Angel is weighing in. While talking about the show during a recent appearance on TODAY, Karlie Kloss said she wasn't surprised the Victoria's Secret Fashion Show was cancelled, and revealed that she feels the lingerie giant hasn't done a great job of keeping up with modern demands. The show was officially canceled on November 21, after months of speculation. And in a statement, Stuart B. Burgdoerfer, executive vice president of Victoria's Secret parent company, L Brands, confirmed to WWD that the company was looking to "evolve" their marketing strategies.

While some of the brand's ambassadors and models — known as Victoria's Secret Angels — expressed disappointment over the news, Kloss is only surprised that it wasn't canceled sooner. "I think it's a reflection of the world we live in today," the model and Kode With Klossy founder explained. "And, you know, consumers demand that brands are inclusive and body positive and sustainable. And I think brands have to evolve."

Kloss was first cast as a Victoria's Secret Angel in 2013, and quickly became one of the more popular faces of the brand, appearing in advertisements worldwide and walking in the fashion show multiple times. She decided to hang up her wings in 2015 to go back to college, but returned to the catwalk in 2017 to walk in the Victoria's Secret Fashion Show in Shanghai, China. Though she told W Magazine at the time that it was "such a special runway to be a part of," in a July 2019 interview with UK Vogue, Kloss explained that her feelings on Victoria's Secret and the brand's message had changed.

"The reason I decided to stop working with Victoria’s Secret was I didn’t feel it was an image that was truly reflective of who I am and the kind of message I want to send to young women around the world about what it means to be beautiful," Kloss told the British outlet. "I think that was a pivotal moment in me stepping into my power as a feminist, being able to make my own choices and my own narrative, whether through the companies I choose to work with, or through the image I put out to the world."

Kloss' decision to distance herself from Victoria's Secret came in the wake of chief marketing officer Ed Razek's controversial comments about the brand. In a November 2018 interview with Vogue, he declared that Victoria's Secret wouldn't cast plus size or transgender models "because the show is a fantasy." He later apologized for those comments, but they inspired people in both the fashion and entertainment industries to also publicly take a stand against Victoria's Secret. Even the 2018 Victoria's Secret Fashion Show performer, Halsey, expressed her disappointment, noting that the comments emerged after she had filmed the show in a since-deleted Instagram post. "As a member of the LGBTQ+ community, I have no tolerance for a lack of inclusivity. Especially not one motivated by stereotype," she wrote in part.

While Victoria's Secret has made attempts to be more inclusive recently, it's clear from Kloss' comments — and the general reaction to the fashion show's cancellation — that people are no longer interested in supporting a brand that doesn't reflect the real world, and what it looks like.

More like this
This 'One Tree Hill' Wardrobe Error Is Going Viral On TikTok
By Brad Witter
Kate Middleton Wore The Ultimate '90s Power Suit
By Sam Ramsden
30 Of Kendall Jenner’s Best Runway Looks To Date
By Dominique Norman
Looking Back At Kylie Jenner's Best Fashion Week Looks
By Allie Fasanella
Get Even More From Bustle — Sign Up For The Newsletter
From hair trends to relationship advice, our daily newsletter has everything you need to sound like a person who’s on TikTok, even if you aren’t.