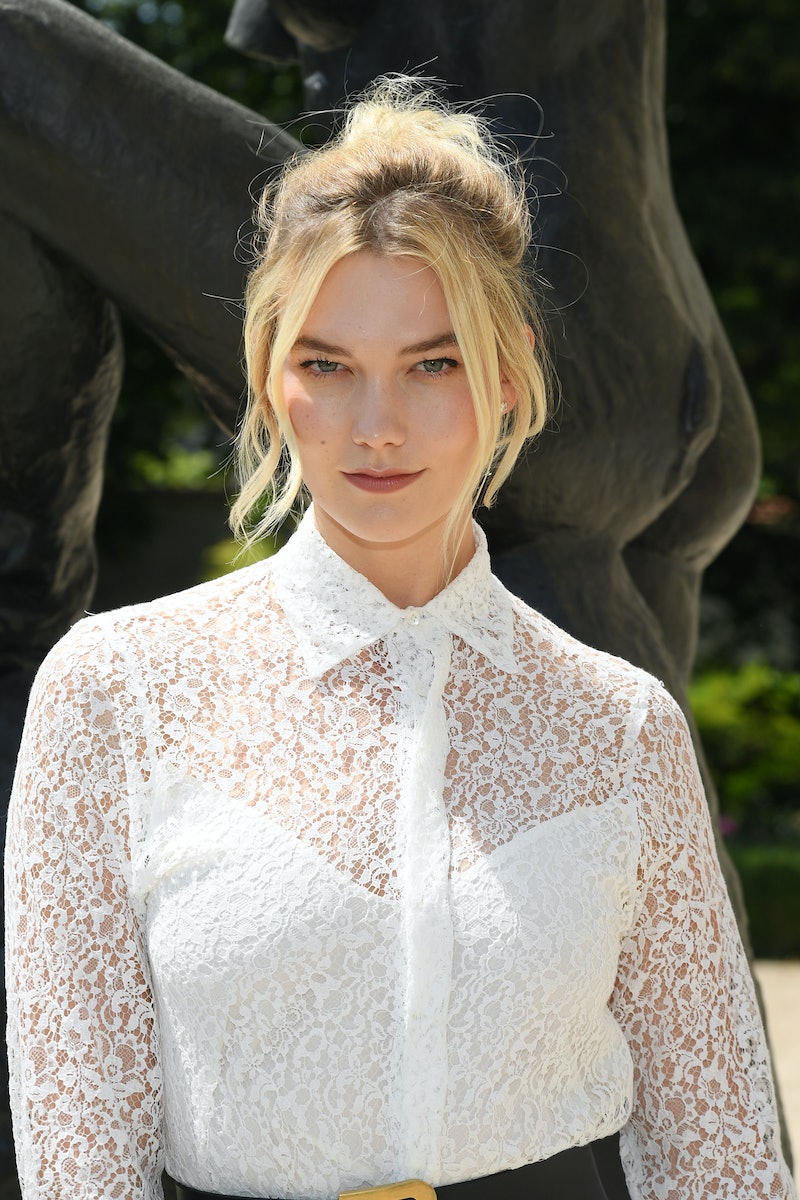 If there's not time to take a full vacation, a mini honeymoon might just be the solution. Karlie Kloss and Joshua Kushner jetted off to a 48-hour honeymoon, and the pictures will make you believe in love again. According to E! News, Kloss tied the knot with Kushner, who is an investment banker, in a traditional Jewish ceremony in upstate New York on Thursday. In the days after the wedding, the model shared several moments from their pre-honeymoon departure on her Instagram Story, including snacking on leftover wedding cake and preparing to get on the jet.

Over the years, Kloss and Kushner have kept much about their relationship private, aside from a few major highlights. Kloss and Kushner first began dating six years ago, and the businessman reportedly proposed in June. In July, Kloss confirmed the engagement on social media. And recently, they both shared shots from the wedding ceremony on social media. Kloss put a simple caption on the wedding picture, writing the date of their wedding "10.18.2018."

Meanwhile, Kushner shared a photo of himself using an old-fashioned camera to snap a picture of Kloss in front of the forest background. He captioned the photo, "i married my best friend." The celebration didn't end there, and a few days later Kloss shared the beginning of their honeymoon.

The first picture Kloss shared was of herself sitting in front of the fridge in her wedding dress, eating leftover cake from the reception. The caption read, "Finally got to eat my Milk Bar wedding cake at 2AM."

The star also shared a picture of the cake in question, and she can be seen having eaten the top layer. The cake appears to be in Milk Bar's birthday cake flavor, and had flowers on the side leftover from the special day

Kloss also shared a picture of her now-husband to her IG Story, where he can be seen standing under an arbor with flowers. She captioned the photo, "My Hubby" with a blue heart.

It's clear the couple is enjoying the first few days of being married, and the model and entrepreneur also shared the first few moments of their honeymoon.

In the quick video, Kloss is standing on the airport tarmac and can be heard saying, "Alright, off to our mini-moon. Where's my husband?"

The two then board the plane, and though the star shared a spectacular ocean view from the sky, it's not yet clear where they are taking the vacation.

While the couple's engagement lasted only a few months, these two have been dating a long time. According to Vogue, Kloss met Kushner at a friend's dinner party when she was 19, and their relationship grew from there. "The proposal was romantic and sweet," Kloss told the magazine. "We spent the weekend in upstate New York, just the two of us." When posting about the engagement on Instagram, Kloss wrote,

"I love you more than I have words to express. Josh, you’re my best friend and my soulmate. I can’t wait for forever together. Yes a million times over."

The couple hasn't revealed if the mini-moon is just a placeholder before a real honeymoon, but given their busy schedules, it makes sense they had difficulty fitting in a longer getaway. Kloss recently announced she would be the new host of Project Runway, and launched Kode with Klossy last year, a summer camp to introduce young women to code apps. It's likely that the business world also has demands for Kushner, so this power couple might just have to wait to take some time off together.

Even so, eating cake in the middle of the night and heading to the beach seems like the perfect way to begin a marriage.