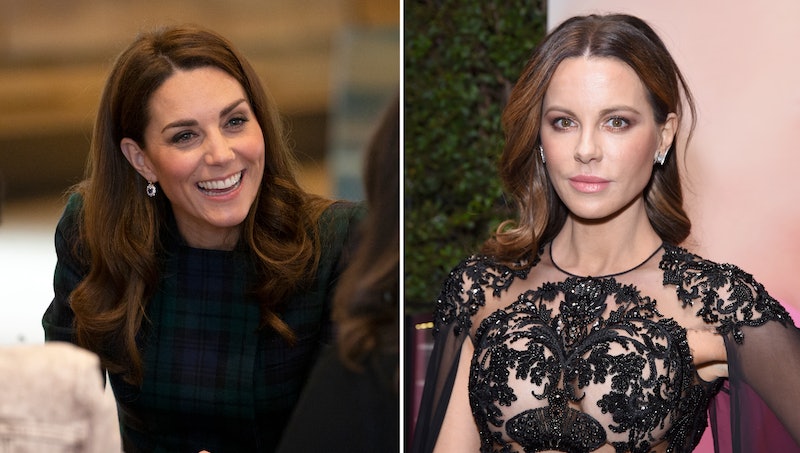 Beckinsale posted a photo of herself on Instagram in the emergency room and hooked up to a breathing tube on January 27 with the caption: "Turns out a ruptured ovarian cyst really hurts and morphine makes me cry. So thankful to everyone who looked after me #wobbly"

From the photos, it looked like Kate was in a great deal of pain, and ruptured ovarian cysts can be pretty serious, according to the NHS, causing extreme pain and blocking blood supply to the ovaries. Beckinsale's Instagram was quickly flooded by well wishers offering her messages of support and wishing her a swift recovering.

US media outlet USA Today then published a story about Kate Beckinsale's ruptured ovarian cyst, but accidentally used a photo of Kate Middleton. I must add that this photo of Kate Middleton is particularly royal, even featuring a coy royal wave! Other than the brunette locks and British accents, I've never really thought of the two Kates as doppelgängers.

Despite her current condition, it looks like Beckinsale has maintained her sense of humour, as she responded to the mix up in the best way possible. The actress screen shotted the cover story on Instagram, posting it with the caption:

"So moved and touched by all the kind wishes I have received over the last few days and staggered by the similar and worse stories my #cysters have been sending me. I am feeling much better and I hope all the other girls going through it are too. Back to resume my royal duties. William says hi".

I think it's fair to say that the Serendipity actress seems to be embracing her new royal role with open arms.

Now, of course, this hilarious post prompted a load of equally hilarious of comments. Actress Sarah Hyland commented, "tell Meghan I say hi!" and Rose McGowan added "you made us proud, duchess." This is truly the stuff of legends. USA Today were also quick to comment on the post, saying:

“First and foremost, we’re glad to hear you’re feeling much better. We apologise for the image associated with this story. It appears our system pulled the first image in the photo gallery at the bottom of the story, instead of the image of you we put in the story, It just so happens the lead photo in the gallery is of Duchess Kate. We regret the error and are working to make sure this does not happen again.”

All I'm thinking is, in the next royal biopic, Kate Beckinsale has to play Kate Middleton, right? There's no two ways about it. Surely after this royal mix up, it's a no brainer.