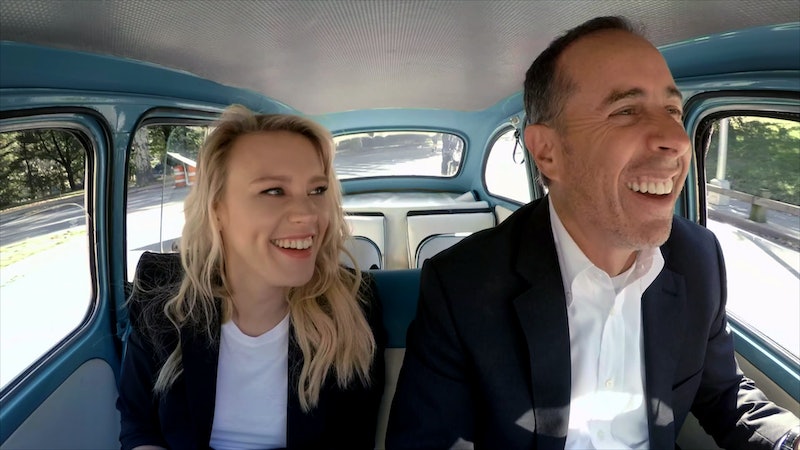 Did you ever think that you’d see Jerry Seinfeld and Kate McKinnon tooting around New York City in a turquoise-and-white 1962 Fiat 600 Multipla? And in virtually matching outfits, no less? Well, there’s a first time for everything, and in Kate McKinnon's episode of Comedians In Cars Getting Coffee, this very scenario plays out, of course, with hilarious results. But the best part of the 20-minute-long episode is McKinnon talking about the sheer pleasure of one particularly feminine beauty ritual — and the significance of it for a woman comedian.

The best comedians transcend the intellectual and move into the physical, and it’s because of this, McKinnon and Seinfeld agree, that getting dressed in the morning can be a hassle for a comedian. “It’s because it’s such a cerebral thing. You’d rather be a brain in a jar talking than have to attend to the physical body,” McKinnon says. “Plus, you can’t look too good. If you look too good, you stop being funny.” Maybe that’s why they both have the same outfit on in this episode — white shirt, dark blazer, dark pants. Not that they don’t look nice, but it’s a very simple look, a look that doesn’t scream, “Hey, check out what I’m wearing!” Apparently, it is easier to be funny when you don’t have to think about matching a shirt and pants.

Later, the two are talking about McKinnon — who is a lesbian — dressing and getting approached by men while out and about. She said that it’s never really been an issue for her. “It doesn’t happen a lot. My clothes say, ‘Do not talk to me,’” McKinnon laughs. “I wore a pair of SpongeBob SquarePants pajama bottoms, clogs, and a hand-me-down hooded sweatshirt. I gave myself my own haircuts. And that’s when I looked the best!”

Interestingly, though, McKinnon admits that women still always approached her, even when she was wearing those pajama pants and giving herself her own haircuts. The rules, Seinfeld decrees, are different there. Women seem to cut other women slack for not being red carpet ready all the time.

And speaking of the red carpet, McKinnon says that there’s one exhilaratingly wonderful moment that happens when she comes home from a big event. “To be fair, often, I’m in full makeup, a dress, and heels,” she says. ”Fake eyelashes. Oh my god, have you never known the pleasure of coming home and going — and yanking those off?” Seinfeld likens taking his contacts out as similar, but speaking from experience, it’s so not. McKinnon is so dead-on here — if you’ve ever felt that gorgeous, slow rip of taking off a strip of false eyelashes off, you know what she and I are talking about. It’s like peeling the protective film off an iPad or strip of skin (gross) off a sunburn. There’s something so delicious and satisfying about it.

Jokes aside, McKinnon makes interesting points here about what it’s like to be a woman not only in the world, but also in comedy. Female comedians have to be approachable and “pretty,” but it’s so much easier for her to work and be funny if she doesn’t have to think about what she looks like. It’s easier to be creative if your creative juices aren’t wasted matching belts to shoes.

It goes to show how much the male gaze affects women in everything they do. When McKinnon dressed in her SpongeBob pants, no man stopped to speak to her (not that she would have wanted him to, because who doesn't treasure being left alone?). But for other women, it's so different. Women know the pains of having to get ready and be “presentable” in the morning, and they just probably don’t care as much how together other people are, because they know the effort it takes.. Women still hit on McKinnon because they didn’t have this grand idea of what the ideal woman looked like — they just liked her, and they talked to her. Men, on the other hand, didn’t see big hair and “no makeup” makeup and didn’t know how to handle it. It’s a subtle point about the greater physical expectations that women face in their daily lives, but McKinnon makes it convincingly, nonetheless.