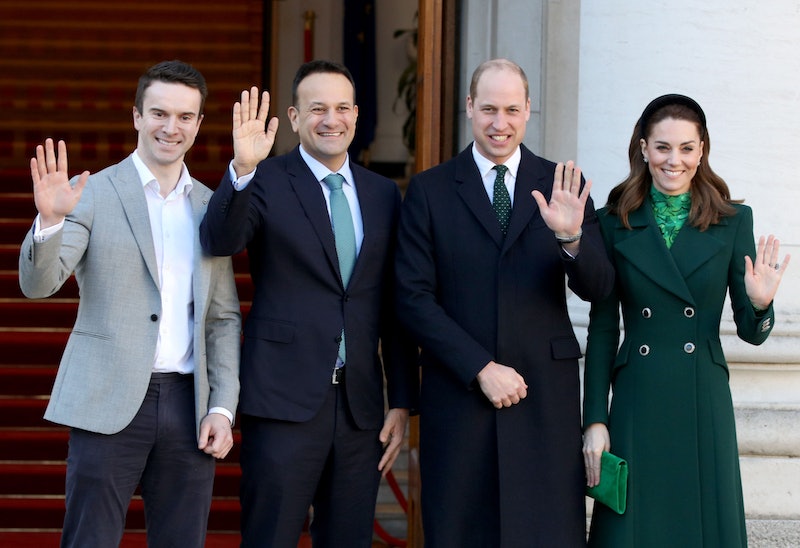 The Duke and Duchess of Cambridge, William and Kate, have kicked off their three-day trip to the Republic of Ireland. The couple aims to shine a positive light on UK and Irish relations, and Kate and William's itinerary during their first official visit to the country is set to keep the royal pair very busy indeed.

As the BBC reports, the Duke and Duchess will stop by in Dublin, Galway, and the counties of Meath and Kildare during their stay. Shortly after touching down at Dublin Airport on Tuesday (March 3), the royals began proceedings by meeting with Irish President Michael D Higgins at his residence, Áras an Uachtaráin, before travelling to the Garden of Remembrance in Dublin — which honours those who fought and died for Irish independence. At the memorial site, the couple laid a wreath to commemorate those who lost their lives, and although the event was not open to the public, a small crowd of royal spectators did gather outside the venue.

Rounding-off the first day of their visit — which aims to highlight the "many strong links between the UK and Ireland" — Kate and William stopped by the Irish government buildings to meet with Taoiseach Leo Varadkar, and as Elle reports, later attended a glitzy evening reception at the Guinness Storehouse, where the Duchess stepped out in a stunning emerald piece by The Vampire's Wife.

Throughout the remainder of the couple's three-day trip, the royals are also scheduled to meet with young people and locals who work within the creative arts, business, and charity sectors. The Duke and Duchess will then learn more about Ireland's conservation initiatives and the country's environmental protection efforts.

Speaking of the official visit, the palace explained that Kate and William will be given an opportunity to experience "modern and traditional Irish culture for themselves," and said the pair are set to "take in Ireland's rich culture, its impactful community initiatives and spectacular scenery."