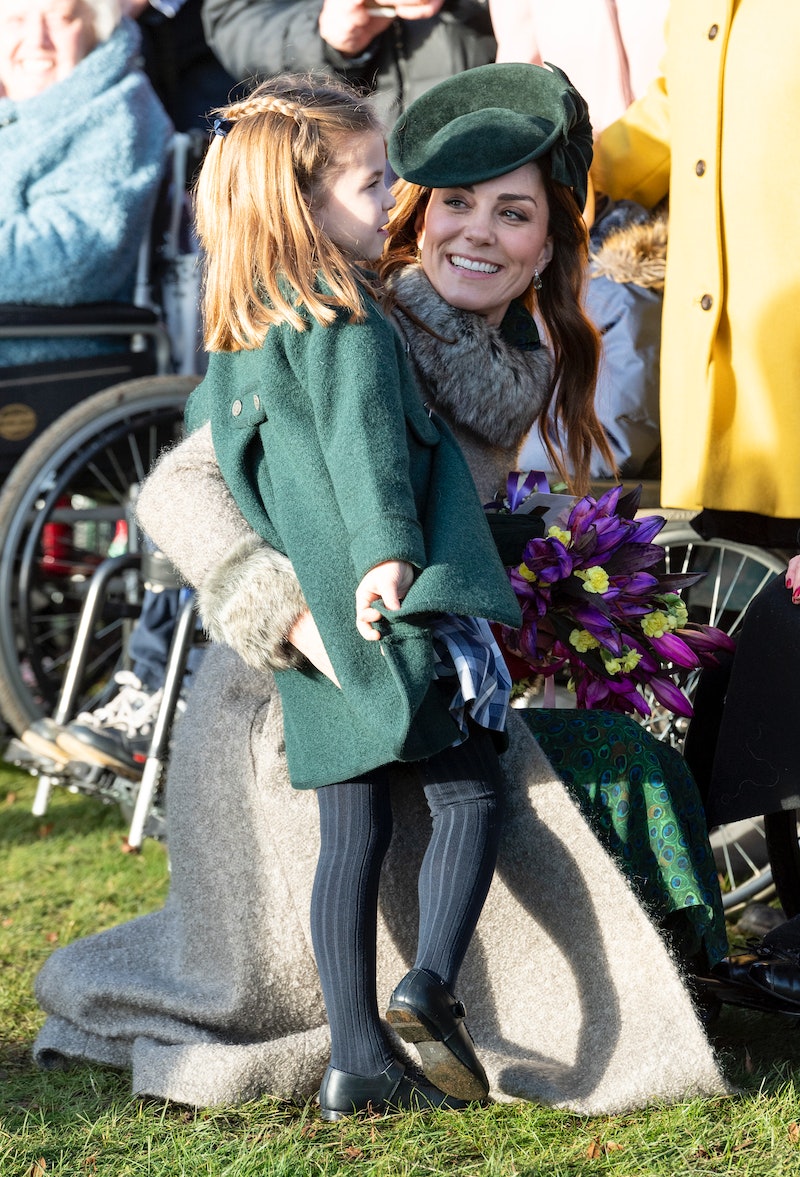 If you've been busy binging on You Season 2, you may have missed adorable photos of Princess Charlotte and her brother Prince George who joined Kate Middleton and Prince William during the royal walk to Christmas church services. The event marked the first time the two made the trek in public, but Middleton and Princess Charlotte may have stolen the show thanks to their coordinated ensembles.

According to Glamour, Middleton chose to stick with one of her favorite designers for the 2019 Christmas service. Her gray, faux fur collar coat was designed by Catherine Walker, the same designer who created her red coat from last year's holiday services. The Duchess of Cambridge chose to accessorize with all emerald accents, the perfect accent to her gray coat. She paired the outerwear with Emmy London Josie pumps in green and an emerald clutch from the same brand. As for her fascinator, the piece is actually a re-wear from Sylvia Fletcher for Lock & Co that she wore to Christmas in 2015 and St. Patrick's Day in 2017.

Middleton's accessories are what helped she and her daughter, Princess Charlotte, be royal twins for the day. Charlotte donned an emerald Amaia Kids coat, black striped tights, and black Mary Jane flats. Her hair was tied back in what appears to be a velvet ribbon (à la her mother). Thanks to the hue of her coat, the pair were the epitome of cute and chic mother-daughter holiday dressing.

The color of Charlotte's coat and Middleton's accessories weren't the only way the pair matched either. Elizabeth Holmes of "So Many Thoughts" (an Instagram Stories series offering sartorial commentary on the royal family) also pointed out that like her mother's own outerwear, Charlotte's coat features round buttons in a double breasted style.

Holmes had one more observation, though, that might make fans of Middleton's style very happy. The Duchess of Cambridge seems to have potentially begun a headband trend among other royals. In the past year, Middleton has become the queen (or Duchess, if you will) of headbands. From the one she wore during Christmas 2018 to the $30 Zara piece she wore to the Festival of Remembrance, Middleton has been known to channel her inner-Blair Waldorf vibes. Holmes pointed out in her So Many Thoughts Instagram story that several other members of the royal family took note and wore them for Christmas this year. Because who doesn't want to cop Middleton's style, even if they are related?

While Princess Charlotte may not have been given a headband to imitate her mother, she and Kate Middleton's coordinated emerald ensembles have certainly set the standard for family holiday twinning.