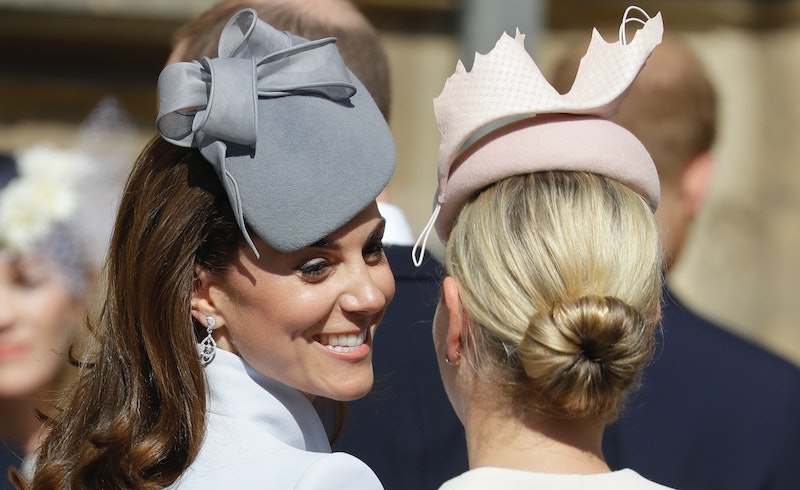 Kate Middleton might be a royal, but that doesn't mean she's above repeating outfits. A case in point is the Duchess's Easter outfit, where Kate Middleton re-wore her wedding earrings to Easter services. Actually, Middleton's entire outfit was a repeated affair.

The Duchess attended Easter mass in St. George's Chapel with Queen Elizabeth II and the entire royal family. Middleton dressed the part for the holiday by leaning into the pastel trend that Easter is known for. Specifically, Middleton wore an Alexander McQueen light blue coat-dress with a matching blue fascinator by Jane Taylor. For those who keep a close eye on Middleton's style, they will know that the Duchess wore this same outfit once before. Middleton donned the exact coat-dress and hat to an Easter service in 2014, back when she and Prince William were in Australia.

Middleton wore the pastel blue number at St. Andrew's Cathedral in Sydney, during her three-week tour in Australia and New Zealand. That tour also happened to be the first over-seas trip the young royal family made with their then-infant son, Prince George.

While the dress was last worn when Middleton was a brand new mother, in 2019 she decided to pair the nostalgic dress with another sentimental item. The coat-dress was accented with the very earrings that Middleton wore on her wedding day in 2011.

Middleton donned her Robinson Pelham wedding earrings to the Easter service, bringing them out of her jewelry box. According to People, the earrings were made especially for her. The pear shaped design pays homage to Middleton's coat of arms.

The earrings were a gift from Middleton's mother and father for her wedding day. The earrings are rimmed with diamond-set oak leaves that surround a diamond acorn suspended in the center of the pear shape design. According to Town & Country, the oak leaves and acorns are both symbols used in the Middleton's coat of arms.

It might not be just pure coincidence that Middleton decided to wear the jewelry that she wore on her wedding day on Easter. Not only was April 21 Queen Elizabeth's 93 birthday, but this month also marks Middleton's wedding anniversary. Middleton and Prince William are celebrating their eight anniversary on April 29, so maybe the Duchess was feeling sentimental.

Middleton is a champ when it comes to bringing back recycled looks flawlessly. For example, when the Duchess attended the 2018 Tusk Conservation Awards in Nov., she wore a teal, cap-sleeve gown. While Middleton looked stunning in the lace-accented number, it wasn't her first appearance in the dress.

Middleton also wore the gown in May 2012 to a gala at London's Royal Albert Hall, making it a seven-year-old piece in her wardrobe. To give you context, the Duchess wore that particular dress just a year after she married Prince Charles and became royalty.

Middleton is an expert when it comes to re-wearing her designer pieces, including her wedding accessories. While it's fun to replenish your closet with new staples, the Duchess definitely shows that a well curated closet never goes out of style.

More like this
This 'One Tree Hill' Wardrobe Error Is Going Viral On TikTok
By Brad Witter
Hailey Bieber Looks Just Like Princess Diana & I Need To Copy Her ASAP
By Sophie McEvoy
Rita Ora Joined The Cut-Out Trend With These Bejewelled Butterfly Trousers
By El Hunt
30 Of Kendall Jenner’s Best Runway Looks To Date
By Dominique Norman
Get Even More From Bustle — Sign Up For The Newsletter
From hair trends to relationship advice, our daily newsletter has everything you need to sound like a person who’s on TikTok, even if you aren’t.