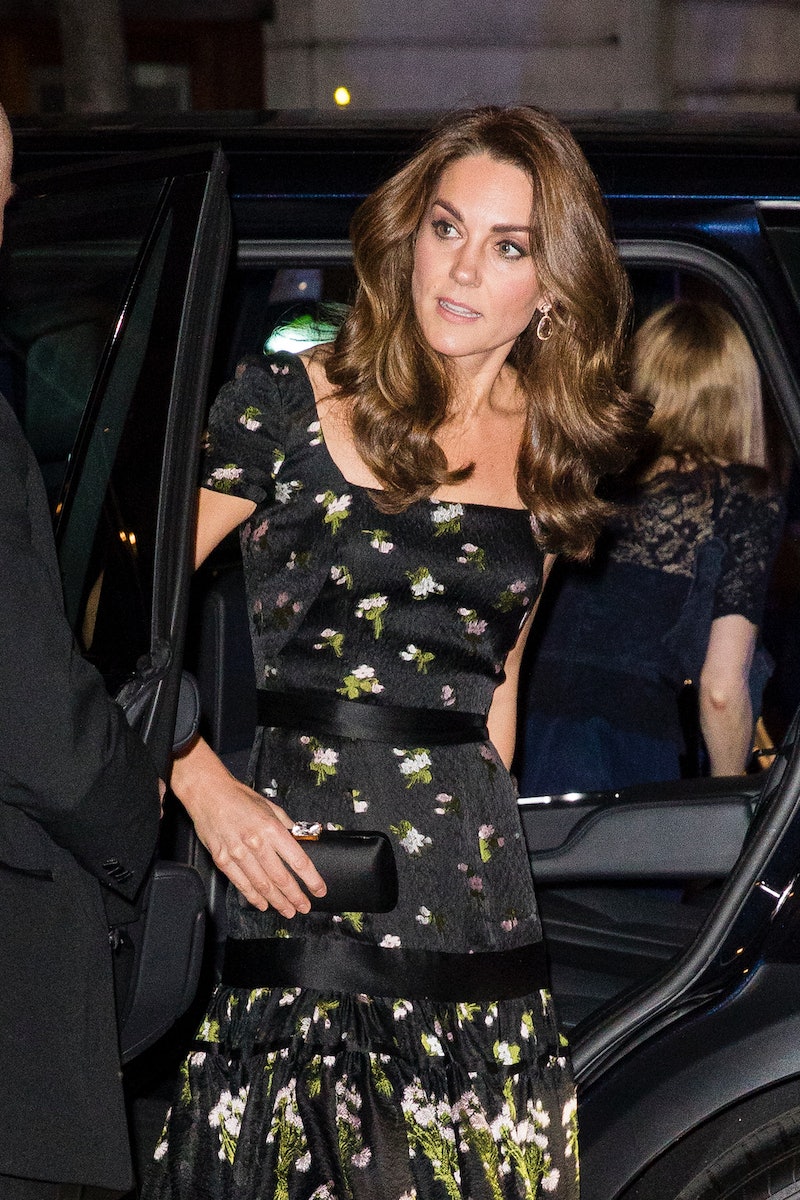 The Duchess of Cambridge isn't above repeating pieces in her designer wardrobe, even if she does have the budget to never wear a single item twice. The royal has been spotted multiple times re-wearing closet staples, but Kate Middleton's Alexander McQueen dress hack is one of her most ingenious. It brings new life to the dress, making you wonder if it's even the same piece.

On March 12, Middleton arrived at the National Portrait Gallery's Portrait Gala in central London, where she is a patron at the museum. The event takes place annually and she is a guest each year. For the occasion, the royal reached into her closet and took out a custom Alexander McQueen floor length gown that had a bit of a grunge edge to it. Tiered with ruffles and sporting a delicate flower print on a black background, it had a definite '90s vibe to it. But being the Duchess of Cambridge, Middleton gave it an easy elegant air.

While it was a stunning dress, some eagle-eyed Middleton fans might think it looks familiar. This isn't the first time that the Duchess wore this designer piece. Middleton wore a very similar dress last year to the BAFTA Awards in 2017. But there was one slight difference: the cap sleeves were not there last year.

The BAFTA Awards gown looked exactly the same as the Portrait Gala frock except for the sleeves, so it could be entirely possible that Middleton had the dress slightly altered for the Gala event. Instead of buying a new piece or requesting a new custom gown to be drawn up, the Duchess could have just had an old one tweaked.

In 2017, the Alexander McQueen gown had off-the-shoulder straps that delicately drooped down Middleton's arms. In 2019, that seemingly same dress has cap sleeves, giving it a more modest air.

This is a great hack that anyone can copy. If you're bored with a particular dress in your wardrobe but don't want to get rid of it, then you can alter its sleeves to give it new personality. Or if you have thick straps to begin with, you can do the opposite of Middleton's hack and push them down to create an off-the-shoulder silhouette.

It's very relatable that Middleton wanted to recycle something in her closet for an event rather than having to go buy a new piece for the evening. But the Duchess isn't above recycling items without getting a tailor involved. In fact, Middleton had another repeat outfit this same week.

The royal wore a red coat dress from Catherine Walker to the Commonwealth Day Service at Westminster Abbey on March 11, but it wasn't the first time she wore the vivid piece.

Middleton originally wore the smart dress nearly five years ago. She donned it while arriving in New Zealand during a royal official trip in 2014.

Middleton clearly doesn't buy outfits only to get rid of them a year later. From repeat outfits to altered pieces, the Duchess knows how to make the most out of her wardrobe.