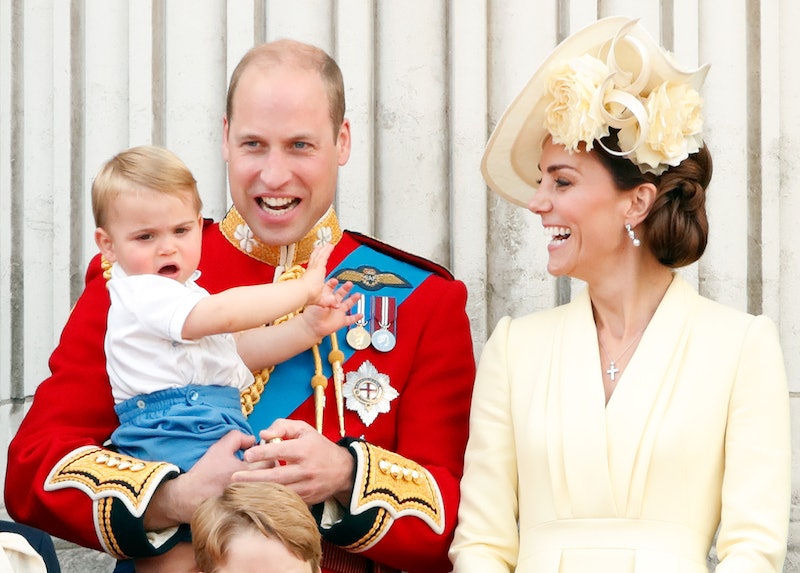 One royal offspring appears to be a Great British Bake Off fan. Kate, Duchess of Cambridge revealed that one of Prince Louis’ first words was a nod to Mary Berry, the show’s revered former co-host. On Dec. 16, Kate and husband Prince William, Duke of Cambridge will appear on Berry’s BBC special A Berry Royal Christmas. In the one-hour special that will follow the trio as they prepare a festive meal for charity staff, Kate told Berry that one of her youngest son’s first words was none other than “Mary” due to her collection of the baking expert’s cookbooks in their home.

“One of Louis' first words was 'Mary’ because right at his height are all my cooking books in the kitchen bookshelf,” Kate said, according to the Daily Mail. “Children are really fascinated by faces, and your [face is] all over your cooking books and he would say, ‘That's Mary Berry.’ So he would definitely recognize you."

Kate and William welcomed Louis in April 2018. The two also share son Prince George, 6, and daughter Princess Charlotte, 4, together. In an interview with the Mail on Sunday’s You magazine prior to the BBC special, Berry revealed that Kate is a “proper cook” and “hands-on mum” to her three children. “She told me she uses my pizza recipe and her children help her make them,” Berry said. “Her own mum used to have my books, and Catherine grew up cooking with her.”

Along with meal preparation segments, A Berry Royal Christmas will follow the trio as they visit The Brink in Liverpool, a dry bar set up by the charity Action on Addiction to provide a space for those suffering with addiction, and The Passage in London, a resource center for the homeless, according to the BBC. The special will conclude with a Christmas party hosted by Kate and William, and even feature surprise guests such as Great British Bake Off winner Nadiya Hussain.

In her You interview, Berry dished about her experience filming with the duke and duchess and called them a “pigeon couple” — a reference to pigeons as monogamous birds that mate for life. “It was just lovely observing them for those three days,” Berry said. “When they are together, he’s constantly touching her arm and looking over at her smiling and she’s the same with him. It was very sweet to see because it was so natural.”

A Berry Royal Christmas will air on BBC One on Monday, Dec. 16.