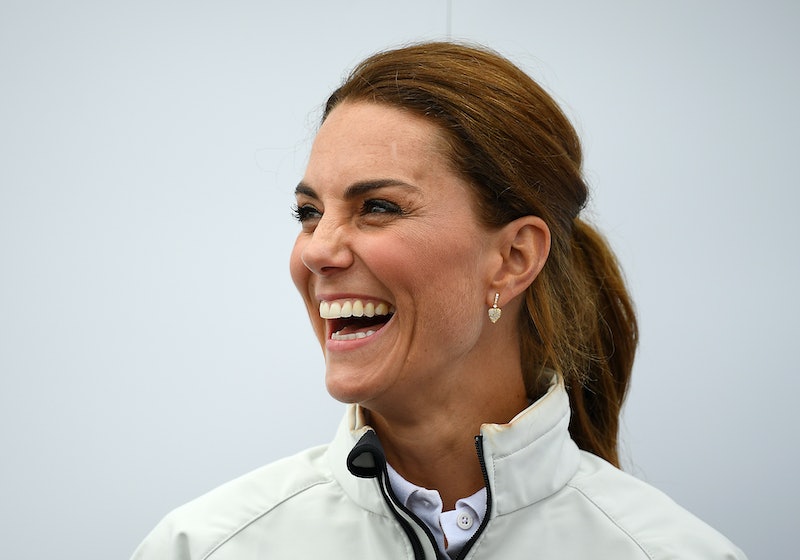 You likely never thought you'd see the words "Kate Middleton" and "blonde" together, but it has happened. The Duchess of Cambridge has gone blonde — well sorta. Kate Middleton's blonde hair is a major change for the royal, but it's not quite as dramatic as it may sound.

On Sept. 5, Middleton along with her husband Prince William accompanied their two oldest children, George and Charlotte, to their first day of school. The moment was particularly special because it was Charlotte's first day ever. While the royal kiddos looked adorable in their school uniforms, it was hard to concentrate on anything other than Kate Middleton's blonde hair transformation.

While dropping off her children, Middleton debuted a new golden brown color that may just be the lightest she's worn her hair since becoming the Duchess of Cambridge in 2007. The color is an all-over golden blonde that's more bronde than a Princess Diana blonde. The look retains the Duchess' deeper color, but does give it more of an autumnal update.

The hue may have changed, but Middleton signature style hasn't. The Duchess' perfectly coifed blowout was in full effect as she bid her kids farewell for the day. After all, why fix what's not broken?

In photos from the morning, Middleton's hair seems to shift as the sun hits it, but the blonde tint to it is obvious in all of them. In fact, there even seems to be a bit of strawberry bronde happening. Perhaps the best part of Middleton's new blonde look, though, is that she's almost twinning with her daughter Charlotte who has naturally dark blonde hair a la her dad's natural hue.

Middleton's new hair color may be somewhat shocking for some fans of the royal family, but it's actually not her first time changing up her look. In fact, it's not even her first time this year. Back in June, Middleton attended an Addiction Awareness Week dinner where she appeared with caramel-toned highlights. The change was subtle, but for Middleton who rarely deviates from her dark roots, it was major.

Hair color isn't the only thing that Middleton switches when it comes to her locks. She's also played with the length. In 2017, she appeared at Wimbledon with a markedly shorter style than her usual long strands. The new cut fell just below her shoulders and was basically a long bob.

A year later, Middleton cut her long locks again, but this time, it was for a good cause. According to ELLE UK, in January 2018, Middleton's hair stylist Joey Wheeler convinced the Duchess that the length was a bit too long. Middleton agreed to the cut, but instead of simply getting rid of the hair, she and Wheeler decided on donating the shorn strands to Little Princess Trust, an organization that makes wigs for children who have lost their own hair due to illness.

Now, Middleton's hair has taken on a different iteration. While the Duchess' signature blowout and dark hair will always be a classic, her decisions to switch things up are always exciting.