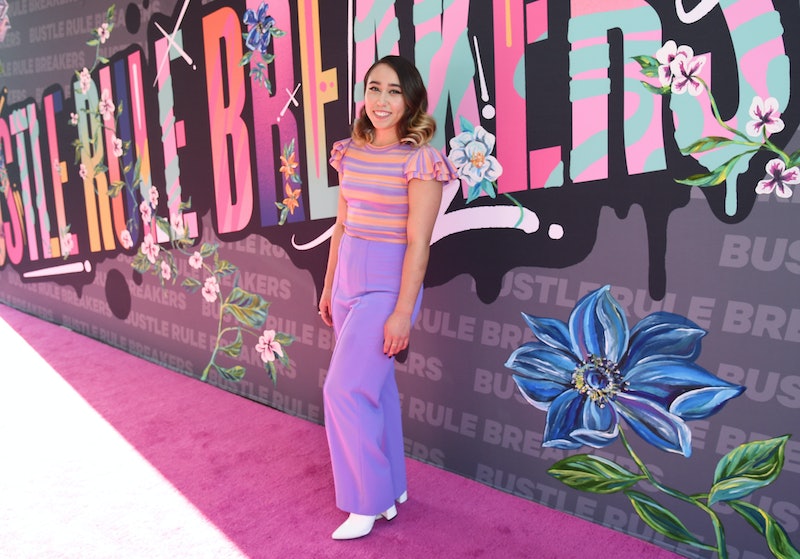 Joy is probably the defining word that comes to mind when you think of Katelyn Ohashi, retired UCLA college gymnast. You likely remember Ohashi from her viral 2018 routine, which skyrocketed her to a perfect 10 score and worldwide internet stardom. But, she's also a six-time All-American, four-time USA Gymnastics’ Junior National team member, and the winner of the American Cup. Her graduation from UCLA in April 2019 may have been her "official" retirement from gymnastics, but that didn't stop the star from showing off her skills in an astounding mini-routine on Sept. 21 at Rule Breakers, Bustle's second annual festival celebrating the year's biggest music makers and trailblazers.

Ohashi, along with her former UCLA Bruins gymnastics coach Valorie Kondos Field, made a special guest appearance at Bustle's Rule Breakers event at The LeFrak Center at Lakeside, Prospect Park in Brooklyn, taking to the pink carpet and later the stage where she continued to put that joy on full display. Ohashi and Kondos Field were among the six women honored in August in Bustle's 2019 Rule Breakers issue celebrating individuals who are challenging the status quo across industries.

There is more that makes Ohashi a trailblazer than her stunning viral performance, though. Recently, the star opened up about her journey to overcome eating disorders and struggles over body shaming in a raw and powerful photoshoot for ESPN's September Body Issue. (I mean, the girl did gymnastics in her birthday suit. If that's not vulnerability, what is?)

These days, however, Ohashi is focused on her health and happiness — and it's so relatable. When she wants to feel strong in her body, Ohashi tells Bustle she throws on some music and "just start[s] dancing around." "That’s what gets me out of my shell,” she says. Her favorite artist to get down to might surprise you, however. "Wheezy, right now, is just my favorite,” she says.

Ohashi also opened up about her love for astrology (she's a *proud* Aries), numerology, and being an Enneagram Type Two — something she shares with Kondos Field, lovingly known as "Miss Val," who was also being honored at the event.

Kondos Field, who also retired from her work at UCLA this year, has been a strong advocate for all of her athletes, and says she hopes she's remembered for training athletes with "dignity, and decency, and respect, and love." She also wants people to know “that you don’t have to strip the joy out of anything, ever,” she says.

While Kondos Field has been a persistent fighter for joy, she's also been a strong advocate for survivors rights — speaking out after several athletes made allegations against the former USA Gymnastics national team doctor, Larry Nassar. Her message for abusers, however, isn't full of anger or resentment, like you might expect. "The best thing you can do and the most courageous thing you can do, is to seek help," she says. "It may curtail you from fulfilling your desires, but it will also keep you out of spending the rest of your life in prison."

While both Ohashi and Kondos Field are closing their gymnastics careers with UCLA, it's not the end of the road. Ohashi is currently working on two books — a collection of her poetry, and a book for teens that focuses on issues like divorce and self-esteem. She's also focusing on her next big leap, into the world of creative content directing. No matter what she does next, she'll do it with joy.