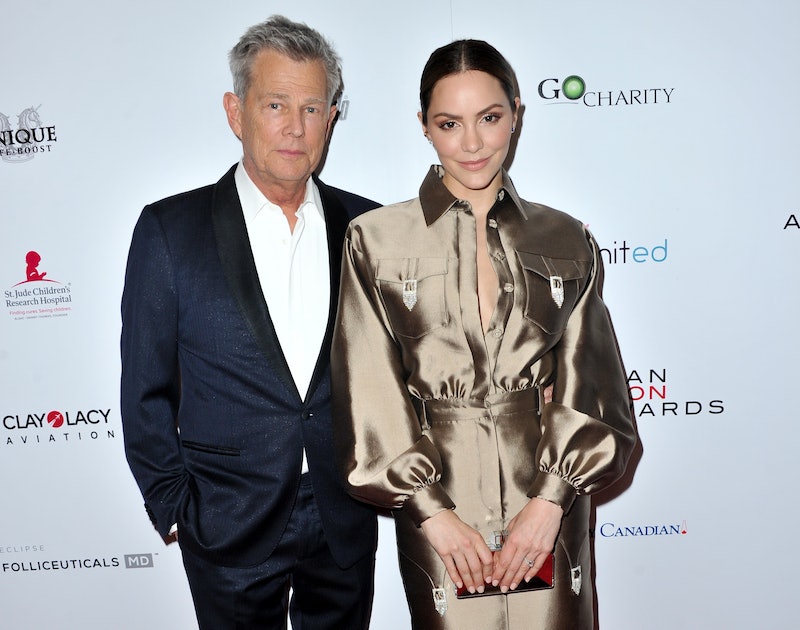 This newly married celebrity couple isn't close in age and they don't care whatsoever. David Foster and Katharine McPhee's age difference has been a highly discussed topic ever since they first started dating in 2017. But, the music producer and former American Idol star are far from concerned about their 34-year age difference. So much so, Foster made it clear how he feels about anyone's negative thoughts and opinions.

According to Us Weekly, Foster briefly commented on the age gap during the couple's recent visit on Vacaya's Inaugural Cruise on the Celebrity Summit. He reportedly declared, "Nobody gives a sh*t." There you have it. Neither Foster nor McPhee care about the age gap or what anyone thinks.

If Foster being a lot older and McPhee being a lot younger doesn't bother them, then it shouldn't bother anyone else. Some people might not want to marry someone who is 30+ years older or younger than them and that's fine. As for McPhee and Foster, they're adults who are capable of making their own decisions and are allowed to do whatever makes them happy. This isn't the first time (and it probably won't be the last) the couple has responded to criticism over their relationship, either.

In July 2018, McPhee defended their romance by tweeting, "y’all should be worrying more about registering to vote and midterm elections than who’s marrying me. thank you for coming to my TED talk." At one point, someone even tweeted her in January, "Is anyone else totally disturbed by @katharinemcphee and her geriatric love? #daddyissues." The singer hilariously replied, "Oh i LOVE that demi lovato song."

If that isn't enough, people have also pointed out how McPhee is younger than some of Foster's children, including Erin Foster, who is 36. For the record, McPhee is 35. Some might think Erin wouldn't be thrilled with her dad marrying someone her own age, but, nope, she doesn't care at all. Actually, Erin and her sister, Sara Foster, have a great relationship with Katharine. The sisters told Us Weekly in May, "We love our future stepmom. Our dad’s very happy and we’re excited." The composer and songwriter is also father to Amy Foster, Allison Foster, and Jordan Foster.

In August 2018, McPhee and Erin even shared a Parent Trap moment that showed just how much they like each other. When a person responded to Erin's comment on McPhee's Instagram, "How awkward is it when your Dad has a younger wife than you are," Erin epically replied, "I've started saying I'm 31, so now she's 3 years older than me. I'm a problem solver." McPhee jumped in on the joke and wrote, "Stop blowing my age cover! The day we say I do, I'm shipping you and your sister off to Switzerland!" To that, Erin posted, "OMG you're gonna Parent Trap us!!! I knew it." They both amazingly referenced the late '90s movie starring Lindsay Lohan.

Foster and McPhee have made it crystal clear that their age difference doesn't matter. Heck, they even got married on June 28. Even though it does seem like a lot of people care about their gap, Foster and McPhee clearly don't. They seem to be very happy and in love, so let's just allow them to go on with their lives without judgment.

More like this
Kanye West Apologizes To Kim K "For Any Stress I Have Caused" In Rare Interview
By Jake Viswanath
Adam Levine Denies Having An Affair — But Admits He “Crossed The Line”
By Jake Viswanath and Radhika Menon
Everything To Know About Taylor Swift’s 10th Studio Album, 'Midnights'
By Grace Wehniainen and Jake Viswanath
How Ghosts Inspired Kesha’s New Music
By Jake Viswanath
Get Even More From Bustle — Sign Up For The Newsletter