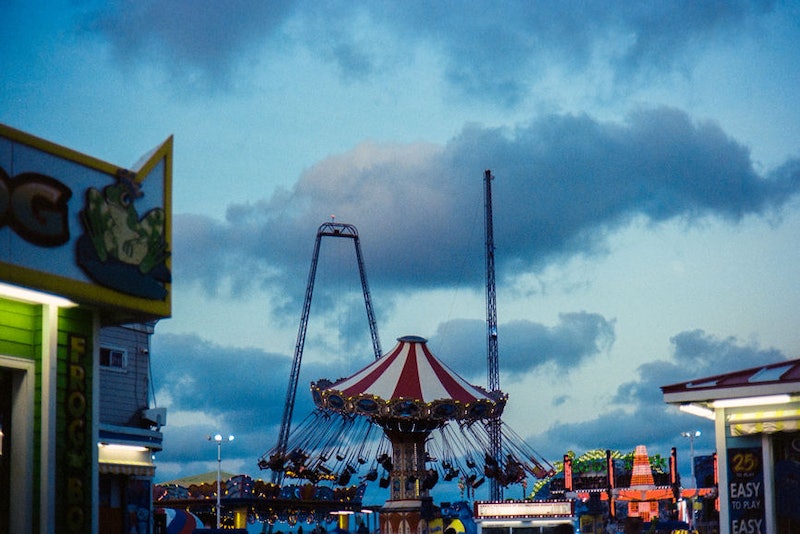 There is something tangibly unsettling about a carnival: It is a space that inspires mystery and magic; that evokes danger and darkness and suspense. Even the etymology of the word — a season or festival of merrymaking before Lent; an instance of merrymaking, feasting, or masquerading; an instance of riotous excess a la a ‘carnival of violence’ — alludes to the potential for something suspect. From Ray Bradbury’s literary classic Something Wicked This Way Comes to the fourth season of American Horror Story, the carnival has always been a place where things are just slightly… off.

It’s this off-ness, however, that also makes carnivals a home for so many people: No matter who you are or where you come from, you can find comfort and solidarity in the circus performers who eat fire, swallow swords, or bend themselves into unnatural shapes. And then, of course, there’s the sideshow where people are making a name and a living by embracing — and flaunting — bodily oddities or physical abnormalities. By seeing them, you too can be seen and accepted as human.

That is the world in which Katherine Dunn’s 1989 novel Geek Love unfolds and ultimately unravels. Dunn didn’t know the book she spent a decade writing would, 30 years later, be a cult classic — and how could she have? No one who sets out to write the Great American Novel actually does it. But Geek Love is a timeless classic that’s relevance has only grown in the three decades since its publication. It is a battle cry against cultural conformity, a massive and poetic f*ck you to the patriarchal standards — and those who fight to uphold them — that would have anyone who is not a white man with a white collar job feel less than worthy, less than valid, less than human.

Geek Love is the story of Aloysius and Lily 'Crystal Lil' Binewski, their traveling "Carnival Fabulon," and, most importantly, their children. When times got tough on the carnival show, Aloysius (Al) and Lil decided to introduce a host of new acts by breeding their own freakshow.

It is a battle cry against cultural conformity, a massive and poetic f*ck you to the patriarchal standards.

Through carefully researched and dosed insecticides, radioactive chemicals, and sundry recreational drugs, Lil gives birth to her children: Arty, "The Aqua Boy" with flippers instead of arms and legs; Iphygenia and Electra, the conjoined twins; Chick, who possesses telekinetic powers; and Olympia, our narrator, an albino dwarf. Each child was "designed," as Al loves to tell them, and each of them blessed, as Lil says, with the greatest gift from their parents: "An inherent ability to earn a living just by being themselves."

Though she ultimately dropped out in 1967, Dunn attended my alma mater, Reed College in Portland, Oregon, and settled down back in Portland in 1975 after traveling Europe. The rain, the green, and the Rose Gardens of Reed all feature prominently in the novel and in my best memories of my 20s. The deepest tie that will always bind me to Dunn’s novel, though, is its exploration of what it means to belong.

I am 31 years old, a Millennial through and through. There is a plethora of stats and figures and unflattering phrases written about my generation — we are lazy, we are entitled, we are self-absorbed, we are largely in debt, we are living in our parents’ basements (the last two are undeniably true for many of us) — but no one sums up the existential angst of people in my generation better, in my opinion, than Paul Angone, creator of All Groan Up: "Right when it was Millennials turn to grab hold of the American Dream, it exploded in our face."

Dealing with the fallout of that explosion has, in the eyes of many members of older generations, turned us into freaks: We’re overeducated and underpaid; we're not getting mortgages and not having children; we're working more than ever without ever stepping foot in an office. We may as well have run off and joined the circus.

At a time when many of Millennials find ourselves in very different places — professionally, geographically, romantically, financially — than we thought we would, few things are more comforting than sinking into a world where being "normal" is the tragedy.

Dealing with the fallout of that explosion has, in the eyes of many members of older generations, turned us into freaks.

I’m not sure what "normal" means today. The gap between where the Millennial generation is and where the rest of the country thinks we ought to be is alarmingly broad: Millennials today own fewer homes, make less money, and are deeper in debt than most Boomers can understand. We are, despite being more widely educated, the first generation since the Great Depression to be worse off than those who came before us.

I come from a long line of cocktail waitresses. Originally from Reno, Nevada, my mother, her sister, and their mother all wielded a drink-laden tray. My grandmother dealt blackjack until her mid '80s and while my aunt and my mom left the hospitality industry in their late '20s, the affinity for socially engaging, physically demanding, think-on-your-feet work runs through my veins the same way performance and a hint of the supernatural courses through the Binewskis. I started working in restaurants when I was 17, started bartending at 22, and now, at 31, can’t imagine not being part of the industry.

But it wasn’t supposed to go that way. Like most parents (most of the good ones, anyways), mine wanted my life to be simpler, easier, and more comfortable than theirs. They wanted a life for me that didn't involve 13-hour shifts and compression socks, or anxiety about how many tips I would get this week. I, like so many Millennials, have not just a Bachelor’s but a Master’s degree, and sometimes I can’t help feeling like a freak for not chasing that corner office or courting the nine-to-five life.

And yet, just like Olympia views her albinism, dwarfism, and humpback as innate and covetable endowments in a world overly populated with "norms," I revel in my unfamiliarity with the nine-to-five world, my bottle cap scratches, and the way I’ll always say behind you when moving through a crowd. There are too many of us career restaurant folks — something like 12 million — to truly be considered a subculture, and the hospitality industry is too involved and active in social activism, sustainability awareness, and education to belong anywhere near a sideshow, but we are happily different in a lot of ways.

We aren’t carnival freaks, but we are a very particular breed, and Geek Love makes me feel whole by association.

I am my best self when I’m behind the bar. It’s the place I learned to trust my instincts, where I was allowed to learn from mistakes, where people saw potential in me and said keep going. It’s where, in many ways, I’m valued not just for what I can do, but who I am; just like Arty and the twins, Chick, and Olympia.

And if that makes me a freak, so be it.