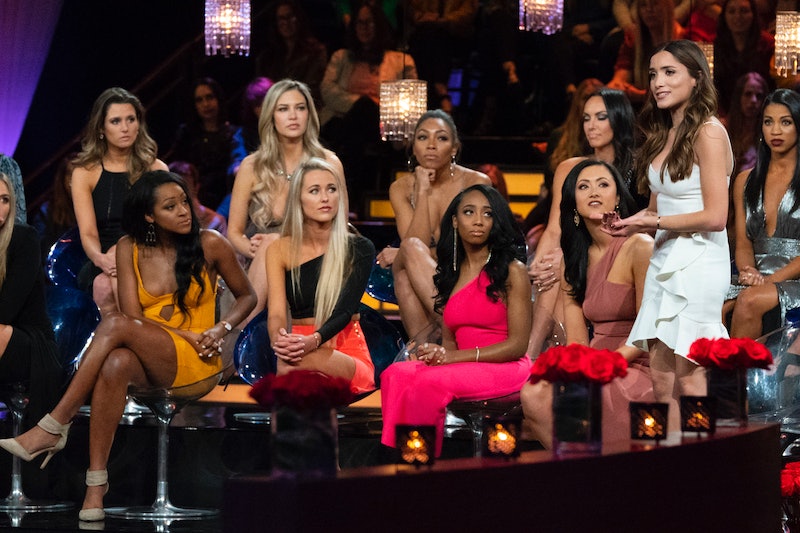 In order to fill time between group dates, fake ambulance sirens, and straight-up sobbing, The Bachelor producers love to make sure that all those little arguments and squabbles get picked up (or reported to the Bachelor himself). One such inter-contestant fight this year was that Cassie and Caelynn allegedly said that they wanted to be the next Bachelorette if they didn't get Colton. Well, if you thought we've moved on from that fight, you were wrong, because Katie and Caelynn's Women Tell All Fight took a dive into the not-so-distant Bachelor archives.

Katie didn't last for a long time on The Bachelor, but that's not stopping her from trying to grab an armful of Instagram sponsorship opportunities by voicing her opinions during Women Tell All. Katie alleges that, on a bus trip in Singapore, Caelynn and Cassie (who isn't at Women Tell All because she made it to the top three ladies), who are besties, were saying that if either of them didn't make it to the end, they'd both want their BFF to be the next Bachelorette. Is that crazy, that you would cheer for your friend to get a big opportunity and her own show? Not from where I'm standing, but according to Katie and some of the other contestants, this is Bachelor high-level treason.

It all morphed into a case of she-said, she-said, as so many of these situations do. Katie said that Caelynn said she just wanted to travel and take advantage of the perks of the show, Caelynn maintains she didn't say that. Katie said she got Caelynn to admit it in a phone call after filming was over, Caelynn says that's wrong, too. Someone named Jane said some words. Hannah B. jumped in for a minute, too, to say that Caelynn was lying. Here's where this Bachelor commentator will jump in and say, "who cares?" We all know that Hannah B. and Caelynn don't get along anyway, so why would we trust this? You guys, I'm so tired of listening to these women yell at each other.

Caelynn, who is a definite favorite for The Bachelorette now that Colton has cut her loose, has a lot to lose in admitting to saying those things — if she said them in a conniving way (I'm not saying she did). But why are we having this fight? Why is Katie bringing this up? It sounds like sour grapes on Katie's apart because Katie was getting sent home and she wanted to create some drama before she left. Some (wo)men just want to watch the world burn, as they say. Why do we care if two friends were just cheering for the other in a really strange, esoteric, manipulated situation? Women Tell All always jumps the shark (or in this case, the fence), but man, guys. Let's focus more on why Colton cries so much or how his pants didn't rip when he jumped said fence than this crap interpersonal drama. It's just not interesting anymore to watch women fight about nothing.