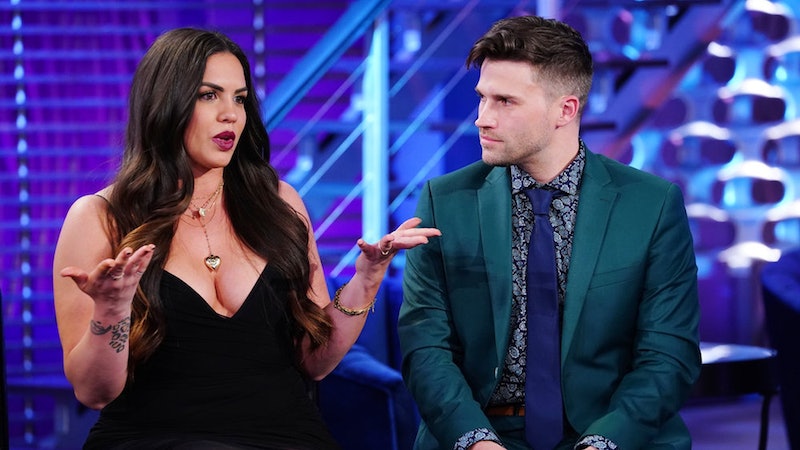 The drama never ceases for the Vanderpump Rules cast. Katie Maloney and Tom Schwartz got a marriage license finally, according to E! News. It appears there's a good chance the reality TV couple are also planning on getting married again, but this time in Las Vegas with their fellow Bravo costars in tow. At this time, nothing has been confirmed regarding Katie and Schwartz reportedly obtaining a marriage license in Vegas, in addition the two having a second wedding.

This news comes on the heels of Lance Bass claiming that Katie and Schwartz aren't legally married. Their wedding was in August 2016. During a July episode of the Bleav in Reality Bytes podcast (via Us Weekly), Bass opened up about signing Jax Taylor and Brittany Cartwright's marriage license (he officiated their wedding) and then said, "So, yeah, I hope that [Jax and Brittany] are married because we just found out that Tom and Katie are not married." Bass also claimed, "They did not send in their materials right. So, they are not married." (Bustle previously reached out to Katie and Schwartz's rep for comment, but did not receive an immediate response.)

The former *NSYNC member later apologized for apparently spilling the beans. As reported by Us Weekly on July 17, Bass said on ABC's Strahan & Sara, "Lot of times people forget that I've been in entertainment news for the last 15 years. So, you know, when there's pieces of nuggets out there, I'm going to talk about it."

"I didn’t know it was a secret," Bass also said. "I don’t know reality television like that. I apologize, I’m sorry. You’ll just have to watch [Vanderpump Rules]. You’ll have to see the show to see what really happens."

At this time, Katie, Schwartz, and the rest of the Pump Rules cast hasn't commented on Bass' statements. And now E! News is reporting they have a marriage license. Whatever is going on, one thing remains certain and that is the Pump Rules cast members went to Vegas with Schwartz and Katie.

Nothing has been confirmed yet regarding Katie and Schwartz's rumored second wedding, but if they really are saying "I do" all over again, it will probably be filmed for the Bravo series. In many of the Instagram stories shared by the group of Bravolebrities, cameras were present. If that isn't enough, Bass also teased on the Bleav in Reality Bytes podcast about Katie and Schwartz's reported snafu, "I think that might be a little storyline, yeah."

Let's keep those fingers crossed that the next season of Pump Rules clears up of all the confusion, because fans really need to know the truth.