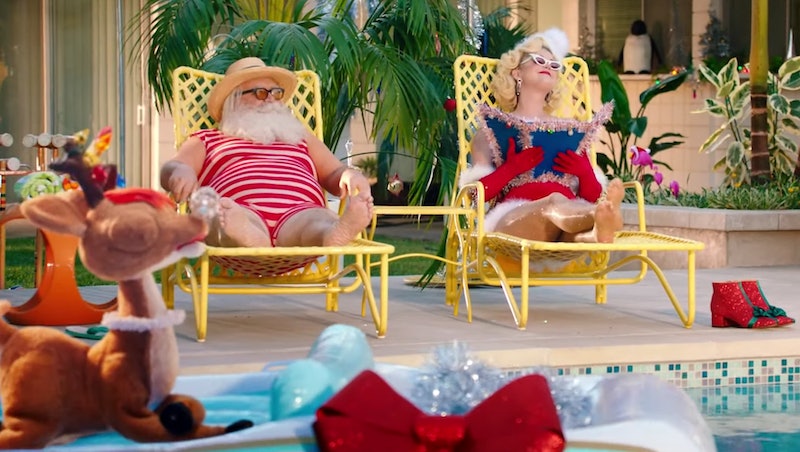 In an ode to classic holiday films, Katy Perry debuted her “Cozy Little Christmas” music video on Monday. In the new video for her holiday tune "Cozy Little Christmas," which Perry initially released last year exclusively on Amazon Music, the "Dark Horse" singer channeled classic ‘60s and ‘70s holiday stop-motion films such as Santa Claus is Comin’ to Town, The Year Without a Santa Claus, and Rudolph the Red-Nosed Reindeer.

In the clip, Perry gets cozy with Santa Claus and beloved stop-motion holiday characters strongly resembling Rudolph the Red-Nosed Reindeer, Frosty the Snowman, and Snow Miser as they decorate a Christmas tree, prepare a holiday meal, and sunbathe poolside on yellow lounge chairs. It must be a California Christmas, indeed, as Perry also gets a massage with Santa and Rudolph relaxes on a pool float.

“Cozy Like Christmas” was unveiled as part of Perry’s very own virtual advent calendar called 25 Days of Cozy, which offers surprises each day in December on the singer’s website. The release of the “Cozy Like Christmas” video marked the second day of the advent calendar’s surprise, while yesterday’s inaugural offering teased the video with a photo of Perry in the pin-up Santa outfit worn in the video.

On Twitter on Monday, Perry teased the video and wrote, “Day 2 of the 25 Days of Cozy: another peek into the life of Santa and Merry Perry (Santa’s second wife!)”

The release of “Cozy Like Christmas” comes after Perry released her singles “Harleys in Hawaii,” “Small Talk,” and “Never Really Over” this year. She also collaborated with Daddy Yankee on the remix of “Con Calma" in April. Earlier this year, Perry famously appeared in the music video for Taylor Swift’s “You Need to Calm Down” and suggested that her long-running feud with Swift had finally been put to rest. Upon the video’s release, Perry took to Instagram Story to share a photo of the two from the set. She wrote alongside a photo of the two dressed in a hamburger and fries suit, “This meal is BEEF-free.”

During an appearance on the Ellen DeGeneres Show in September, Perry said of the demise of their feud, “I’m all about redemption and forgiveness and for setting an example for those younger people, that it can be cool to ask for forgiveness, and confront someone that you may have an issue with... and talk it out.”

More like this
Here’s How You Can Watch The Grammys 2023 In The UK
By Emma Madden and Catharina Cheung
All The Ways You Can Watch The Super Bowl In The UK
By Asyia Iftikhar and Darshita Goyal
You Can Still Stream The 2023 Grammys Even If You Don't Have TV Or Cable
By Grace Wehniainen
Beyoncé Just Announced Tour Dates: Here's How To Cuff Tickets To Her 2023 Shows
By Jake Viswanath
Get Even More From Bustle — Sign Up For The Newsletter
From hair trends to relationship advice, our daily newsletter has everything you need to sound like a person who’s on TikTok, even if you aren’t.