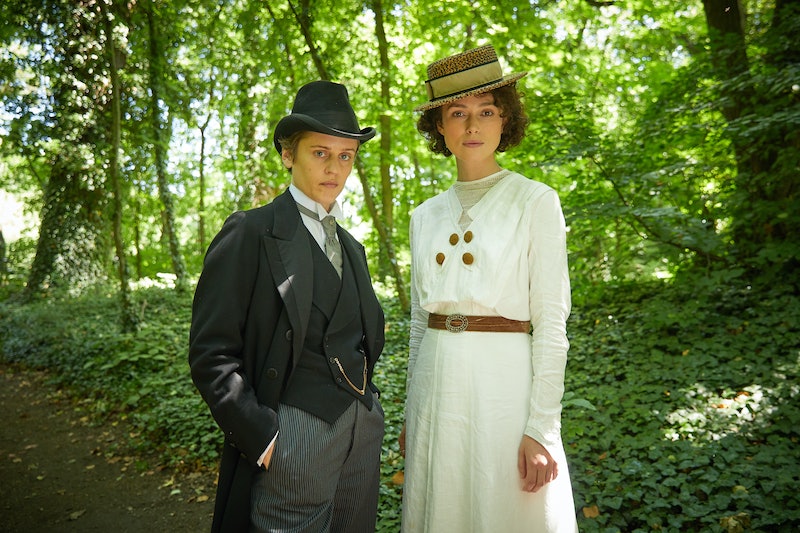 As French author Colette tells us, "the hand that holds the pen writes history." Never has the male ownership at the heart of that word — his-tory — been more fitting, or aggravating, than in Keira Knightley's new film Colette. Set in Paris at the turn of the 20th century, the film tells the story of Sidonie-Gabrielle Colette. Released in cinemas across the UK from Wednesday 9 January, Bustle have teamed up with Lionsgate to host a screening of Colette to which you, our Bustle readers, are invited. Read on to find out more.

Now best known as the author of Gigi, which as Time reports was turned into an Audrey Hepburn-helmed musical in the '50s, Colette focuses on the writer's early life. In order to give expression to her voice and assist her creatively challenged husband (played by Dominic West), Colette begins to write under his name, creating the Claudine novel series. It becomes a blockbuster success, though after Colette requests her name be added as an author, tension and violence ensues. The film documents Colette's journey to liberate herself from the abusive relationship and take possession of her life, a message which is still powerfully resonant today.

“Her story of a man trying to shut up a woman and a woman being stifled by a man’s ego is still going on today and has been going on throughout history," director and co-writer Wash Westmoreland told Variety. "There have been seismic changes at various points, where you have things like the suffragette movement, and we’re having another tectonic shift right now. Women are saying, ‘No more.'"

This relevance was part of what attracted Knightley to the project, along with the complexity of Colette as a character. "I think we need more characters for women like that, that you can see and go 'Ooh, not saintly, not nice necessarily, but utterly inspiring,'" she told Deadline. "The way that she lived her life and explored her sexuality, and explored her gender — again, without shame — is super interesting because I think still in 2018, that’s something that many people are trying to do, and she actually did."

The conversation around gender and identity is central to the film. "Within her writing, Colette was questioning the idea of gender and the idea of what was naturally feminine as opposed to society’s take on being feminine," Knightley told Variety. "Colette had female lovers and had what I suppose we would call a transgender lover. She felt that it was her right to experience pleasure and to give pleasure. That’s still a revolutionary idea for women."

To celebrate this tale of feminist resistance, Bustle has teamed up with Lionsgate to screen the film at 6:30 p.m. on Tuesday 8 January at a central London location. The film will be followed by a Q&A between producer Elizabeth Karlsen (Carol, On Chesil Beach, Made in Dagenham) and Bustle UK's executive editor, Charlotte Owen.

We can't think of anyone better to watch the film with than you, our Bustle UK readers. Simply enter your name and email here for a chance to attend. Winners will be selected at random, and if successful you will receive an email with details of the location.

More like this
At 28, Melanie C Was Falling In Love & Reclaiming Her Confidence
By Olivia-Anne Cleary
Alan Rickman's Diary Reveals Why He Considered Leaving 'Harry Potter'
By Darshita Goyal
KiKi Layne & Ari'el Stachel Call Out 'Don't Worry Darling' Over Cut Scenes
By Sam Ramsden
Jonathan Bailey's Latest Role Is A Huge Departure From 'Bridgerton'
By Sam Ramsden
Get The Very Best Of Bustle/UK