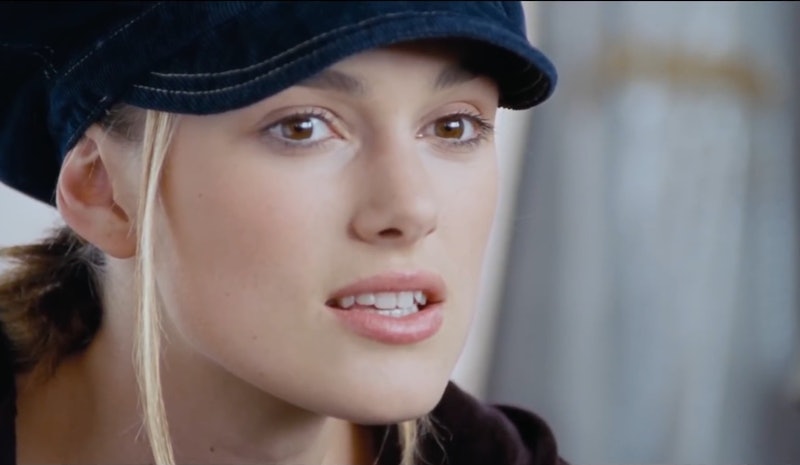 To Mark, Juliet may have been perfect, but Keira Knightley's Love Actually hat has a bit of a, well, blemished history, you might say. When asked if she'd consider Juliet's dark blue newsboy cap from the classic 2003 ensemble holiday film a "fashion regret" during a BBC Radio 1 "Movies That Made Me" interview, Knightley spilled the tea. "Do you know why the hat was there?" she asked of the topper she wore in the scene where her character first realizes that her husband's best friend Mark (Andrew Lincoln) is in love with her while watching the video he shot at her recent wedding. “I had a massive spot in the middle of my forehead.”

She can laugh about it now, however, as she added:

“This is the problem with being 17 and being in films ... and it was humongous, so there was no choice but to find a hat to cover it 'cause there was no lighting, there was no makeup that was gonna cover it.”

Further joking that fans are "going to watch that film in a totally new way now" she also playfully mentioned the "extreme embarrassment" she felt when arriving to set on that particular day. “I remember coming in in the morning, being like, ‘Oh wow, I’ve got another head on my head. What are we going to do?’" Knightley, who's currently starring in The Nutcracker and the Four Realms recalled in the interview. "There’s nothing we can do about this... But there is, because you can always put a hat over it! I was actually very grateful for that hat. I have a lifetime of gratitude for that hat.”

“There was a lot of hype around it. And then actually when it came out, it didn’t do as well as everybody thought it was gonna do, and particularly not in America. So what’s extraordinary about it is that it, then — maybe about 5 years after it came out — really started to build up this whole Christmas movie... And in America, it’s actually bigger than it is [in England]! They’re really obsessed by it.”

Fans, of course, got a special gift last year when most of the all-star cast reunited for a Love Actually "sequel" of sorts, as part of an NBC Red Nose Day charity special. The roughly 15-minute short called Red Nose Actually first aired in the UK before making its stateside debut on NBC's May 2017 telethon.

Lincoln (who, of course, went on to star as Rick Grimes in AMC's The Walking Dead) appears in the video with full facial hair and put a new spin on his iconic "To me, you are perfect" cue card scene, hilariously holding up a sign for Knightley that says, "Do you like the beard?"

In a Today show behind the scenes video, Lincoln also had some thoughts about the film — and one scene in particular. "I do think making a movie about all the different qualities of love is a really neat idea, and I'm not sure that there's been one up until Love Actually," he said, sitting alongside Knightley and their fellow costar Chiwetel Ejiofor (Juliet's new husband Peter). "And I think that you've got Hugh Grant dancing ridiculously, you've got all the things you need..."

Grant, who played a UK prime minister, had a different take. As he noted later in the same video, "I dreaded that dancing scene in Love Actually more than words can say."

While Knightley may be right that fans will never see her wardrobe accessory in the same light, the relatability of the matter is just another thing to love about her, as well as the movie.

More like this
The 'Hocus Pocus' Sequel Finally Has A Release Date & It Makes Total Sense
By Shannon Barbour and Radhika Menon
Everything To Know About 'My Big Fat Greek Wedding 3'
By Grace Wehniainen
Everything To Know About 'Scream 6'
By Jack Irvin and Jake Viswanath
Emma Thompson, Lashana Lynch, & Stephen Graham Lead Netflix’s 'Matilda'
By Sophie McEvoy
Get Even More From Bustle — Sign Up For The Newsletter