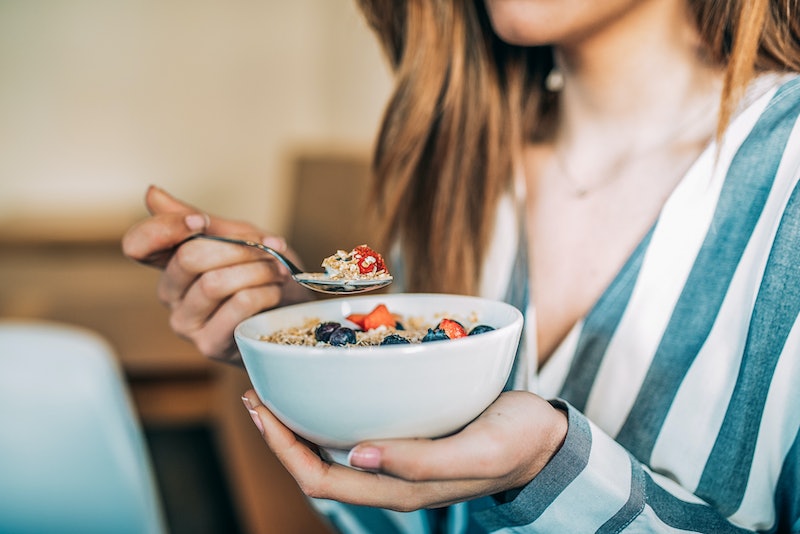 According to the CDC and the FDA, Kellogg's Honey Smacks cereal has been linked to a Salmonella outbreak that has extended to a reported 74 cases across 31 states. Kellogg's has voluntarily recalled Honey Smacks cereal, and the CDC is recommending that consumers do not eat it. According to the CDC, the recall affects cereal distributed throughout the U.S. as well as Guam and Saipan, and outside of the U.S. in Costa Rica, Guatemala, Mexico, the Caribbean, and Tahiti. (Bustle has reached out to Kellogg's regarding the recall and will update upon response.)

Kellogg's issued the recall on June 14, which affects 15.3 oz. and 23 oz. packages distributed with "best if used by" dates between June 14, 2018 through June 14, 2019, which can be found printed at the top of every Honey Smacks box. The UPCs affected include 38000 39103 and 38000 14810, which can be located at the bottom of each box. In light of the recall, the CDC also recommends throwing away any remaining cereal, and thoroughly washing any containers the cereal may have come into contact with in "warm, soapy water," including bowls, utensils, and plastic storage containers.

Though the investigation regarding the Salmonella outbreak is ongoing, the link between the outbreak and Honey Smacks cereal was the result of a series of interviews conducted with 39 of the 74 patients, whose cases range in date from March 3, 2018, to May 28, 2018. Thirty of those 39 patients interviewed indicated that they had recently consumed cold cereal, and 14 specifically reported consuming Honey Smacks. The reported cases include consumers between the ages of one and 87, and have led to 24 hospitalizations, and no deaths reported at this time.

According to the CDC, this particular outbreak is Salmonella Mbandaka; the FDA says symptoms most often include "diarrhea, fever, and abdominal cramps" in patients, and can last four to seven days. Symptoms most often present within 12 to 72 hours of contact with Salmonella. Hospitalizations are most often brought on by severe diarrhea, which, according to the FDA, is the result of infection that can "spread from the intestines to the blood stream and then to other body sites and can cause death unless the person is treated promptly with antibiotics". As with most infections involving food, the most susceptible populations to the illness are children under the age of five, the elderly, and people with weakened immune systems.

According to the FDA, the 31 states where cases have been reported include Alabama, Arizona, California, Connecticut, Georgia, Illinois, Indiana, Kentucky, Louisiana, Massachusetts, Maryland, Michigan, Mississippi, Montana, North Carolina, New Hampshire, New Jersey, New York, Ohio, Oklahoma, Oregon, Pennsylvania, Rhode Island, South Carolina, Tennessee, Texas, Utah, Virginia, Washington, Wisconsin, West Virginia. The CDC notes that there may be more cases after May 22, 2018, as it typically takes two to four weeks for cases to be reported. Both the CDC and the FDA note that they will be updating their reports about the Salmonella outbreak as the investigation continues and more information becomes available. Approximately 400 deaths in the U.S. are linked to Salmonella infections each year, the FDA notes.

Kellogg's urges customers who have purchased the cereal to dispose of it and contact the company for a full refund, which they can do at a web page for the recall. Customers with further questions can also contact Kellogg's at 1-800-962-1413 on Monday – Friday from 9 a.m. to 6 p.m. ET, or Saturday and Sunday from 10 a.m. – 4 p.m. ET. According to Kellogg's, no other product is affected by the voluntary recall at this time.