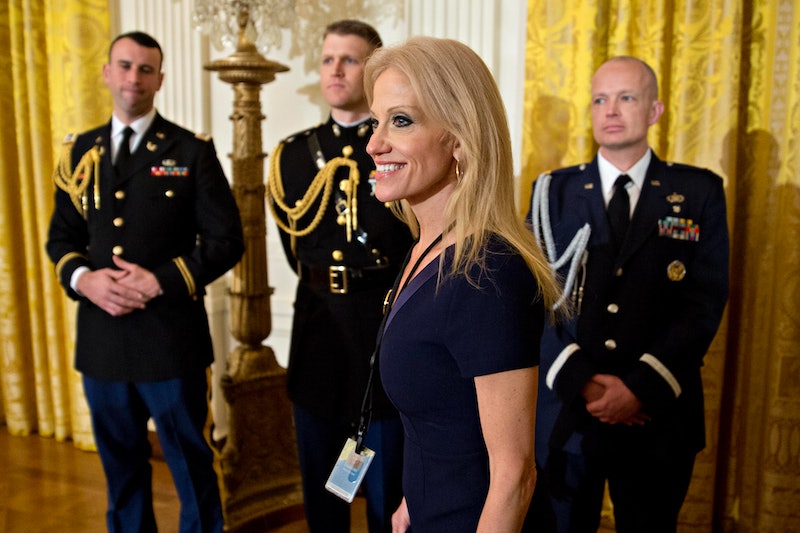 As Donald Trump's former campaign manager and now senior adviser in the White House, Kellyanne Conway drew widespread ridicule last week after she referenced the nonexistent "Bowling Green massacre" in an interview with MSNBC's Chris Matthews. "I bet it's brand new information to people that President Obama had a six-month ban on the Iraqi refugee program after two Iraqis came here to this country, were radicalized and they were the masterminds behind the Bowling Green massacre," Conway told Matthews. She added that the nonexistent massacre "didn't get covered." Conway subsequently took to Twitter to defend herself, linking to an old ABC News report about refugee terrorists and indicating that she meant to say "Bowling Green terrorists" instead of "massacre." In another Tweet, she wrote, "honest mistakes abound."

But is that really what happened here? Some critics have suspected that the "Bowling Green massacre" was more than a mere slip of the tongue and could potentially do more damage than a regular gaffe. "Conway’s false statement stands out because it is simultaneously inaccurate and has the potential to be extremely inflammatory," Clare Foran noted in an article for The Atlantic last week.

This week, there's new evidence that Conway's "Bowling Green massacre" was more than a one-time slip-up. In a report published Monday on Cosmopolitan.com, a reporter who had recently interviewed Conway, Kristen Mascia, said that Conway had referenced the "massacre" in detail during an on-the-record conversation with one of their reporters on January 29.

According to Mascia, Conway also referenced the massacre in connection with Obama temporarily banning Iraqi refugees, telling Cosmopolitan that he did so because

...two Iraqi nationals came to this country, joined ISIS, traveled back to the Middle East to get trained and refine their terrorism skills and come back here and were the masterminds behind the Bowling Green massacre of taking innocent soldiers' lives away.

Cosmopolitan presumed that Conway's comments were in reference to the arrests of two Iraqi refugees in Kentucky for engaging in terrorist activity. The arrests were real; the massacre was not. When Cosmopolitan reached out to Conway for comment on Friday, according to the report, she told them, "It was a plot to massacre and they were Bowling Green terrorists. That's what I should have said. I clarified."

When the publication reached out again on Sunday in a text exchange, Cosmopolitan noted that Conway responded, "Frankly they were terrorists in Bowling Green but their massacre took place in Iraq. At least this got clear-thinking people to focus on what did happen in Bowling Green. I gave new life to that ABC News investigative report and the fact that these two Iraqi nationals came to the US with a plan of death and destruction."

While honest mistakes certainly do happen, Mascia's account of Conway's comments is concerning because it indicates that Conway may have believed that "massacre" was an accurate way to describe an event that did not occur. As the country's problem with fake news worsens — and as news media consumers must grapple with what Conway calls "alternative facts," the dissemination of false information by a high-ranking White House official like Conway is extremely worrisome.