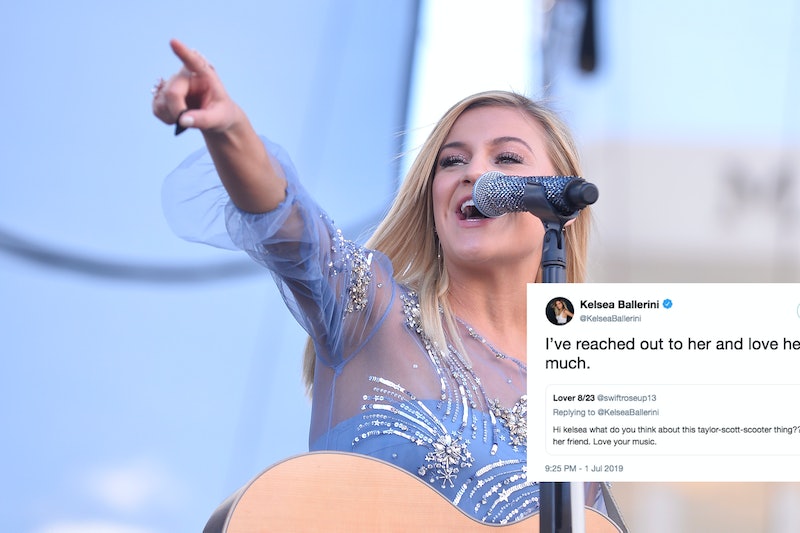 While some celebrities have been more vocal than others, sides are definitely being taken in the Taylor Swift and Big Machine masters drama. One country star recently addressed the matter with a simple tweet, making clear she supports her friend. Yes, Kelsea Ballerini has Swift's back amid Scooter Braun's acquisition of her former label. This shouldn't come as a huge surprise, though, seeing as how Ballerini has long-counted Swift as one of her biggest inspirations.

Now, before you get too excited about Ballerini throwing her hat into the ring, it's worth noting that she didn't exactly take a definitive side, per se. She didn't trash Braun or Big Machine Label Group's CEO, Scott Borchetta. She didn't touch on Swift's accusations of "bullying" in a Tumblr post that declared Braun's acquisition the "worst case scenario." She didn't really say whether or not she sways one way or the other on the matter at hand, in terms of who's in the wrong. What she did say, however, is that she's trying to be supportive of her friend, and she did so in a straightforward and classy way.

On July 1, a fan on Twitter inquired of Ballerini, "Hi kelsea what do you think about this taylor-scott-scooter thing?? I know you are her friend. Love your music." The singer's response? "I’ve reached out to her and love her very much." Very kind, and very diplomatic.

Ballerini has never been shy about discussing her admiration for Swift, and has welcomed the positive parallels people have drawn between their two careers. During an interview with Rolling Stone back in 2015, she opened up about those comparisons, and what she respects the most about Swift's long-standing success.

"I’m such a huge Taylor Swift fan and have been on that side of it with her for so long," she told the outlet at the time. "If there’s anyone’s career who I’d like to have a sliver of similarity to, it would be hers. So I’m glad for the comparisons. The way she puts songwriting and her fans at the forefront, instead of letting everything else fall where it’s supposed to fall, that’s always something I’ve really respected about her. So if people see that in me, I really hope it’s what it is."

Later, in October 2018, Ballerini revealed it was Swift who inspired her to learn how to play music in the first place, which is something she hopes she's able to instill in her own fans as well. "I remember watching specifically Taylor and being like, 'I gotta play guitar because she plays guitar,'" she told CMT. "When people say, 'I learned how to play my guitar,' or 'I just wrote my first song,' at a meet-and-greet, that really matters to me."

It's unclear whether or not Ballerini has a relationship or associates with Braun at all, but her allegiance to Swift is undoubtedly strong. If she does have specific thoughts on the recent masters drama, though, for now, she's keeping them to herself. Instead of getting involved or calling people names, she's just out there trying to be a good friend — and that's the best thing that anyone could ask for.