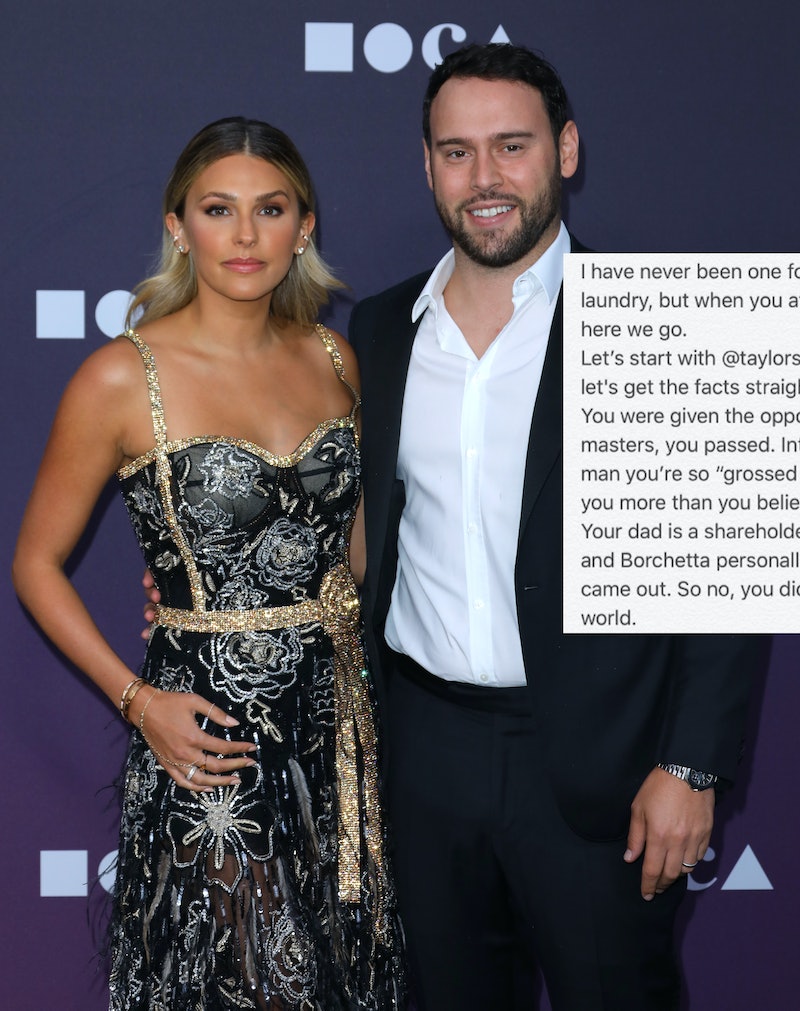 At this moment, Scooter Braun has not publicly responded to Taylor Swift's Tumblr post about his acquisition of her music catalog, but plenty of other people have. For example, Scooter's wife Yael Cohen Braun addressed the Swift situation in a lengthy Instagram post on Sunday. As expected, she came to her husband's defense.

"You were given the opportunity to own your masters, you passed. Interesting that the man you’re so ‘grossed out’ by believed in you more than you believe in yourself."

She also tried to dispute Swift's claims that she had zero notice about the business deal, writing, "Your dad is a shareholder and was notified and Borchetta personally told you before this came out. So no, you didn’t find out with the world." (News was made public on Sunday that Braun acquired Big Machine Label Group from Scott Borchetta, which is what sparked Swift's Tumblr message.)

Additionally, Yael strongly denied Swift's bullying accusations about her husband. She wrote, "Girl, who are you to talk about bullying? The world has watched you collect and drop friend like wilted flowers. My husband is anything but a bully, he’s spent his life standing up for people and causes he believes in." Then Yael claimed that Swift was the one doing the bullying: "Beyond that, it’s easy to see that the point of putting this out was to get to bully him. You are supposed to be a role model, but continue to model bullying."

To recap this whole situation, in Swift's Tumblr post, she blamed Scooter for "incessant, manipulative bullying." In Swift's eyes, an example of this happened in 2016 when Kim Kardashian leaked a phone conversation that made it seem like Swift gave Kanye West permission to reference her in his song "Famous." Yael addressed this in her Instagram note, writing,

"[Braun is] a manager, not God. He cannot control the actions of other humans, even ones he manages. Don’t blame him because Kim caught you in a lie, it’s embarrassing I know but adults own up to their mistakes. We learn and grow from them, we don’t divert blame and blur the lines of reality to suit our needs."

According to Yael, her husband has "stood up for" Swift "behind closed doors and "reached an olive branch out to [her] on numerous occasions." She continued, "Scott (Scooter) was excited to work and build with you. How embarrassing this temper tantrum is because you didn’t get your own way. He believes in and supports you, I sincerely hope you can learn to love and believe in yourself the way my husband does." Ultimately, Yael concluded her post, "And I hope you have the dignity, class, and kindness to leave your fans out of this and have an open discussion. Tumblr can't fix this, a phone call can."

This situation has turned into an elaborate case of he-said, she-said with many people speaking out. After the Tumblr post, Justin Bieber came to Scooter's defense and took responsibility for offending Swift with his previous social media activity. Scooter's new client Demi Lovato insisted that he's not one of the "bad people in this industry" on her Instagram Story.

Founder of the Big Machine label Borchetta also responded to Swift's claims and alleged that he gave the singer a chance to own her music. (Bustle reached out to Swift's rep for comment on Borchetta's statement, as well as Yael's, but did not receive an immediate response.)

Meanwhile, Halsey sided with Swift by tweeting out messages of support, and Swift's longtime friend Cara Delevingne came to her defense as well.

Now, the world is waiting to see what Scooter has to say in response to Swift's Tumblr post. And of course, Swifties are eagerly anticipating her next social media move, and most importantly, some future song lyrics addressing the situation.

More like this
The Ticketmaster Senate Hearing & Taylor Swift Tickets Debacle, Explained
By Jake Viswanath
Taylor Swift May Miss The 2023 Grammys For Reasons Fans Know “All Too Well”
By Jake Viswanath
The 12 Most Controversial & Unexpected Grammy Moments Ever
By Jake Viswanath
Jay-Z Is Performing At The Grammys, Meaning Beyoncé Might Actually Show Up
By Jake Viswanath
Get Even More From Bustle — Sign Up For The Newsletter
From hair trends to relationship advice, our daily newsletter has everything you need to sound like a person who’s on TikTok, even if you aren’t.