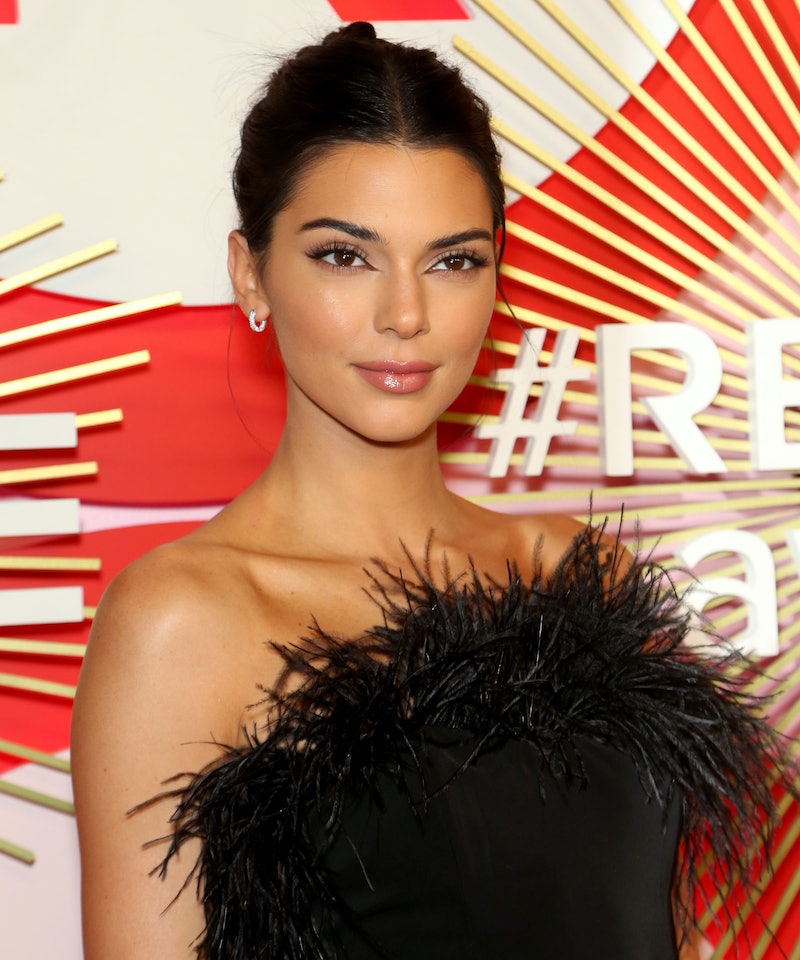 Out of all the Kardashian-Jenner sisters, Kendall Jenner is definitely the most private when it comes to sharing details about her personal life. For the most part, she really doesn't share much. She's just spotted here and there, leaving fans to piece things together. But on Jan. 29, Jenner and Kourtney Kardashian cheered on Ben Simmons at the Philadelphia 76ers game against the Los Angeles Lakers in California, according to E! News. As fans know, rumor has it that the model and the basketball player are in a romantic relationship, but as expected, Jenner has not commented on the speculation at all.

E! News reported that Jenner, Kardashian, Simmons, and two friends all went out for dinner together at the restaurant Craig's in West Hollywood after the basketball game. So, was that a date? It's currently unclear, but it sure does seem like these two are romantically involved. She's attended several games in the past, and they've even flirted it up with some Instagram comments.

For example, on Jan. 9, Jenner shared two behind-the-scenes videos of herself modeling bathing suits. She captioned the videos, "I do my own stunts." Clearly, Simmons was impressed by those "stunts" since he commented on the post. He told the model, "Come here." Jenner replied with a race car emoji, implying that she was on her way.

Considering how Jenner is when it comes to her personal life, this interaction is actually a pretty big deal, especially since she actually responded.

On Dec. 26 2018, Jenner shared a close-up solo shot that prompted the basketball player to respond with some drooling emojis. However, she did not respond to the Instagram comment publicly that time. Maybe they discussed in private instead?

Either way, Jenner and Simmons' interaction goes beyond Instagram flirtation and attending one basketball game. Near the end of last year, People shared photos of Jenner at another Sixers game with Simmons' mom Julie Simmons sitting courtside. That could be a sign that Jenner and the basketball player are getting pretty serious, if they're both spending time with each other's family members.

And back in November, Jenner was at a Sixers game against the Cleveland Cavaliers, the team that sister Khloé Kardashian's boyfriend Tristan Thompson plays for. According to People, it even looked like Jenner was "booing" Thompson. So of course, a fan decided to ask Khloé about this on Twitter, "I’m confused by @khloekardashian's tweets. One minute she’s calling TT out, then she’s defending being in his life, then she’s laughing at her sisters heckling him. I just wanna know where we stand Koko so I know how to feel!"

Khloé had no problem setting the record straight about her sister's "heckling." She responded, "My sister was watching HER man Play against my man… So of course she’s going to heckle the opposing team. Why are you confused?" That makes sense, but wait — did she confirm that Simmons is Jenner's man? Pretty much. Oops.

Even though Jenner herself has remained quiet about her situation with Simmons, most signs indicate that they are in fact a couple. She's supported him at several games, joined by her own family members and his. They've flirted it up on Instagram. And then, there's her older sister, who seemingly confirmed some sort of romance between the two of them on Twitter.

Long story short, Jenner's most recent courtside appearance seems to indicate that the two of them are going strong — no matter what she confirms (or doesn't confirm) to the public.