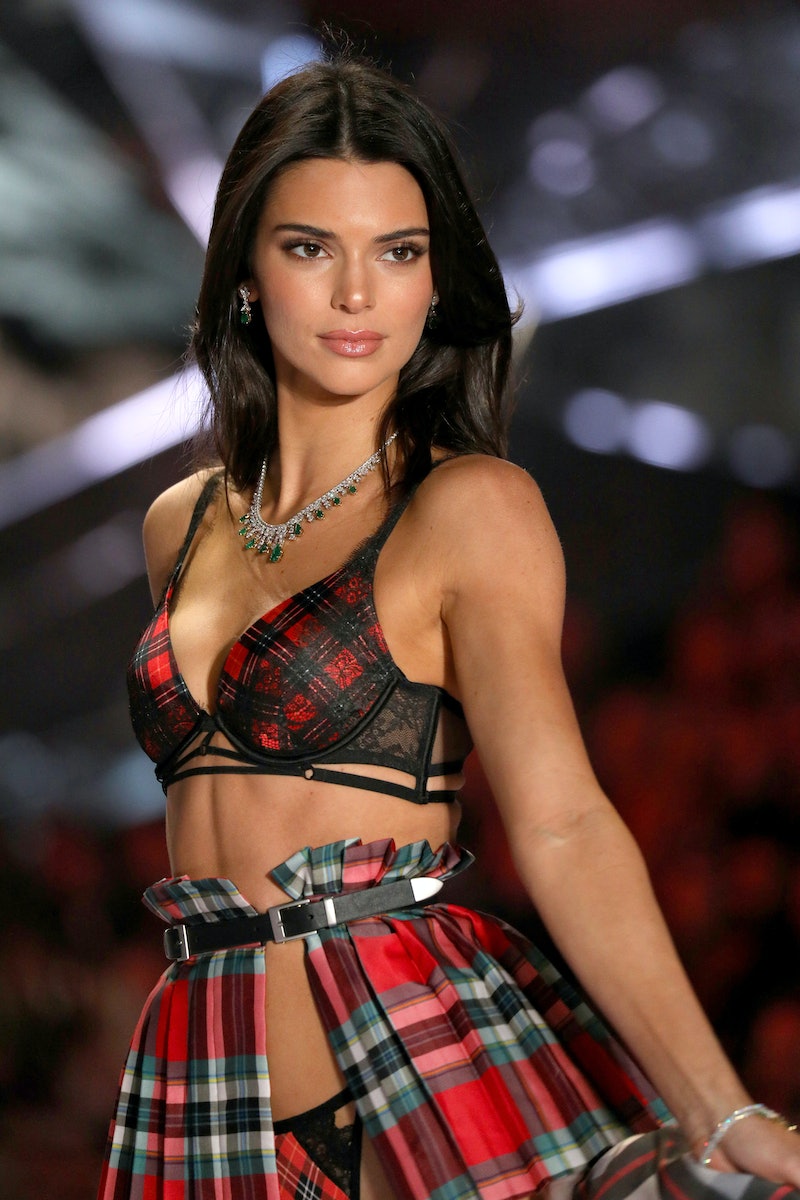 Celebrities: They're just like us. Well, sometimes at least. Not in terms of like, the fame, fortune, and luxurious lifestyles — but as most of us do, they definitely struggle with their self-esteem from time to time. During a new interview with Allure, Kendall Jenner's comments about crying over her acne prove that she's in no way immune to social media critics. Sure, she may have access to some of the finest skin care regimens on the planet. That doesn't mean she never gets pimples, though.

While speaking to Allure for their March 2019 issue, the model opened up about how people have reacted to her looking less than perfect in the past. Jenner mentioned her appearance at the 2018 Golden Globes, in particular, during which time she had an acne flare-up that gained way more attention than it deserved.

"And so I went [to the Golden Globes] and I was super excited about it, and I'm not gonna let something so little (and big) as acne stop me. I was feeling good about myself, and then when people say mean things I'm like, 'I know I have a zit. I know I'm breaking out. You guys don't have to keep pointing it out. I obviously see that, but let me live.'"

After the Globes, Jenner outwardly hit back at critics on Twitter with confidence, but — in retrospect — it seems like it still bothered her on the inside. In response to one supportive fan who commended her for "strutting her acne while looking like a gorgeous star," Jenner replied, "never let that sh*t stop you!" Short, direct, and encouraging. Good for you, girl.

As for how she stops the haters from getting her down on a day-to-day basis, Jenner told Allure that while she's "cried endlessly for days because of things people have said to me," her advice is to just "live your life and not pay attention to it," she said. "I think it can get pretty unhealthy if you really are deep in it and paying attention to it all the time. I think that that's what can really mess you up."

Jenner was recently named the new face of Proactiv, and has admitted on several occasions that she's struggled with acne since she was a teenager. It "killed a lot of self esteem" back then, she said to Allure. Her skin eventually cleared up for a while, but recently returned during the height of her modeling career.

"I get really easily stressed out, but there's obviously a lot of factors to it," she told the publication. "It's a fact that, as women, our bodies change, so that includes hormonally and everything, so for me, I might just be in that cycle. I've had an ongoing battle with it, so it’s a constant thing for me, but I'm in a good place right now, which is awesome."

That *is* awesome, Kendall. Way to be. And as her mom, Kris Jenner, would say, "You're doing amazing, sweetie."