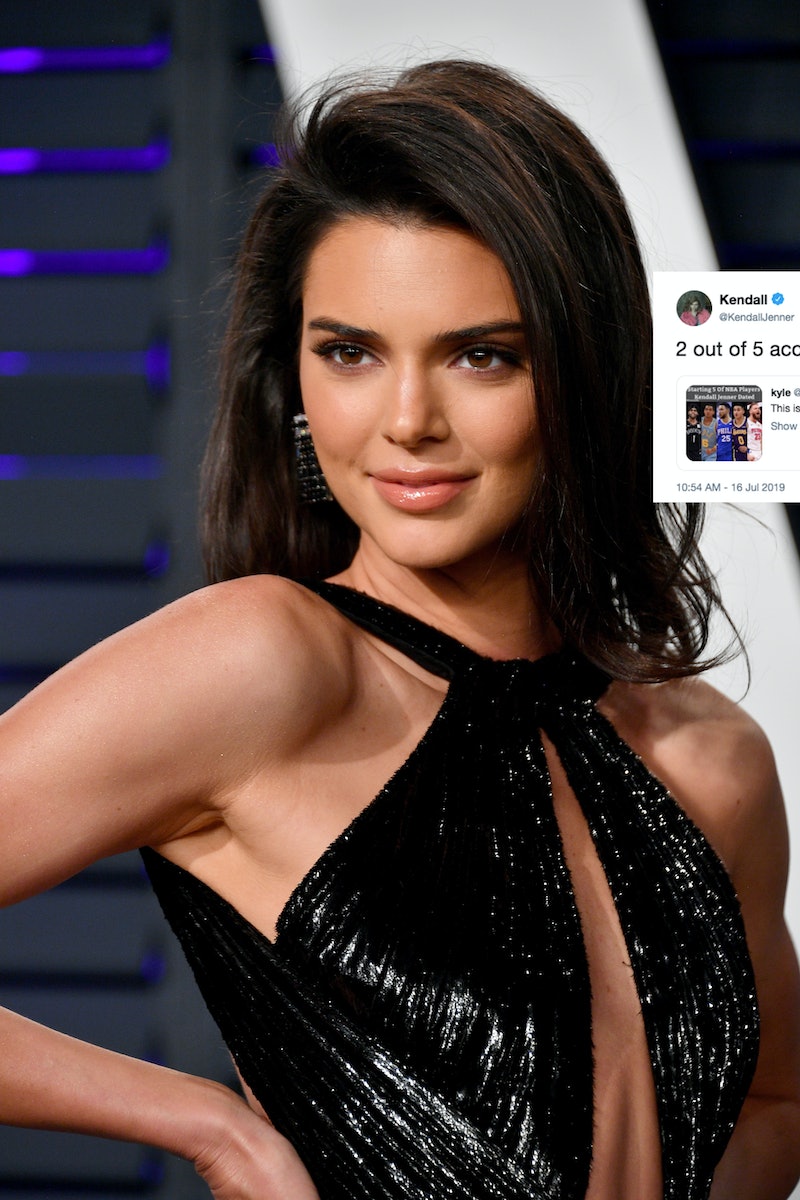 On the social media site, Olivia apparently wrote negative messages that many assumed were directed at the model (she did not name Jenner specifically in her tweets), including one that read, "I just wouldn’t ever wanna be known for dating athletes. Like imagine working your way through a league. Not a team a LEAGUE!"

Well, on July 16, Jenner wrote a tweet that simultaneously serves as clarification for this recent meme and any associated scrutiny. The Keeping Up With the Kardashians star responded to the tweet with a simple statement that served as a perfect way to shut the gossip down. She wrote, "2 out of 5 accurate, thanks."

In regards to Jenner's statement, the reality star was most recently linked to Simmons. According to Entertainment Tonight, the pair recently broke up in May after about a year of on-again, off-again dating. A source told the publication, "Kendall and Ben are not together, but the two are on good terms." The split was also confirmed by People.

The insider continued to explain that the split may have had something to do with their busy schedules, "Both Kendall and Ben are extremely busy, and for now the relationship doesn't work for them. Kendall and Ben have taken breaks in the past and have gotten back together." According to the source, this recent split was what's best for the couple, "They are really good at knowing when the relationship works for them and when it doesn't," the insider continued, "Kendall is looking forward to a busy summer of working, but also spending time with her friends."

Jenner was also reportedly in a relationship with Griffin, according to People. They were first linked back in the summer of 2017. But, by February 2018, People would go on to report that they had "cooled off" as a result of distance, as Griffin was traded from the Los Angeles Clippers to the Dallas Pistons. “They’ve definitely cooled off and are taking things at a slower pace, but not because of any particular drama,” a source said at the time, “He got traded and isn’t local anymore, so they’ve grown apart a bit just because of distance. They’re still involved.”

So, given this background relationship info, and Jenner's own Twitter clarification, it's probably time for the rumor mill regarding the reality star's love life to stop churning.

More like this
30 Of Kendall Jenner’s Best Runway Looks To Date
By Dominique Norman
Rihanna’s Collaborators, Ranked By How Likely They Are To Perform At The Super Bowl
By Jake Viswanath
Twitter Is Having A Meltdown Over Buying Beyoncé Renaissance Tour Tickets
By Jake Viswanath
The Beyhive Is Mad At Harry Styles After Beyoncé’s Album Of The Year Snub
By Jake Viswanath
Get Even More From Bustle — Sign Up For The Newsletter
From hair trends to relationship advice, our daily newsletter has everything you need to sound like a person who’s on TikTok, even if you aren’t.