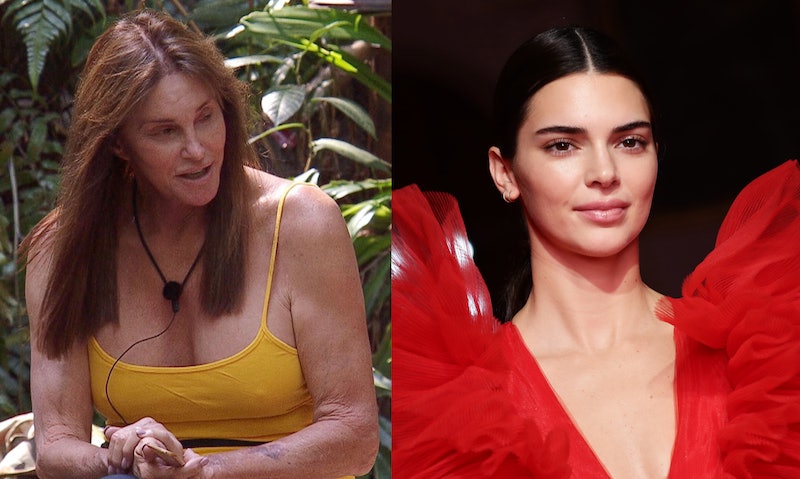 Since Caitlyn Jenner went into the I'm A Celebrity jungle, all eyes have been on her famous progeny and what they have to say about her being on the show. Kim Kardashian West has already been sharing her reactions and now Kendall Jenner has posted support for Caitlyn on Instagram.

Kendall shared a photo of Caitlyn learning the Girls Aloud The Promise routine with campmates Nadine Coyle, Adele Roberts, and Jacqueline Jossa. Alongside the image she said, "always rooting for you! Strongest person in the world." Despite it being late in the year, might in fact be the most iconic reality TV moment of the year. It was truly worth the wait.

Kendall followed the post with, "Just cuz I'm not posting doesn't mean I'm not supporting. I love my dad! Everyone chill." The post comes after many fans wondered why she hadn't said anything about Caitlyn being in the jungle. As a matter of fact, up until this point, the only member of the Kardashian-Jenner brood to post anything was Kim Kardashian West. She tweeted about Caitlyn hilariously waking up the camp with a greeting inspired by her daughter Kylie's wake up call for baby Stormi.

Caitlyn has proven to be a hit in camp, being super up for taking part in activities. From fun (iconic) dance routines, to munching gross things in Bushtucker trials, to getting down and dirty with all of the dishes.

While Caitlyn's other famous daughter Kylie Jenner hasn't posted about her support for her dad, Hello reported that she has been liking posts on Instagram relating to Caitlyn being on the show.

Caitlyn is proving great entertainment value, not only because she's a hoot and a half, but also because she is absolutely giving the people what they want and sharing lots of deets about her children. As well as being open about her experience in transitioning and how she's coped with everything from divorce to changing pronouns. She's also been a massive hit with fellow campmates, even being voted to be the leader of the camp. And considering how we all saw her deal with the Kardashian Jenner clan — there's no better woman to deal with camp drama.