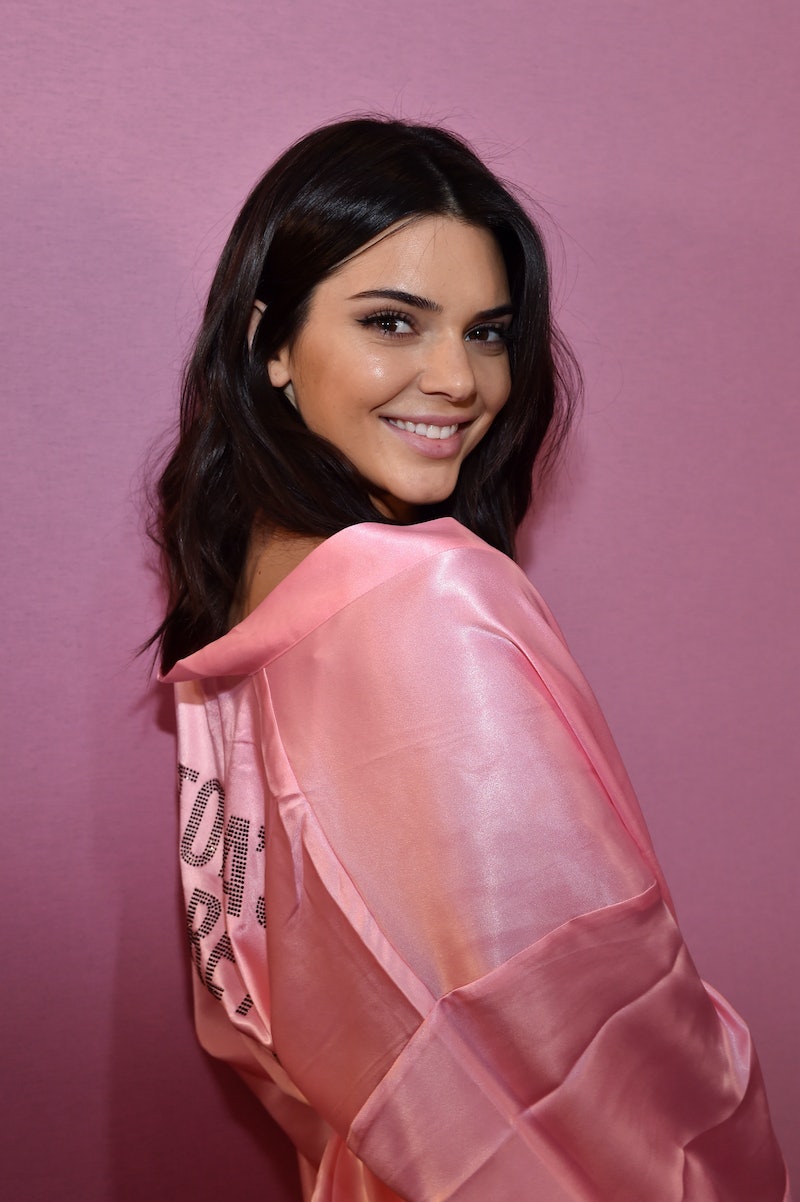 As much as I very often wish I could trade lives with someone (anyone!) in the Kardashian/Jenner household, I have to admit that it seems pretty difficult to be them sometimes. Being under constant criticism like that? I wouldn't be able to take it, and it sounds like one member of the family is getting pretty fed up with it. On Wednesday, Kendall Jenner shut down plastic surgery rumors in a new post on her website and app, and at the same time, she defended herself and her family in a major way. And as much as it shouldn't be necessary, it's awesome to see her stand up for herself.

In the post, Jenner addressed rumors that have been circulating since she deleted her Instagram for a week in November. That combined with letting her sis, Kylie, do her makeup for a Facebook Live chat they had later that month had some fans convinced she took the time off of social media to get lip injections and even facial reconstruction, and now Jenner is speaking out. Her look for that day wasn't the result of going under the knife — it was just makeup done differently, when she normally chooses to go for a more low key look.

We had to hurry, so I let Ky do my face. I never wear lip liner or lipstick unless it's the occasional obvious red—and when I say never, I mean even when I'm doing a nude lip, it's basically just gloss! Anyway, I left all of the makeup on because we were so rushed and I went out and did my thing. I LOVED my makeup. I never say this, but I just felt so pretty.

She went on to say how shocked she was when headlines started appearing claiming that she'd had facial reconstruction, and even added that later, Kylie even used Snapchat to explain what happened to defend her sister. But the damage had already been done, because not only is Jenner only 21, but she's also human — a fact she pointed out that many people often forget about her.

It's crazy because sometimes I feel like people just want me to lose. I found this Instagram page devoted to Kardashian bashing and it has a lot of followers. I don't ever take that stuff personally, but it was upsetting me for me to look at because this person dedicated an entire page to just dissing the whole family and being like, "These people suck." I just felt sad for whoever's behind it—who has the time? People forget that they're talking about real people who have real feelings and actually live their everyday lives (for the most part) just like everyone else.

It's frustrating as a fan to see all the hate the Kardashians get online, so I can't even imagine what it must feel like to be the actual subject of the bashing. Jenner is 100 percent right — she and her family may choose to live their lives in the spotlight, but that doesn't make them any less deserving of basic respect. It's so sad to hear that she received so much backlash over a look and a day where she felt pretty, and hopefully, not letting it slide will prevent it from happening in the future.

So far this year, Jenner has been super into honesty. In another post earlier this week, she spoke out about suffering from anxiety last year, something she's been more and more open about in recent months.

I love that Jenner is opening up more and standing up for herself, even though she shouldn't have to when it comes to things like this. I hope this continues, because when she gets personal, she has really interesting things to say — and maybe by speaking out, she's made some people realize that this kind of behavior is not OK, no matter who it's directed at.