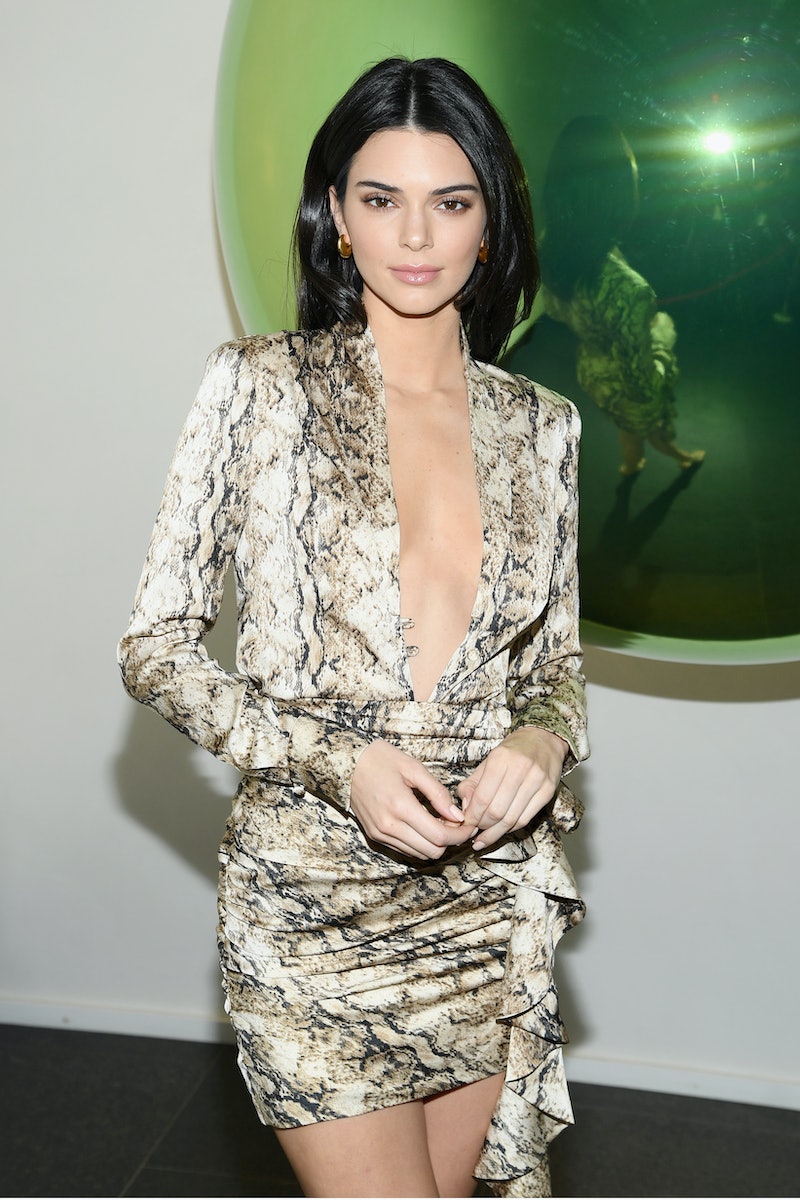 Lately, celebrities have been taking over social media to show off the different ways they can take the cap off of a bottle, and now, this reality star is taking a turn. On Monday, Kendall Jenner shared her bottle cap challenge video, and considering the fact that it was incredibly impressive, there's no surprise that her famous friends (including her sisters) can't stop talking about it.

In case you're out of the loop, the concept of the bottle cap challenge is pretty simple: To unscrew a loosely fastened bottle cap by kicking it. It was started by martial artist Farabi Davletchin, who created the challenge in June and tagged Jean-Claude Van Damme, Jackie Chan, Jason Statham and Conor McGregor, asking them to join in, and since then, it's been an endless chain of celebrities trying out the challenge and sharing the results on Instagram — and daring their friends to do the same. And when Hailey Baldwin tagged Jenner after completing the challenge herself (while riding an ATV, no less), she had no choice but to participate.

Jenner's video is a pretty unique one, though. Instead of simply kicking the top off, she aimed to top Baldwin's attempt, riding a jet ski while successfully managing to kick off the bottle cap — and the video was made even more epic with a little slow motion and a soundtrack of G-Unit's "Rider Pt. 2."

Of course, among the first to cheer her on were her sisters. Kylie Jenner commented a simple "omg" to share her feelings (same) and Kim, Kourtney, Khloé, Kris, and Scott Disick all chimed in as well, sharing how impressed they were with her. Talk about support!

It looked like Baldwin was pretty proud of her, too. If there was any way to top her ATV, it was Jenner's jet ski, so she totally deserves the props.

And in case you were worried about that extra plastic in the ocean, don't be — according to Jenner herself, someone went back to get the cap and was able to find it, so not only was this a really cool edition of the bottle cap challenge, but an environmentally sound one as well.

Jenner isn't the first celebrity to take the challenge. Lizzo hilariously made an attempt earlier this week, although at first she missed and on the second try, water went everywhere. Um, maybe only try this with an empty bottle for the cleanest results?

Another memorable attempt at the challenge was made by Mariah Carey, making the screw top to a bottle of wine go flying off after she simply sung a high note. No word on whether she had a little camera magic involved to make that happen, but it's still pretty awesome.

Sadly, Jenner didn't tag anyone in her post, but hopefully, the rest of her family will decide to join in. With how much time she spends in the gym, Khloé definitely seems like she'd be able to make the kick happen. Now, she just has to try.

More like this
30 Of Kendall Jenner’s Best Runway Looks To Date
By Dominique Norman
Kendall Jenner Just Wore 2000s-Era UGG Classic Ultra Mini Boots
By Dominique Norman
I Tried Kendall Jenner's No-Pants Look As A Plus-Size Woman
By Sarah Chiwaya
RHOP’s Robyn Dixon Explained Why Juan Paid For Another Woman's Hotel Room
By Brad Witter
Get Even More From Bustle — Sign Up For The Newsletter
From hair trends to relationship advice, our daily newsletter has everything you need to sound like a person who’s on TikTok, even if you aren’t.