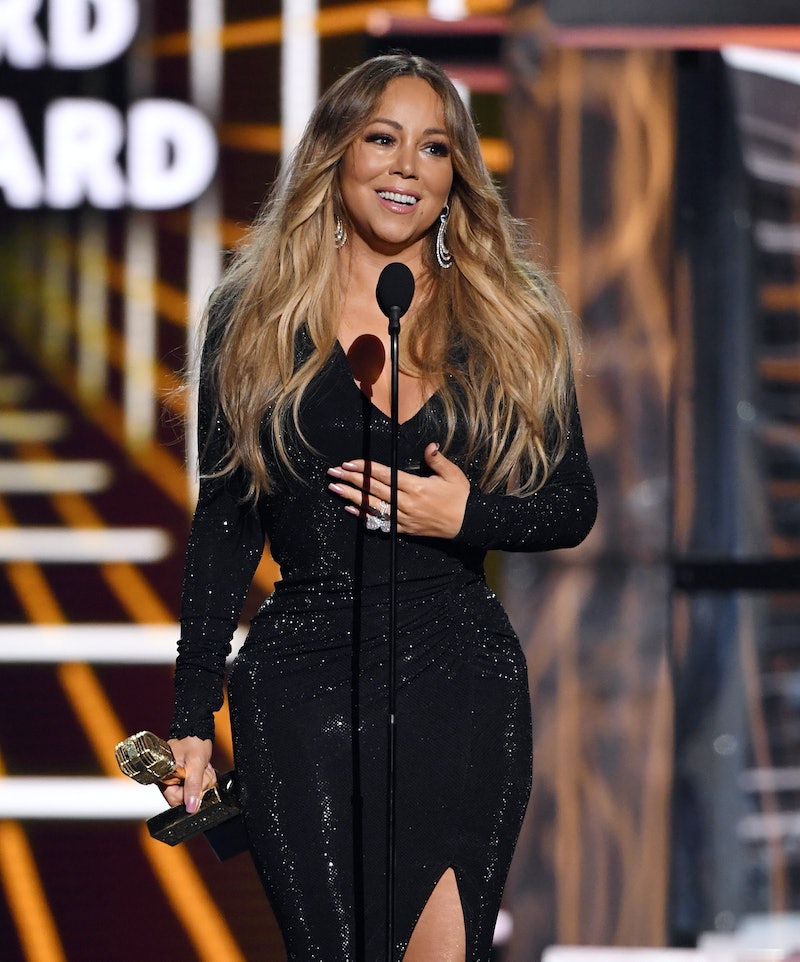 This singer just put a new twist on the Internet's latest obsession. On Sunday, Mariah Carey accepted the Bottle Top Challenge, and her video might be one of the best yet. The challenge is pretty straightforward, requiring participants to get the top off of a bottle without using their hands, as per Yahoo News. So far, people have kicked the bottle over, had their pets take the cap off, and used the wheel of a mountain bike to accomplish the goal, among other things. Of course, Carey brought new life to the viral challenge, and may have had the most unique approach to removing the cap.

In her video, Carey positions herself as if to kick the bottle, then sings a high note. The cap pops off the bottle and flies out of the camera frame. Carey posted the video on Twitter and Instagram, captioning it, "Challenge accepted! #bottletopchallenge." It's unclear how the singer managed to maneuver the bottle cap off the top of her sparkling water. The video might be just can elaborate prank, but physics aside, fans know that there's almost nothing the "We Belong Together" singer's powerful voice can't achieve.

Fans and friends couldn't get enough of Carey's funny take on the meme. On Instagram, many people commented to show their support. Carey's ex-husband Nick Cannon wrote, "Hilarious!!!!", and Busta Rhymes replied with the crying laughing emoji. Actor Ruby Rose chimed in to declare the singer a winner, writing, "This is what they call a win." The singer JoJo praised the star's shiny outfit, writing, "You. Look. SOOOOOOO BOMB!!!!!!!!!!!!!!!!", and Katherine Langford commented simply "Omg."

Many other musicians agreed the singer won the challenge as well. Rita Ora commented, "You win hands down", while Dinah Jane added "the best one hands down."

UFC Featherweight champion Max Holloway was among the first notable people to try the challenge, which originated with Taekwondo fighter Farabi Davletchin, as per the BBC. Actor Jason Statham was next to give the challenge a go, and the trick soon caught hold online. John Mayer, martial artist Conor McGregor, and singer Swae Lee also joined in.

Carey isn't the only celebrity who gave the challenge a try online in the past week. On Tuesday, Ellie Goulding posted a video of her Bottle Top Challenge on Twitter, captioning it, "Suck It." Meanwhile, Diplo posted a video of the challenge on Instagram, writing that Mayer put him up to the task. And Ryan Reynolds posted his hilarious Bottle Cap Challenge on YouTube, writing, "Sort of..." in the description. The actor didn't quite manage to get the top off, instead kicking the glass bottle off of a table. These stars all took a more traditional tactic when it came to the challenge, choosing to go for a classic kick.

The #BottleTopChallenge might be the latest viral challenge celebrities are trying out, but Carey's submission undeniably took it to the next level. On social media, fans and friends are declaring the singer a winner, and given that powerful high note, it's tough to argue.

More like this
The Meaning Of Steve Lacy’s “Bad Habit” Lyrics
By Radhika Menon
9 Photos Of Celebrity Couples & Unexpected Duos At The 2023 Grammys
By Jake Viswanath
The History Of Taylor Swift's "All Too Well" & What The Lyrics Actually Mean
By Jake Viswanath
Olivia Rodrigo Manifested Finally Meeting Demi Lovato
By Jake Viswanath
Get Even More From Bustle — Sign Up For The Newsletter
From hair trends to relationship advice, our daily newsletter has everything you need to sound like a person who’s on TikTok, even if you aren’t.