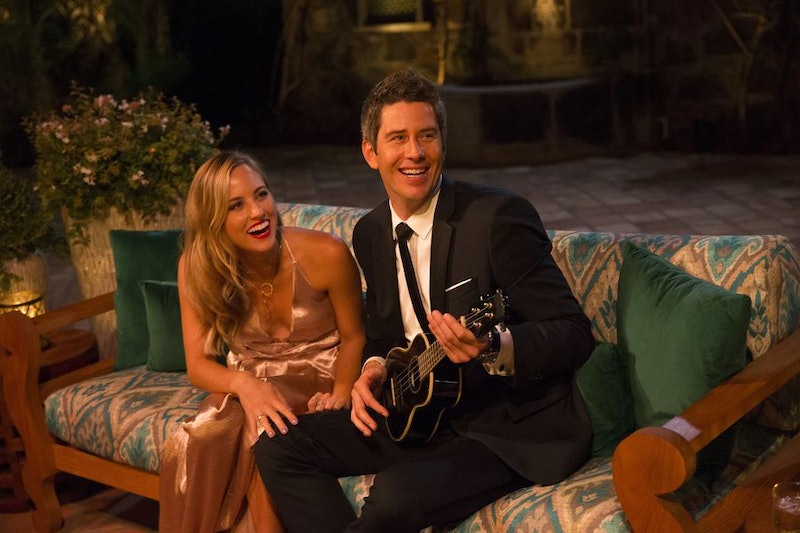 In every season of The Bachelor, there comes the time for the dreaded two-on-one date. On Monday night's episode, Kendall and Krystal ended up on a date with Arie, and by the end of the night, only one of them got to stay. But even in the few moments where they were left alone together, Kendall refused to engage in Krystal's drama, and it was a pretty incredible moment to see.

So far this season, Krystal has been pegged as the villain, mostly by ensuring that she has the most time possible with Arie even at the expense of the other women and their feelings. Since their first one-on-one date (where Krystal got to visit Arie's hometown of Scottsdale and meet his family), she's been under the illusion that she and Arie have a relationship that's far and away ahead of whatever he has with the other women.

After Krystal talked to Arie and completely tried to drag Kendall under the bus for allegedly never having been in love before, she and Kendall ended up face to face while they waited for Arie's decision. And even though Krystal kept baiting her with an argument, Kendall refused to feed into it. Instead, she flipped the "catty women fighting over a man" script and was kind to Krystal, acknowledging that the situation must have been tough for her.

"I can definitely empathize with you. I feel like you have so much beauty in you. I one hundred percent see that. You've been through a lot. You've been through so much. You've been through a lot of pain, like, more pain than I can even understand, and it feels very controlled. I don't think you should try to control it, I think you should just — man, I feel like the most beautiful moments I've ever had with somebody, and the most I've been able to connect with somebody is when I've completely felt like I acted like a fool or acted like somebody that wasn't perfect. Man, you're imperfect, and isn't that like, amazing?"

And, now that the episode aired, Kendall chose to share the above photo on Twitter, reinforcing that she believes that kindness is the way to go, even after what happened with Krystal.

It was pretty impressive to see her hold her composure, even when Krystal kept trying to push her buttons. No matter how many times Krystal kept acting like everything Kendall was saying was stupid, Kendall didn't let Krystal know if it bothered her. Instead, she kept trying to communicate with her in a very levelheaded, positive way. She tried to see where Krystal was coming from, even though all that Krystal was trying to do was make her feel smaller. And although Krystal tried her best to make Kendall look bad when she spoke to Arie, Kendall didn't bring any of that up when she had the chance to talk to him instead, and chose to focus on their relationship only once again.

This isn't something we get to see on The Bachelor very often, especially when it comes to two-on-one dates. In the past, we've seen them play out in a vicious way — like the one between Ashley Iaconetti and Kelsey Poe on Chris Soules' season, for example — but that wasn't the case this time. Even though it very easily could have gone down that path, it's only because of Kendall that it didn't.

And, as this tweet pointed out, in a way Kendall won that date, even if Arie hadn't ended up giving her the rose, because of how she'd managed to rise above it all.

It's easy to see how much maturity and emotional intelligence Kendall has, because it couldn't have been easy for her to face Krystal that way and maintain her composure. But there definitely wasn't anything for her to gain with Arie by engaging with Krystal, and it's a very good thing she didn't stoop to Krystal's level in that moment.

Even if Krystal hadn't ended up being such a villain this season it's still very satisfying to see that Kendall got the rose and that she got to stay, while Krystal was left alone in the restaurant, soaking up her own bad decisions. Knowing the kindness and maturity that Kendall is capable of, it'll be fun to see what happens with her and Arie from here.