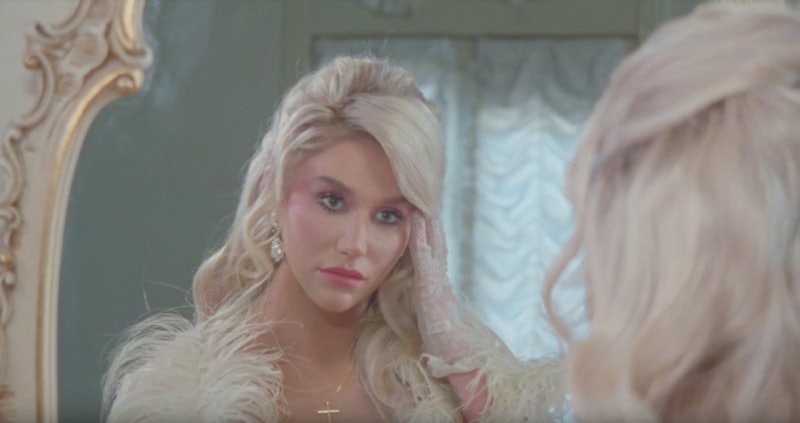 Praise be to Kesha who is back and wreaking a little havoc in her Sunday best. Kesha's new video "Raising Hell" has her playing a televangelist with some very big hair and an even bigger secret. Sure, Kesha's a holy hot mess in this new clip, but you have to bow down to a woman who isn't afraid to admit it.

This video for her new single featuring Big Freedia casts Kesha as a Tammy Faye Bakker-like figure. She's out their shilling bibles and godly perfection in her hot pink pantsuit and blood red lipstick, despite struggling to keep herself together. While Kesha is seen helping others get saved in the clip, she's having trouble finding her own salvation. Well, that is, until she goes and accidentally kills her abusive husband.

It's hard not to see the symbolism in Kesha taking out an abuser and starting a new life on her own. Since 2014, Kesha's been in a contentious legal battle against her former producer Dr. Luke (real name: Lukasz Gottwald), who she accused of allegedly "abusing her physically, sexually, verbally and emotionally over a 10-year period," per Billboard. (Dr. Luke has denied the allegations.) But here, Kesha is moving on — literally — and driving off to start a new life.

In the video, she gets caught by the cops, but this doesn't mark some tragic ending. As Kesha's thrown in the back of a cop car, her mascara running down her face, she blows a kiss to the camera that makes it clear, this is just a minor hiccup. "Hallelujah," she sings to kick off the track. "I'm still here, still bringing it to you." This is not an ending, but a new beginning.

With her new single, Kesha makes it clear there will be mistakes along the way, but they are hers to make and she isn't afraid to make them. She finally feels free, and as she sings, "Mama raised me well, but I don't want to go to heaven without raising hell."

Days before dropping her new single, Kesha said that her new album, High Road, will be a return to "pure and debaucherous joy." "Kesha got her balls back, and they’re bigger than ever," she assured fans in a teaser for the album, out in January 2020. Kesha's in a different headspace now than she was when making 2017's Rainbow, telling Billboard back in September that while writing High Road she "dug through the emotional wreckage, and now I can go back to talking a little bit of sh*t." She's also hoping this album will let her "put a solid footprint back into pop music, like, ‘I can do this, and I can do this on my own.’"

With this song, which Kesha told Radio.com was inspired by a tattoo session with Big Freedia, she wanted to send an inspiring message to all those other "misfits of creation." “Good people sometimes enjoy doing bad things,” Kesha said. “It doesn’t take away from you being a fantastic soul. It’s just kind of fun to be naughty.”

Kesha's "Raising Hell" is a gift from the heavens that lets everyone know she's back making music on her own terms and having more fun then she has in years.