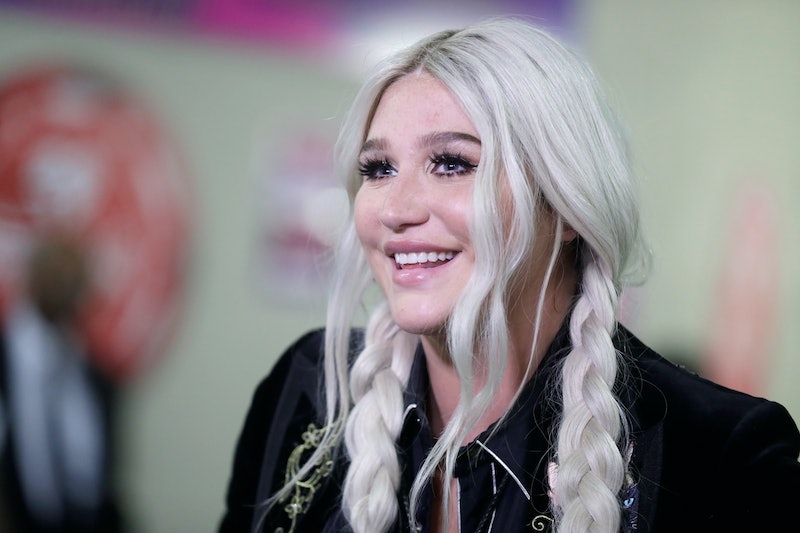 Kesha might not be brushing her teeth with a bottle of Jack anymore, but she's ready to have some fun. It's been over two years since Kesha put out her last album, and a lot has changed for the star in the interim. Most notably, she's ready to leave the past behind her and enter into a world of fun. In fact, Kesha teased her new album as a return to "pure and debaucherous joy," in a teaser video shared on Monday, Oct. 21.

The High Road sneak peek — which, according to the video, was shot in "KESHAVISION" — has the vibe of a freewheeling, glitter-filled road trip, and harkens back to the star's "Tik Tok" days. This time, though, she assured fans, "Kesha got her balls back, and they’re bigger than ever."

Kesha's trailer for High Road is interspersed with vintage-style vacation shots, snippets from a few of her new songs, and brief interview clips where she discusses her inspiration behind her latest project. "I’ve like, seen the light," the raven-haired star explained. "Life is like driving across the country in a pretty small Astrovan, with your whole family in it, for 90 years. Because I think life is a vacation from where we go when we die."

The singer then went on to admit that she was "in a very different headspace" while writing 2017's Rainbow, as she was in the midst of "[addressing] some very serious things" at the time. While Kesha didn't explicitly reveal what those "very serious things" were in the teaser, she did open up to Billboard earlier this year about how her lengthy legal battle with her longtime music producer Dr. Luke (real name: Lukasz Gottwald), which inspired many songs on her Rainbow record, has effected her creative outlook.

"I dug through the emotional wreckage, and now I can go back to talking a little bit of sh*t," she told Billboard of writing High Road. "I really am so happy," the star continued, "and that’s why I want to make happy songs — and as a distraction from the bullsh*t that’s going on ... I want to inspire joy."

Back in Oct. 2014, Kesha filed a civil suit against Gottwald in which she accused him of allegedly "abusing her physically, sexually, verbally and emotionally over a 10-year period," as per Billboard. Gottwald, for his part, has consistently denied these allegations (both on Twitter and through his lawyer), and the abuse suit was dismissed by a judge in New York in April 2016. The producer then went on to sue Kesha for more than $50 million for alleged defamation and breach of contract, but that has yet to go to trial.

Kesha hasn't announced a release date for High Road yet, but it sounds like fans can expect the same kind of pop-fueled, high-octane, fun-filled energy in her songs that helped make her famous to begin with. "I feel like this time around I reconnected to the unrestrained joy and wildness that’s always been a part of me," she told Rolling Stone in a statement on Oct. 21. "I won’t be defined by my past, but I will learn from it. I am so happy, and I hope that happiness is infectious."