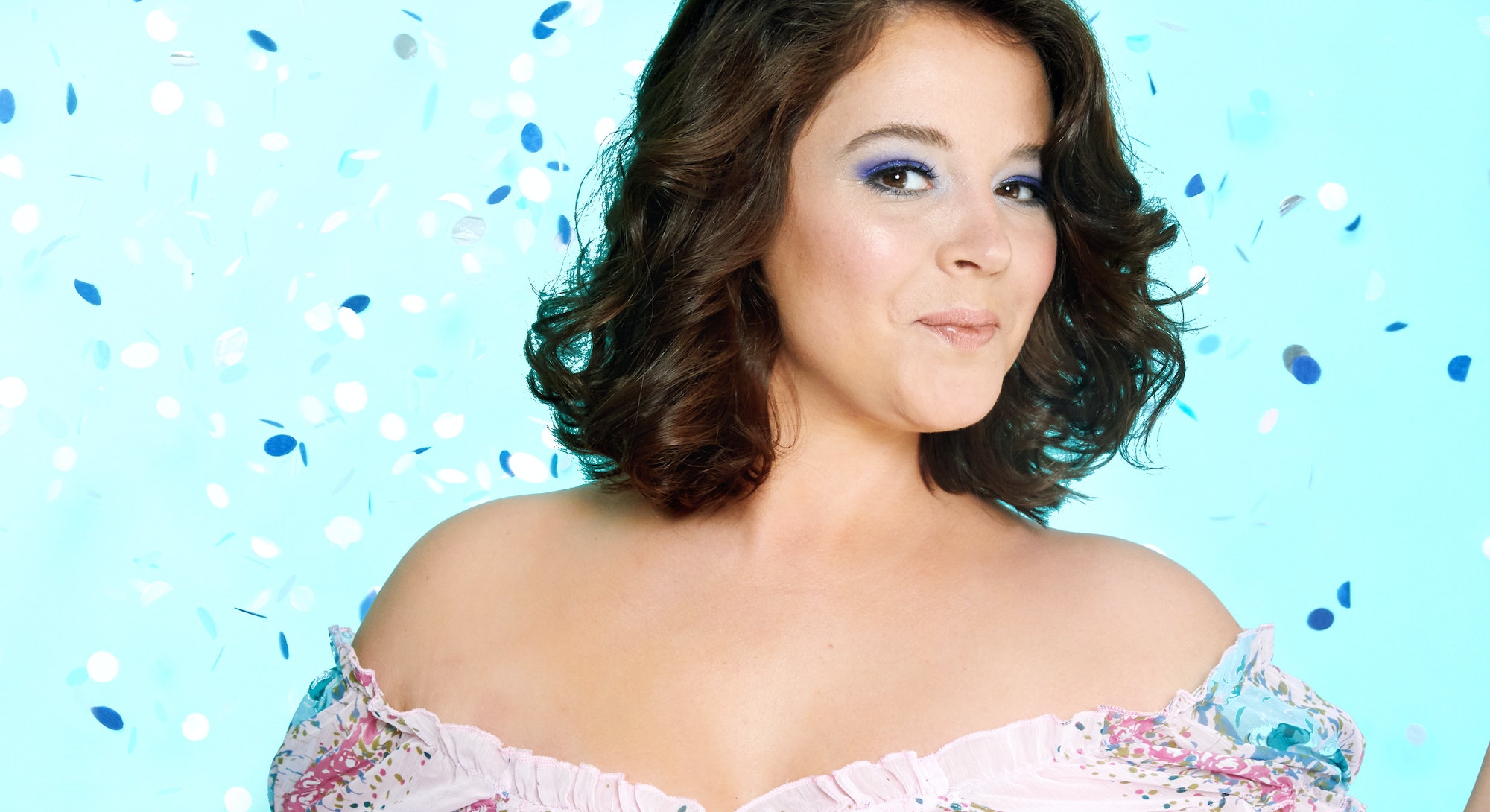 Whether they admit it or not, everybody in Hollywood wants to be a star — play the lead role, sing the big solo, stand front and center in a photoshoot. Ask anyone in the industry, and they'll tell you so (and if they don't, they're lying). But You're the Worst star Kether Donohue is achieving this goal backwards — by recognizing the power and the freedom of playing the oft-dreaded sidekick role.

In just three short seasons, as Lindsay on You're the Worst, Donohue has completely taken down the stereotypical rom-com best friend role with every step, just like her costar Aya Cash destroyed the idea of rom-com protagonist. While Lindsay does things like convince her husband to watch her sleep with other men, stab her husband in the back (literally), and accidentally stumble into a career as a pop star, she is also the character who opened the frank discussion about choice by getting an abortion with no fanfare or hand-wringing in Season 3. Donohue has made Lindsay more three-dimensional than so many stereotypical rom-com heroines could ever hope to be, in part because she's not trying to be the heroine. The actor actually wants to be the weird, offbeat bestie. In fact, she's made it her speciality.

I feel happy that I've never really had to worry about my weight or looks very much. I let the comedy speak for itself.

"In high school I was always cast as the sidekick role. I was always the evil stepsister or something," she says as she curls up on the soft velvet couch next to me on a warm day in Los Angeles. "I'll never forget, I was on a cruise ship with my family when I was, like, eight years old and they were doing a play with the kids on the cruise ship. I had auditioned for the lead girl, and then the director of the play was like, 'Um, we're going to cast you in the sidekick birdie character.'"

She laughs as she remembers how she was forced to dress up as "this weird bird" instead of whatever glamorous costume the lead got to wear. She says she remembers thinking, "OK, this is where I belong. I'm a sidekick." What could have been a disappointing experience for another kid actually gave Donohue love and respect for the best friend role, one that the actor says offers her more freedom to focus on her comedy.

"I like how I never had to really care about my appearance very much," she says, picking pieces of metallic confetti left over from her earlier photoshoot off of her legs. "There are no boundaries. I like playing roles where vanity is out the window. It's nice to not have a pressure to feel like you have to be sexually attractive when you're playing a role."

It's clear from her attitude during her photoshoot that ended just minutes earlier that she means it. As she moved through different poses, people on set stepped in to pull up her dress here or cover that bit of skin there, but Donohue just shrugged her shoulders and laughed each time as if to say, "Oh well, who cares?" She was game to do whatever it took to get the most entertaining photos possible.

"I let the comedy speak for itself. There's really no room for vanity when you're acting," she says.

And that's perfect, considering that on You're The Worst, Donohue has had to play all kinds of wild extremes as the Cash's character's best friend. Sure, there have been some lows, like that time she stole her ex-husband Paul's (Allan McLeod) sperm and artificially inseminated herself with a turkey baster, all in attempt to win him back. Then there was the part where she cheated on him every chance she got when they were together, and even made him watch her "cuckold" him in some bonkers emotional manipulation scheme that I still can't believe worked. And, let's not forget that she straight-up stabbed the guy in the back and still managed to stay with him for a while after that.

...playing a best friend can sometimes feel minimizing, so it's nice to feel like you're playing a character that women can connect to and feel inspired by.

But there have also been some truly applause-worthy moments in the course of all this drama, like when she became a semi-famous singer, or when she finally earned independence and learned how to take care of her own home without a man around, or when she nonchalantly got an abortion because she felt confident that the most responsible thing she could do for that unborn baby was to not bring it into the world. At times, it's true that Lindsay is downright deplorable, but she doesn't have to be likeable, because it's her imperfection (to put it lightly), complexity, and zaniness that make her such a watchable character.

But for all that insanity, what really comes through Donohue's performance is that Lindsay is still very much a real person. After all, even the most unhinged human is still, well, a human.

"It's nice to walk out of work and feel that there's an integrity involved," Donohue says, referring to her character's treatment on You're The Worst.

And fans have taken notice of that integrity. In fact, Donohue says a pregnant woman once stopped her in the middle of a line for a restaurant bathroom because she just had to thank her. Apparently, Donohue's sex positive portrayal of the once-pregnant Lindsay helped this woman to feel less ashamed of her heightened sex drive during her pregnancy — an urge that is not only common, but also often brings about serious doubt and worry for expectant mothers.

"Lindsay is inspirational in a lot of ways to women because there's an embracing of complexities — she can be grotesque and sexy, she can be funny and tragic," Donohue says, pausing to take a sip of her coffee. "And playing a best friend can sometimes feel minimizing, so it's nice to feel like you're playing a character that women can connect to and feel inspired by."

Add to that the fact that Donohue says that she has never been asked about her weight or had her looks inspected by the team at You're the Worst or FX. So not only is Donohue giving voice to women and "best friends" everywhere, she's also doing it while being totally, and completely, herself in every way, without being forced into a box by Hollywood. "I mean, it's sad to say that that's a thing, but it [happens]," she says with a slight shrug. "According to some industry standards, some people consider me heavy. It's nice that Lindsay isn't seen on the show in that way."

So yes, while Lindsay's actions sometimes border on insanity like so many rom-com sidekicks before her, Donohue brings Lindsay depth, somehow keeping her grounded and relatable (even when she's microwaving semen for her DIY artificial insemination).

"I heard a reporter say once in an interview and it has stuck with me that Lindsay lives from the id. It's so true," she says, referring to the part of the psyche that seeks immediate gratification. "It's one of those things where your greatest strength is also your greatest weakness. Sometimes living from the id is to Lindsay's detriment, but it also makes her lovable and fun and in the moment in life. She has so much power inside of her that with a little bit of focus, she could do some amazing things."

And the scene where Lindsay stabs her husband might actually be one of those amazing things, because according to Donohue, much like her character, there's so much more to that "campy" scene. "Sure, objectively speaking, of course it is not correct to stab your husband. But when you're watching at home, I do think a lot of women connect to Lindsay's, what is typically considered 'masculine,' aggressive quality," she says. "It's fun to watch that because we all have these different aspects inside of us as women that don't necessarily connect to what the status quo of what [femininity] is supposed to be."

Considered to be one of the most shocking scenes of the series, the stabbing scene also showcases what You're the Worst does best: subvert classic stereotypes and gender norms. In that game changing scene, Paul was trying to make his partner stay home and cook a meal while Lindsay felt suffocated in their stereotypical patriarchal relationship and retaliated on impulse.

"I kind of related that whole scene in general to a larger metaphor of hating the patriarchy," Donohue says. "It was symbolic of a larger thing and it was nice to see a female character do something like that, because women don't get to be violent very often in roles."

And since Lindsay constantly pushes the status quo, she was the perfect character to show an authentic portrayal of what getting an abortion is really like for a woman. When it happened in episode 10 of last season, there was no preaching from other characters about whether or not she was sure about making the right choice (even an anti-abortion picketer, after hearing Lindsay's story, approved of her decision to terminate her pregnancy).

"The way we did it, it was like, 'OK, we do this all the time, 'abo-bo' and then Marie Callender's after,'" Donohue says. "[The abortion] was not a big deal, which is great because that's how it should be ... We should have that choice and it shouldn't be anyone's business other than your own."

Even though Lindsay's pregnancy started with a microwave and a turkey baster, the end result was an incredibly real and responsible piece of storytelling. And for Donohue, that comedic start was the best possible introduction to that arc.

...we all have these different aspects inside of us as women that don't necessarily connect to what the status quo of what [femininity] is supposed to be.

"All of these heavier life moments are told best through comedy because it kind of sneaks up on you as the audience," she says. "It makes you feel [less] alone. And as long as it's handled with care and compassion and in a delicate, eloquent way without losing its edge, it's the right way to do it."

But before our conversation ends, Donohue cracks me up one last time — apparently researching for her role of Lindsay leads to some ... ahem, questionable Google search histories. "I was dating someone at the time, so if it ever came up where you're looking on someone's phone, my god, they would think I'm a psycho. I had like, 'How to artificially inseminate yourself with a turkey baster,'" she says with a laugh. "I had to delete the search history on my phone."

And if anyone can turn awkward, heavy, serious moments like that into something we can all laugh at, it's Donohue. After all, that's why her "sidekick" was never destined to stay on the sidelines of anything.