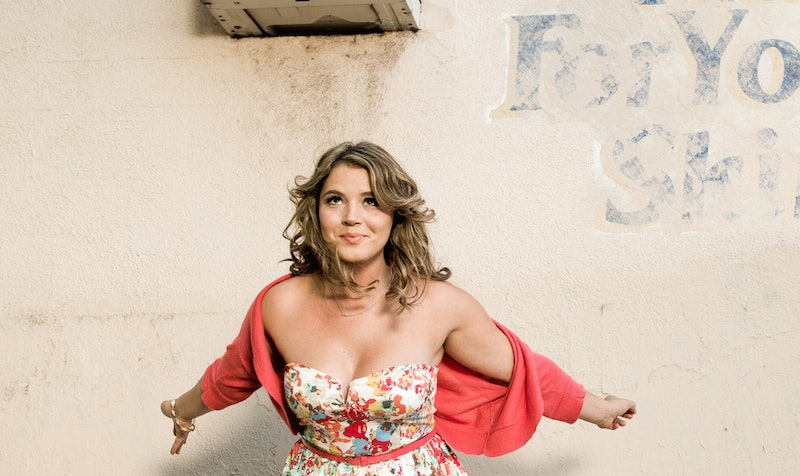 You may not have heard of FXX's fantastic sitcom You're The Worst . Or maybe you have, but in that my-friend-who-watches-really-good-TV-that-I-promise-I'll-watch-someday sort of way. But look: You should really get on that. Not only is this show freaking hilarious, it's doing some pretty daring things for women in sitcoms. I'm talking big shakeups. Huge. In fact, it's exactly what drew actress Kether Donohue, who plays best pal to the lead and the bananas-in-a-great way Lindsay Jillian on the show, to Stephen Falk's incredible little show.

"What I really like is, I get to play a character who — you know, I’m curvier than the average actress who you might see on TV — but I’m still, Lindsay’s still written as a sexy character and she can eat and be kind of grotesque," she tells Bustle. Donahue is referring to many of Lindsay's scenes, but this trait really comes center stage in Wednesday's new episode "Crevasses" in which Lindsay uses Edgar to help her pick up dudes a wings n' beer joint... even though Edgar is really hoping he's the dude she picks up. Throughout the night, Lindsay orders round after round of wings, and by the time her storyline takes a turn, she's got wing sauce all over her face. But she's not just covering in wing sauce as part of some look-at-the-girl-who-dared-to-eat-wings-on-TV way. There's more to it.

"[ You're The Worst ] pokes fun at the fat best friend with the fat Lindsay, but also Lindsay also gets to be sexy and funny and grotesque. It’s very rare that you see a woman eating the way Lindsay does on the show," she says. And it's true. Lindsay is simultaneously a sex kitten, the girl next door that the male lead's best friend Edgar goes gaga over, the best friend, and a character who's got one of the most interesting and contentious storylines on the show. She's technically sitting in the "best friend" role next to Gretchen, but she's not about to fill those shoes the way a typical rom-com would have her do it.

"What’s great about this show is that there’s really no label on the female character," she says.

But what's more is that You're The Worst doesn't exactly wheel Gretchen and Lindsay in and beg for us to worship them, for they are woman, hear them roar. These two are incredible characters, but they aren't exactly the sitcom definition of "likeable" and they don't do things that women normally do in sitcoms or rom-coms.

"For Gretchen, you see her sh*tting her pants in one episode last season. What’s great is that you get to see women on television doing things that males would do in male driven comedies," she says. "You know, in these male driven comedies, we get to see men doing this kind of physical slapstick comedy all the time, and in this comedy it’s really nice to see women getting do these kind of outrageous, grotesque things and still be likable and sexy at the same time."

Of course, the real lynchpin in the You're The Worst formula is that Gretchen doesn't get to wake up hungover in her office and Lindsay doesn't get to have breakup sex with her ex without the requisite realistic consequence: Shame. Still, You're The Worst doesn't shame its characters, but it does tap into the innate reaction we all have when we do something we regret. It doesn't shy away from it, and it doesn't brush it under the rug for the sake of an uplifting joke. This series hits that inevitable feeling head on.

"When you watch a character go through something so embarrassing and so vulnerable, and something is portrayed in that way is really fresh and liberating and be able to go like oh that person f*cked up too, I’m not the only person who’s a total f*ck-up," Donohue says. "I think [the show] does a good job of honing in on that feeling of shame and insecurity but also being comedic about it."

And as it turns out, it's that element that fans seems to be latching onto the most. Donohue says she met a fan who thanked her for the character of Lindsay. "She confided in me. She was like 'I’m married and I’m pregnant and I have to say, watching lindsay is so cathartic for me, because I have an inner slut" — to be clear, this is Lindsay's name for herself when she discovers her hidden sex drive — "and an inner party girl and sometimes I don’t know what to do since I’m married and pregnant and it’s so nice to see a character on television be so conflicted because that’s kind of how I feel.'"

So all of you folks who've got You're The Worst lined up in your DVR queue, dodging your TV aficionado friend's texts about the fact that you still haven't started watching yet, maybe just get on that. Because there is such a thing as a kickass romantic comedy, and it has Kether Donohue in a football jersey with wing sauce all over her face. You're welcome.