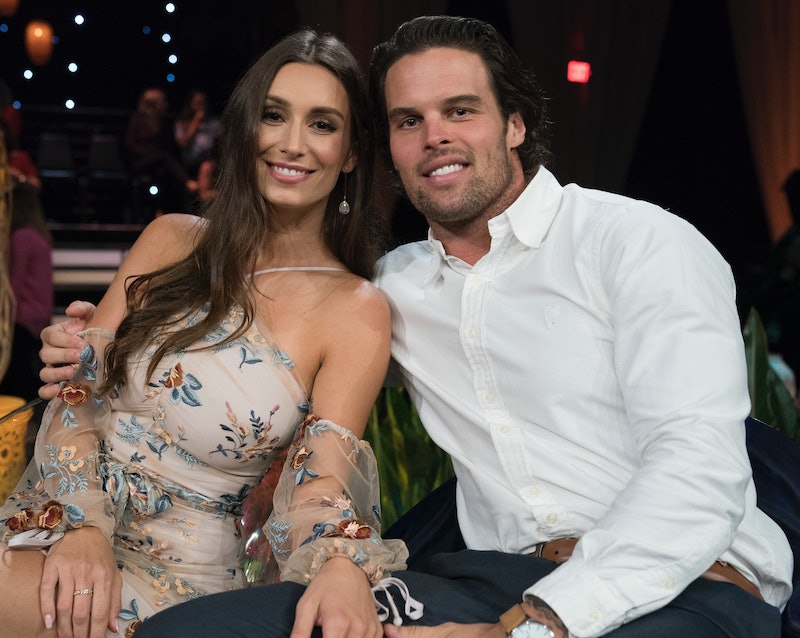 While it's often surreal for audiences to watch contestants from different ABC reality shows interacting on Bachelor in Paradise, it's even more bizarre to see reality stars reunite for a televised wedding. This time, Chris and Krystal are getting married on BiP, and the promo for tonight's episode teases that big names like Becca Kufrin, Ben Higgins and girlfriend Jessica Clarke, Kendall Long and Joe Amabile, and Astrid Loch and Kevin Wendt will be in attendance, among others. So for those who need a quick refresher, here's what lovebirds Kevin and Astrid are up to in 2019.

As a quick refresher, Astrid vied for Nick Viall's affection on The Bachelor Season 21, while Kevin was on The Bachelorette Canada before they both appeared on Bachelor in Paradise Season 5. While the couple initially hit it off, they broke up before the end of the season, later rekindling their romance after the cameras stopped rolling. "As bad as the breakup was, it might have actually made our relationship even better," Kevin told People last September. "I feel a lot less pressure and I'm excited about our future together. Everything seems lighter."

As a result, Astrid moved from Florida to Canada in December of last year. Here's what they've been up to ever since.

They're Talking About Their Future

"He has until I turn 30 to propose because I want to make it in my 20s," Astrid told E! News earlier this month. "We'd probably get married in the United States," Kevin said in the same interview. "Probably somewhere in Florida, closer to her family and then all of my friends and family could make a three or four-day trip to Florida."

They've Been Loving The Warm Weather

Since both Kevin and Astrid are both so active, it comes as no surprise that they've been spending a lot of time in the great outdoors. They've been doing some sailing, biking to get ice cream, and grilling out.

They Spotted A Bunch Of Monkeys

The couple went all the way to Southeast Asia to participate in a fitness retreat called Active Escapes, where they ran into former Bachelorette (and current Bachelor in Paradise) contestant Blake Horstmann.

Like any good Canadian boyfriend, Kevin taught Astrid how to ski this past winter, shouting reassurances to her as she went. "Good 'ol pizza, french fries!" he encouraged her in the above video, referring to the shapes beginners are told to make with their skis. As Astrid joked on Instagram, "I only cried once, and I can't feel my calves." Sounds about right.

They Celebrated Their Anniversary

And although they're still trying to figure out when exactly their anniversary is, due to their time apart, it's notable that they've been together for a whole year. "I'm 35, and I don't think I've ever had a girl where I feel this excited to come home to," Kevin told E! News in the same interview. "I feel like she makes our house a home and I feel like I already see her 20 years from now and me being more in love with her then than I am now."

Kevin's Been Showing Her Canada

In addition to going to her first Toronto Maple Leafs game, Kevin has also taken her to see the Raptors.

"I feel like...we're pretty normal compared to a lot of people that go on the show…I feel like we're on our own little island from the Bachelor world over here, which is actually kind of nice," Kevin told E! News in the same interview. "We get left alone a lot, but we also spend most of our time inside to be honest."

The Canadian fireman continued, saying, "We just enjoy each other's company. We cook every day. We watch TV, we work out every day and we eat ice cream sandwiches. Stuff like that."

It sounds like Kevin and Astrid have made their own little paradise for themselves.

More like this
Where Is Clayton Echard Now? The Former 'Bachelor' Star Is Dating Susie Evans
By Kadin Burnett
Everything Jarrette & Iyanna Have Been Up To Since 'Love Is Blind'
By Brad Witter
Indian Matchmaking’s Viral Revealed A Major Clue About Her Relationship With Aashay
By Radhika Menon
Laura Tott From 'First Dates' Married Her Long-Term Mystery Boyfriend
By Darshita Goyal
Get Even More From Bustle — Sign Up For The Newsletter