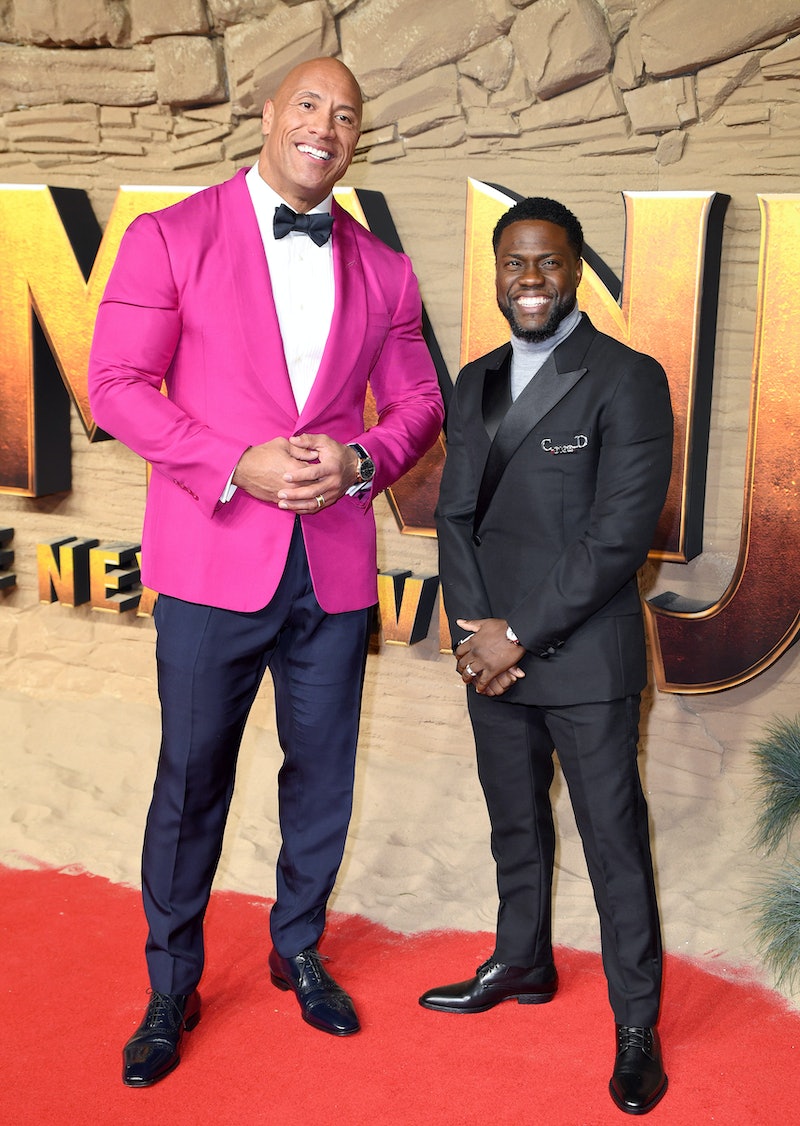 Despite the controversy surrounding last year's awards, Kevin Hart would host the 2020 Oscars if asked. Hart revealed as much to the Associated Press at the premiere of Jumanji: The Next Level. But, according to Variety, his answer also revealed something else, namely that he would be willing to co-host the biggest night in movies with his friend Dwayne "The Rock" Johnson.

In a tweet, Variety stated that the AP asked Hart "what he'd say if the Film Academy asked him and The Rock to host the Oscars." Hart responded, "Hey look, I have nothing but love for the Academy. I always will." The comedian continued, leaving the door wide open, "I think that, you know, any conversation is always a good conversation. So, TBD. To be determined."

Hart was originally slated to host the 2019 Oscars, which he called the "opportunity of a lifetime." But he stepped down after homophobic jokes he'd tweeted years earlier resurfaced, along with a 2010 standup special in which he said "one of my biggest fears is my son growing up and being gay."

Initially, he said that the unearthed tweets were just people "looking for a reason to be negative" and refused apologize for his past remarks, but in a tweet on December 7, 2018 — two days after it was announced he would be the host — Hart voluntarily stepped down. In a series of Tweets, Hart wrote at the time that he "did not want to be a distraction on a night that should be celebrated by so many amazing talented artists."

In that same tweet, Hart also apologized to the LGBTQ community "for my insensitive words from my past."

In the end, the Academy decided the 2019 ceremony would forgo a host. But in February, Johnson revealed that he had initially been asked to host the 2019 Oscars. "I was their first choice to host this year, and my goal was to make it the most fun and entertaining Oscars ever," Johnson tweeted, but he claimed he had to turn it down due to the shooting schedule for the Jumanji sequel, which hits theaters Dec. 13.

"Academy and I were super bummed," he wrote, "but maybe one day down the road."

In his brief interview with the AP on the Jumanji sequel red carpet, Johnson didn't say whether he would be interested in hosting this year, or sharing the duties with his co-star. However, he did say that fans should "get the tequila ready" when Hart talked about his willingness to host the Oscars.

The Academy has yet to announce its host for this year's ceremony, but it sounds like Hart's got some ideas.

More like this
Paul Mescal’s Family Celebrated His Oscar Nomination In The Sweetest Way
By El Hunt
Twitter Is Overjoyed By Angela Bassett’s Record-Making Oscar Nomination
By Maxine Harrison
How Andrea Riseborough Got Nominated — & Almost Disqualified For An Oscar
By Jake Viswanath
12 Years Ago, Austin Butler Manifested His Oscar Nom In This Disney Movie Scene
By Jake Viswanath
Get Even More From Bustle — Sign Up For The Newsletter
From hair trends to relationship advice, our daily newsletter has everything you need to sound like a person who’s on TikTok, even if you aren’t.