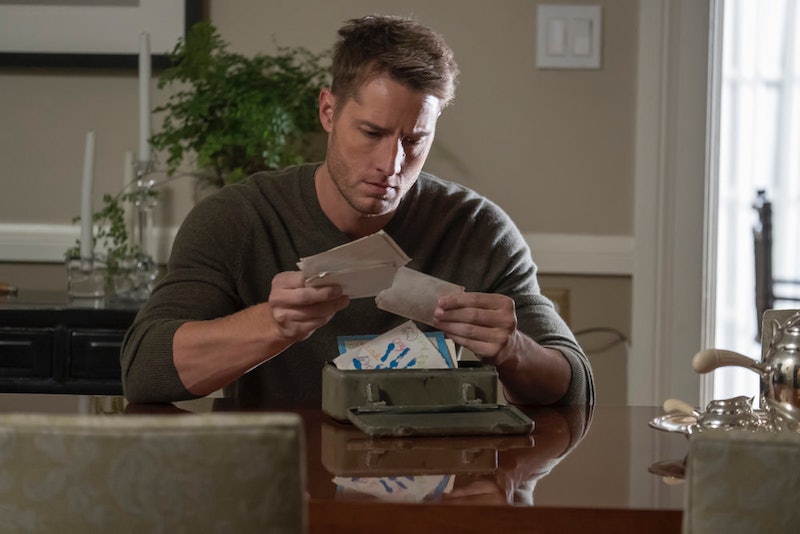 This Is Us Season 2 finale spoilers ahead. Kevin Pearson has some pretty big changes coming up in his future. As revealed on Tuesday night, not only does Kevin apparently begin to date Beth's cousin, but he's also going to Vietnam on This Is Us. In the final moments of the show's Season 2 finale, Kevin and Beth's cousin were on a plane as he held the military photo of Jack and his mysterious brother, and the intercom announcement declared that they'd shortly be arriving in Vietnam. Kevin must be heading there to get some kind of closure on his father's death, but it remains unclear what journey he takes to arrive at this point.

Kevin has always seemed to struggle with his Jack's death in a different way than his siblings or mother. It's not surprising, really, considering that Kevin wasn't home during the fire that ultimately lead to Jack's passing, and the fact that the last words Kevin said to his dad weren't exactly friendly. The others surely felt all the same pain Kevin has felt, they've just manifested it in different ways — but Kevin has been outwardly destructive to his own life, and this Vietnam trip could be proof that he's turning things around — or, at least, trying to.

He's been sorting through his feelings, slowly but surely, and viewers saw a big part of that culminate at Kate's wedding with his speech. Kevin had his mom and his siblings all take a deep breath with him and then release, in an attempt to "let go" of some of the things that have been weighing on them since Jack's death. That attitude, plus his conversation with Jack (or Jack's memory) in the Super Bowl episode, has started to show that he's ready to stop being so guilty and torn up over Jack's absence, and instead try to work through it. This trip to Vietnam could be one more piece of that.

Jack was always tight-lipped about his time in the military, and his relationship with his brother. It was unclear for a long time what he even did in the war, with Jack giving offhand comments in the first season, trying to downplay what he actually went through overseas. He did mention his experience, and his brother, to Randall, very vaguely, as they visited Washington, D.C. and passed by the Vietnam Veterans memorial, but it has always appeared as though he kept that information close to his chest during his lifetime. Now that Kevin found the photo that Jack so secretively kept hidden away in a box of keepsakes, this could be his way of getting closer to his dad in a way he never could before. He might be going to Vietnam to retrace Jack's footsteps, and visit the sites where he had some of his most life-changing moments.

It also seems really significant that Beth's cousin, Zoe, is with him on this trip — we haven't seen Kevin hold down a meaningful relationship since Sophie, and he didn't exactly end that romance well. Though this new love interest could dash the hopes of those waiting for him to reconcile with his ex, it does bode well that he's letting someone in, and doing so enough that she would accompany him on such a meaningful trip.

Zoe was also a compelling character on her own in the season finale, helping Deja come to terms with her situation with her mother. She's a character who has promise, and depth, and lasting power, so her relationship with Kevin definitely hints that things are looking up. No matter where this expedition to Vietnam or the new relationship take Kevin emotionally, they're both big milestones that could bring him closer than ever to peace. And that's what Jack would want.