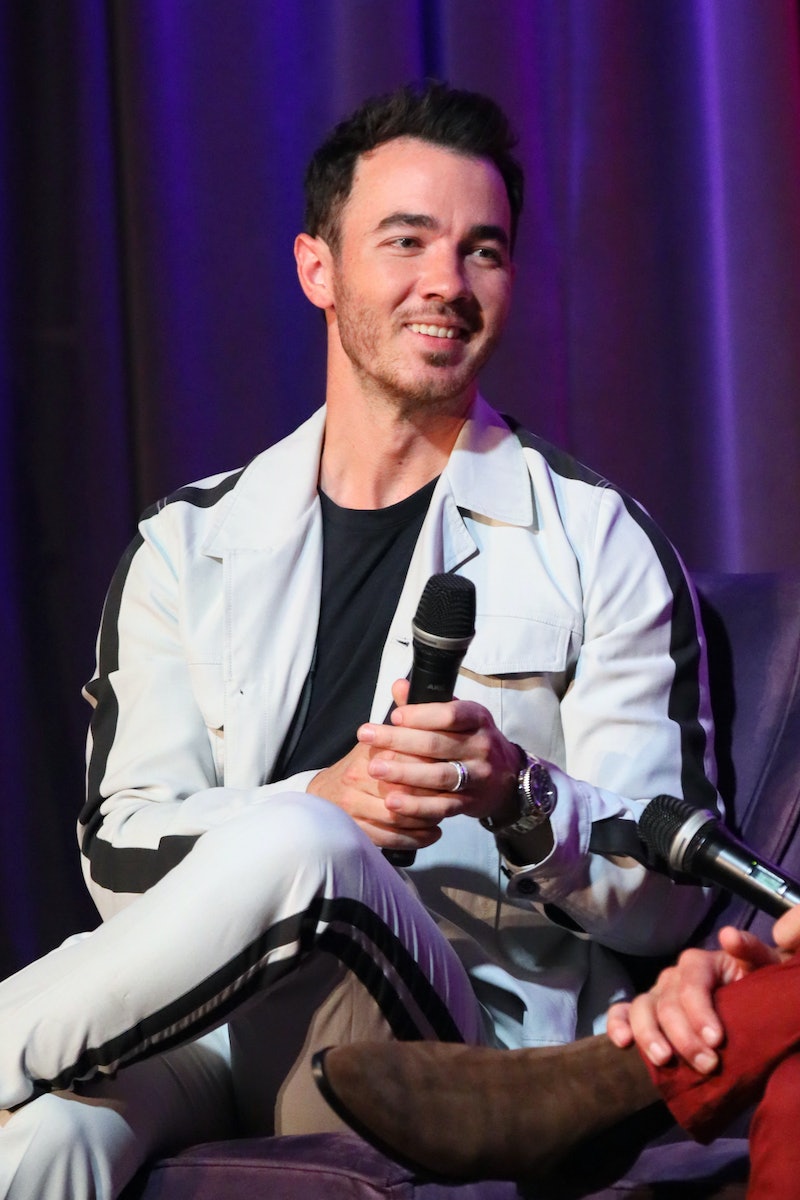 Hold up, there is another new celebrity tattoo in the world. This time, the new ink is a super sweet dedication. Kevin Jonas' new tattoo is a tribute to his wife Danielle, and the minimalist piece of art is so sweet.

Jonas took to his Instagram account on Oct. 18 to showcase his new tattoo. The ink, done by tattoo artist Winter Stone, is a small, single-needle design that appears to be on Jonas' forearm just below the bend of his elbow. As for the design, the new piece is based on Kevin's wife, Danielle Jonas', appearance in the Jonas Brothers' "Sucker" music video. The piece shows the outline of Danielle wearing the gorgeous, over-the-top pink, tulle gown from the video. Jonas even added a screenshot of his wife on a slide in his Instagram post so fans could see the inspiration themselves.

In his caption, Jonas wrote, "Brand new addition to the fam. So proud of this time in our life and getting to remember this with [Danielle Jonas] forever!"

This isn't Jonas' only tattoo in honor of his wife, though. According to Page Six, the Jonas Brothers guitarist already has her nickname, "Dani," on his left ring finger (yes, where his wedding band is) as well as four doves symbolizing himself, Danielle, and their two daughters.

Jonas's tattoo of Danielle comes closely after he added another bit of minimalist art to his collection. Back in September, the musician uploaded a photo of his forearm to Instagram showcasing a new stuffed bunny and bear tattoo. The piece, done by tattoo artist Dragon, is in honor of his two daughters.

Jonas wrote in the caption of the photo, "Newest piece to the collection thank you [Dragon] for making it come to life. Love bringing reminders of my girls with me everywhere I go!"

Of course, Jonas isn't the only member of the band who has tattoos for loved ones. Kevin's brother Joe Jonas and his wife Sophie Turner have ink dedicated to one another, and some matching pieces as well. According to Refinery29, Joe has the number 15 on his palm that allegedly represents the date he proposed to Turner. The couple also have matching pieces including a Buzz Lightyear quote and portrait tattoos of their late dog, Waldo.

As for Nick Jonas, he's got less ink than his brothers. However, he and Nick do share matching arrow tattoos on the backs of their arms that they got before the 2016 VMAs.

As for Kevin, his collection of sentimental tattoos continues to grow. With two pieces added so close together, another bit of ink could be coming soon.

More like this
J.Lo's Micro-French Manicure Has A Fun, Sparkly Twist
By Olivia Rose Rushing
Kim K, Oprah, & Jennifer Lopez Celebrated 25 Years Of Anastasia Beverly Hills
By Olivia Rose Rushing
Blake Lively Debuts Red Hair For The 'It Ends With Us' Film Adaptation
By Olivia Rose Rushing
The Best Beauty Looks Spotted At Paris Couture Week 2023
By Audrey Noble
Get Even More From Bustle — Sign Up For The Newsletter
From hair trends to relationship advice, our daily newsletter has everything you need to sound like a person who’s on TikTok, even if you aren’t.