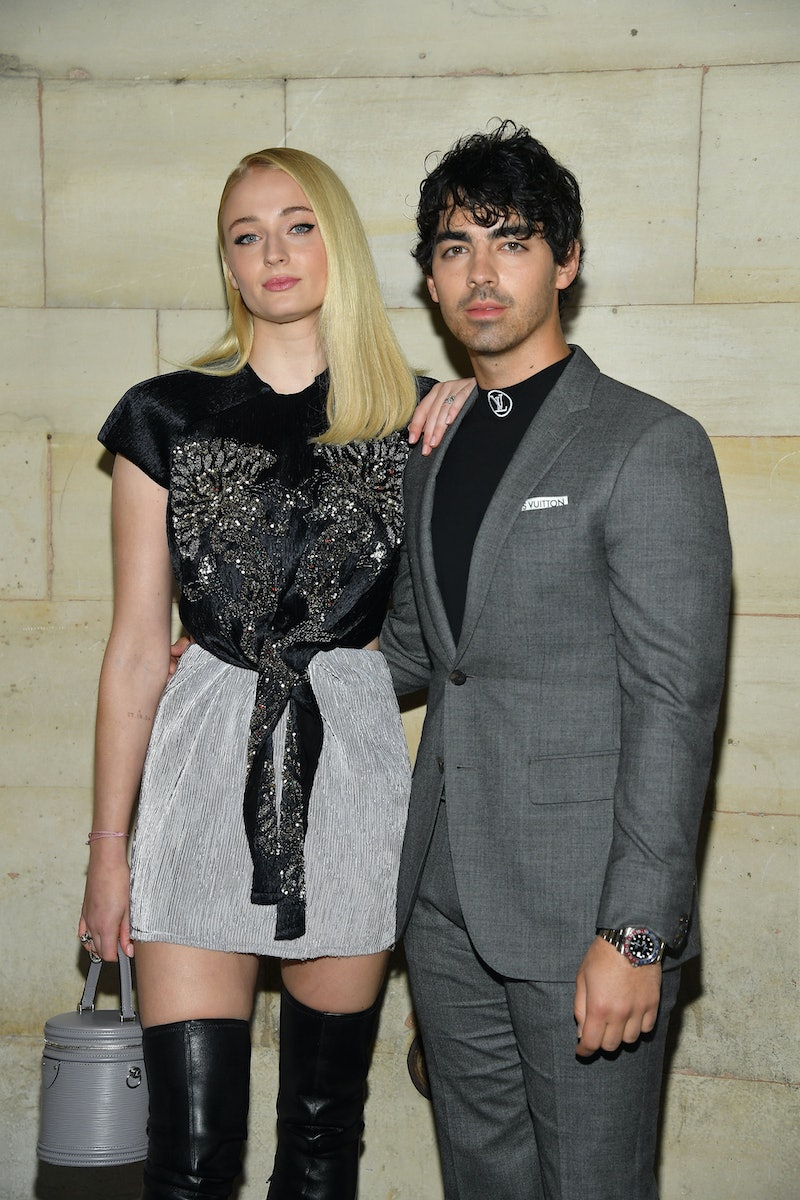 In case you hadn't heard, all of the Jonas Brothers are off the market. Yes, it's a sad day for your preteen self, but as an adult, at least you can celebrate your former flames' happiness. Plus, Joe Jonas and Sophie Turner's matching tattoos are going to make you shop them even harder than you already do.

If you haven't been paying attention to JoBro news lately, surprise! Joe Jonas is officially engaged to Game of Thrones and X-Men actor Sophie Turner. While Turner's fate on Game of Thrones is yet to be revealed (is she destined for the Iron Throne?), her love life is much more clear. Turner got engaged to Jonas back in October 2017, and while no wedding bells have rung yet for the two stars, fans are still low key obsessed with them and their future. Now, Jonas and Turner have gotten matching Disney tattoos that are going to make their shippers even happier.

According to an Instagram post from tattoo artist Mr. K of Bang Bang Tattoo, Turner and Jonas made their love permanent by getting Buzz Lightyear of Toy Story's well-known motto, "To Infinity and Beyond" tattooed on one other. Jonas's wrist reads, "To Infinity," while Turner's wrist finishes the phrase with "And Beyond."

Mr. K tagged both Jonas and Turner in the photo letting fans know that yes, it is, in fact, them. Plus, in an Instagram story, Turner reposted the image to her own social media. If you had any doubts about whether or not the ink was actually the couple's, that should assuage those concerns.

Adding to the cuteness of the tattoo, it's hard to deny the connection between Jonas and Disney. After all, he did kind of start his career with the Disney Channel. Maybe he's still got a soft spot for the studio.

The new ink, however, isn't the first time that the engaged couple has gotten tattoos together. A few months ago, the Turner and Jonas went to Mr. K (the same artist that did their Toy Story tattoos) and got ink together. No, they're not sharing more matching tattoos, but their new art is somewhat coordinated.

Both Jonas and Tuner got tattoos that pay tribute to their grandfathers. Jonas had a portrait done of his grandfather while Sophie got the letter G to presumably stand for her grandfather's name or title on her finger. Yes, it's enough to melt your heart.

Of course, this isn't Turner's first tattoo she's gotten with a partner. It's no secret that Turner and Game of Thones co-star Maisie Williams are close friends, and they cemented their friendship by getting matching tattoos. Back in 2016, the pair appeared on the Emmy's red carpet together where their matching ink made its debut. The pair had the date of their respective Game of Thrones castings tattooed onto their arms, and it's totally proof that they're BFF goals.

Whether you're into couple tattoos or not, it's hard to deny just how cute Jonas and Turner's Toy Story tattoos are, and it's proof that their love will last longer than anyone's reign in Westeros.