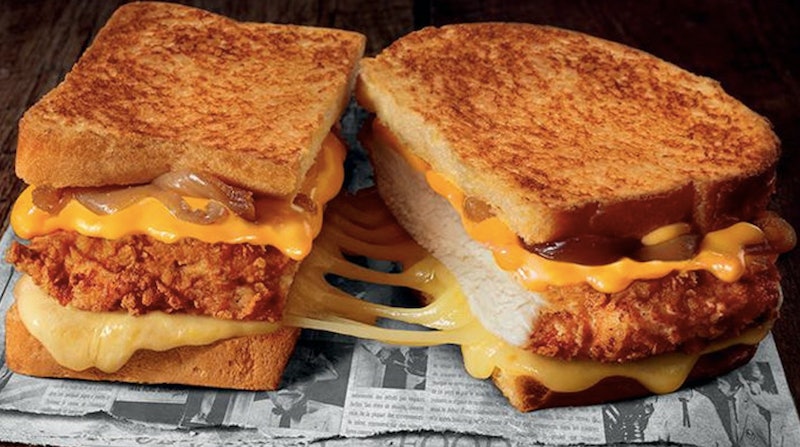 If there is one food that comes to mind when you talk about France, it is cheese. France is known the world over for its rich cuisine, and embrace of some of the most indulgent ingredients. But it would appear this attitude isn't limited to upscale dining. One of the most quintessential American fast food chains is now offering something extra special in France. No, it's not fries. A Kentucky take on the Croque Madame or Monsieur, KFC France has just introduced the Colonel Grilled Cheese.

The Colonel Grilled Cheese, per Chewboom, "features a marinated and breaded chicken fillet sandwiched between French mozzarella, cheddar cheese sauce and caramelized onions, on toasted sandwich bread." Basically it is the ultimate grilled cheese sandwich with two different kinds of cheeses. Then, if that's not enough, onions and a filet of KFC fried chicken are added to the mix. Overzealous, maybe, but it is Kentucky Fried Chicken that has come up with the sandwich, so it stands to reason chicken would be included somehow.

KFC in the United States is no stranger to sandwiches. In fact, four distinct sandos are listed on the website's menu currently. But, there are some noticeable differences right off the bat. First and foremost, none of them include cheese (let alone two different kinds of cheese). Second, the bread is different. You wouldn't make a grilled cheese with a typical burger bun, though, so it makes sense.

The other sandwiches you can find on the KFC menu in the United States include the Crispy Colonel Sandwich , the Smoky Mountain Barbecue, and the Nashville Hot. Each of these begins with a filet of crispy fried chicken. The original sandwich embraces its purity and is not paired with any sauce, and is finished with mayo and pickles (as are the other variants.)

There appears to be a theme at KFC HQ when it comes to new items being dropped. It begs the question: why eat fried chicken when you can eat it between slices of bread? There is no logical explanation, especially if you are adding some Cheetos to the mix. Certain markets in the southern U.S. are about to get a taste of something out of a ten-year-old's fever dream: the Cheetos Sandwich. According KFC, the item is "[m]ade by coating a juicy, hand-breaded Extra Crispy chicken filet with special Cheetos sauce and placing it on a toasted bun with mayo and a layer of crunchy Cheetos, the Cheetos Sandwich will give you a blast of craveable Cheetos in every bite." If you're struggling with that visual, just imagine Cheeto-coated chicken, plus more Cheetos sandwich between a burger bun.

To get your hands on the Colonel Grilled Cheese or the Cheetos Chicken Sandwich, you might need to work a little harder than usual. The latter is currently being tested exclusively in the southern U.S. But, if the plane ticket required to procure the former dish isn't a deal-breaker, Chewboom reports you can snag one with your choice of one side and a drink for 9.20 euros, which is roughly $10.40.