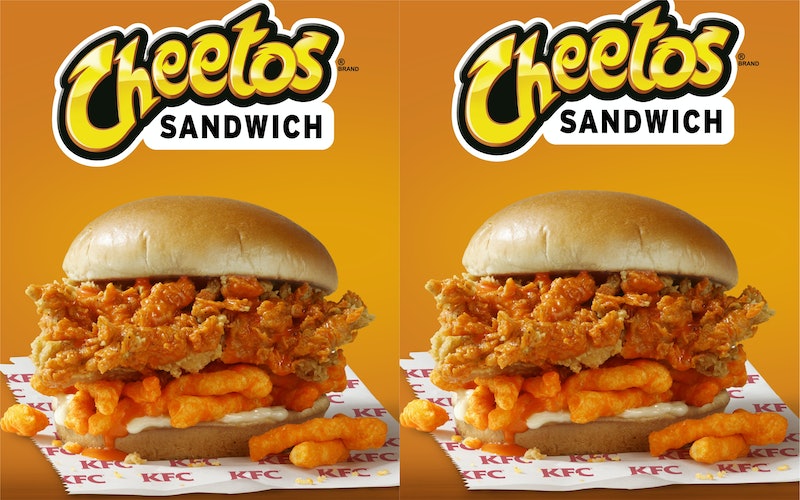 As a person whose favorite genre of food can be roughly described as "What delicious thing can I add to this already baseline delicious thing to maximize its deliciousness, no matter how potentially unholy or difficult to digest?", I am most pleased to inform the internet that KFC is testing a Cheetos Sandwich in locations in several states. That's right: the iconic cheesy snack that defined your childhood, teenage-hood, and general ongoing existence will now be smushed between two pieces of toasted bun and Extra Crispy KFC Chicken. The future is now, and it comes with extra crunch, y'all.

Now, I'm sure you're thinking to yourself, "Why do you want me to get so excited about someone putting Cheetos in a KFC Sandwich? I can/have/am currently do(ing) that myself." It turns out this collab has a little something extra up its sleeve: specifically, a Cheetos sauce that will be added to the equation. Per KFC, the currently testing menu addition is "[m]ade by coating a juicy, hand-breaded Extra Crispy chicken filet with special Cheetos sauce and placing it on a toasted bun with mayo and a layer of crunchy Cheetos, the Cheetos Sandwich will give you a blast of craveable Cheetos in every bite."

TL;DR: this sandwich is Cheetos and chicken and more Cheetos, because KFC gives the people what they want, even when they don't know they want it yet.

Without any further ado, here is the Cheetos Sandwich in all of its orange, glistening glory.

Granted, this is not a nationwide menu addition at the moment — while the test launch starts today, it's only available in "select restaurants throughout the Greensboro, North Carolina, Raleigh, North Carolina, Roanoke, Virginia, Richmond, Virginia and Greenville, Georgia area," per KFC. If you are in one of those areas, congratulations! If you're not in one of those areas, let's pool our money together and ride share immediately, because I'm assuming this is our collective top priority going into 2019.

Real talk, though — if you're not in the test market, don't despair. Odds are if this does well enough in testing, KFC will consider a nationwide rollout of the Cheetos sandwich, at which point we will be able to maximize the deliciousness of the Crispy Chicken sandwich from sea to shining sea (or, more fittingly, cheese to crunchy cheese).

If this doesn't seem like the dream combo to you, trust that this isn't the first time KFC has taken a risk with one of its sandwiches that ultimately paid off; you may recall last year, when KFC dropped both Pickle Fried Chicken that semi-broke fast food stans on the internet, and also brought us limited edition Chicken & Waffles so delicious that they are still tangled in my waking dreams months after consuming them. So take a chance! Hit up your friends who live in one of the test states pretending you want to catch up, when really you just want a Cheetos Sandwich! They'll understand once they see it — this kind of opportunity comes but a few times in a life, and is more than worth the risk.