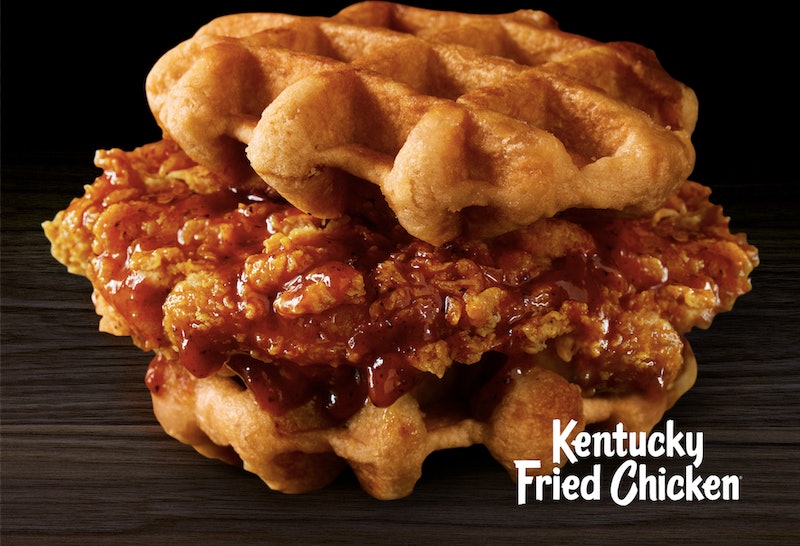 Kentucky Fried Chicken is doing what it should have done years ago, long before using chicken as sandwich bread or currency or whatever it's doing with its deep fryers. Yes, KFC is finally serving chicken and waffles just as the fast food gods intended.

Starting Nov. 12, until Dec. 31, nearly every KFC location across the country will be serving chicken and waffles and, in turn, serving happiness in food form. “Our famous extra crispy, savory fried chicken atop a Belgian Liege-style waffle, with the finishing touch of classic Mrs. Butterworth’s syrup, makes for a scrumptious dish I’d put up against versions at upscale restaurants, but we’re offering it at a price just about anyone can afford,” Andrea Zahumensky, KFC’s U.S. Chief Marketing Officer, said in a press release. “And it can be enjoyed at KFCs across the country for brunch, lunch or dinner.” Or brinner (breakfast for dinner). Or second lunch. Or fourth meal (sry Taco Bell). Or an afternoon snack.

If you’re a waffle aficionado, KFC is using a yeast-raised dough instead of a batter for its waffles. The waffles also include “pearl sugar imported from Belgium that creates a delectable sweet and crunchy outer texture.” Bob Das, KFC’s head chef, said the Belgian Liege-style waffles are “sweeter and doughier” than our standard American waffles, making for the ideal savory-sweet combo. Excuse me while I wipe this drool off my keyboard.

This isn’t the first new menu item KFC has added this year. Perhaps you heard tale of a KFC pickle-fried chicken that was available for a limited time this summer. (Pickle haters, you might want to avert your eyes and gird your tastebuds.) The pickle-fried chicken answered the age-old questions, “What if a fried pickle and a fried chicken had a baby, and I could eat that baby?” The sandwich featured KFC’s extra crispy chicken “coated it in pickle sauce.” The result was forward notes of vinegar and dill you’ve come to know and love (or despise) in a pickle plus a sauce that featured “onion and garlic notes, buttermilk and a white and black pepper blend.”

Basically, if KFC can fry it and add the word “chicken” to it, it's going to do it. KFC chefs are one crisis away from a deep-fried Twinkie and fried chicken sandwich.

As if food hybrids weren’t enough, KFC also announced a campaign earlier this year in which it would give $11,000 to the first baby named “Harland” born Sept. 9, 2018. As an homage to its namesake (Harland David Sanders) and to the 11 herbs and spices used in its chicken (hence the $11,000 prize), KFC asked chicken fans expecting a child, “Just how much do you love chicken?”

For one family, apparently the answer was $11,000 and their newborn baby. The parents of Harland Rose, born on September 9, 2018, received an $11,000 college scholarship for naming their daughter after the colonel. Chicken or not, Harland is a pretty cute name. (Think of the nickname possibilities! OK, it’s mostly just Harley but still!) While you can no longer claim the $11,000 scholarship money, you still have plenty of time to get the KFC chicken and waffles, which, honestly, is a pretty good consolation prize.