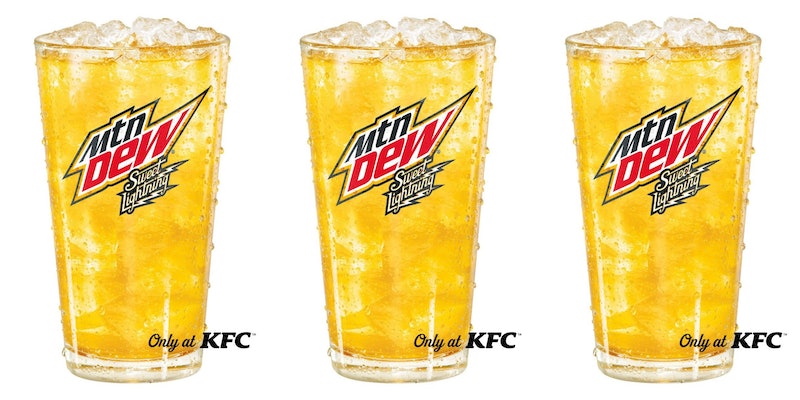 Courtesy of KFC and Mountain Dew

Some people are cola people. Some people are lemon-lime soda people. But Mountain Dew people seem to have a particularly strong allegiance to their soda of choice — which means that, if you yourself are a Mountain Dew person, you’ll be pleased to know that a new Mountain Dew flavor, Sweet Lightning, has just arrived on the scene. There’s a catch, though: It’ll only be available at KFC restaurants. Soda fountains at the classic fried chicken chain will begin to carry the drink nationwide starting on July 1, though, so if you’re based in the United States, odds are you’ll be able to get your hands on the new flavor soon.

News of Sweet Lightning first leaked a few months ago, with a handful of fan sites noting that a number of new Mountain Dew flavors — including Liberty Brew, which also became available recently — were on the way for 2019. By April, Sweet Lightning had been spotted in the wild — and now, it’s finally, officially here. Or, more accurately, almost here, since it won’t be available nationwide until July 1.

Like its name might imply, Sweet Lightning is a bright and punchy soda meant to “electrify” KCF’s drink lineup, according to a press release. Orange-yellow in color, it features flavors of peach and honey — and once it arrives, it’ll be part of the permanent menu at KFC.

“Like KFC, MTN DEW is inspired by bold ideas and flavors, making this an authentic relationship from the start,” Nicole Portwood, vice president of marketing for Mountain Dew, said in a press release. “To come together on an exclusive product — Sweet Lightning — is a thrill, and we look forward to delighting our customers' taste buds and pushing the envelope on creativity.”

Taste-wise, it does appear to be on the sweeter side, according to early reviews; the Impulsive Buy, which tried it back in May, thought it was a little “toothaching,” although the food review site also stated that the “shocking sweetness” did pair well with KFC’s saltier offerings. Meanwhile, Redditor u/ATownAndrew posted a short review to the soda-centric subreddit r/ToFizzOrNotToFizz back in April, comparing it favorably to Peach Fanta. The flavor does sound unique — peach sodas tend to be somewhat rarer than many other varieties — so even if you’re not a fizzy drink kind of person, it still might be worth trying at least once, even if it’s just for the novelty of it.

This isn’t the first time Mountain Dew has released a flavor exclusive to a specific fast food restaurant. In 2004, Mountain Dew Baja Blast launched at Taco Bell — and now, 15 years later, it has become an institution all its own. Indeed, the bright turquoise soda, which I only recently learned is ostensibly “tropical lime”-flavored, eventually gained such a huge following that the brief and limited times in which it has been available in bottles — which notably included the spring of 2018 — have all been heralded as Huge, Huge News.

Will the same thing happen to Mountain Dew Sweet Lightning? Only time will tell. Like Baja Blast before it, though, Sweet Lightning was developed specifically to complement the flavors of the restaurant chain at which it’s available, so if that formula turns out to be part of what led to Baja Blast’s popularity, then maybe history will repeat itself here, too. KFC seems to think it might; said KFC U.S.’s chief marketing officer, Andrea Zahumensky, in a press release, “With the addition of Sweet Lightning, we now have a drink that is as unique to KFC as the Colonel's secret blend of 11 herbs and spices. And like our world-famous fried chicken, Sweet Lightning will keep fans coming back for more.”

It’s worth noting, by the way, that Taco Bell and KFC are both owned by Yum Brands — which, you might recall, also counts Pizza Hut in its stable of fast food giants. Could Pizza Hut be next in line to get its very own Mountain Do flavor? There’s no word on that front yet — but if it were to happen, let’s just say that it wouldn’t be a surprise.

Mountain Dew Sweet Lightning is set for nationwide release at KFC locations across the United States on July 1. Be on the lookout for a new mascot, too; also named Sweet Lightning, he seems to be the fast-talking fella who brought the new drink to Colonel Sander’s attention — according to company lore, that is. (Sweet is fictional, but we can probably look forward to some, uh, interesting commercials featuring the new guy alongside the Colonel himself.) You can find out where your nearest KFC is here.

More like this
An Expert Weighs In On The Viral Raw Carrot Salad Trend
By Alexis Morillo
Learning To Love, Not Judge, The Lunchbox Wives Of TikTok
By Esther Zuckerman
I Spent 2 Years Trying TikTok’s Dating Advice
By Kailynn Johnson
Wait, Does Liking Someone's IG Story = Shooting Your Shot?
By Alexis Morillo
Get Even More From Bustle — Sign Up For The Newsletter
From hair trends to relationship advice, our daily newsletter has everything you need to sound like a person who’s on TikTok, even if you aren’t.