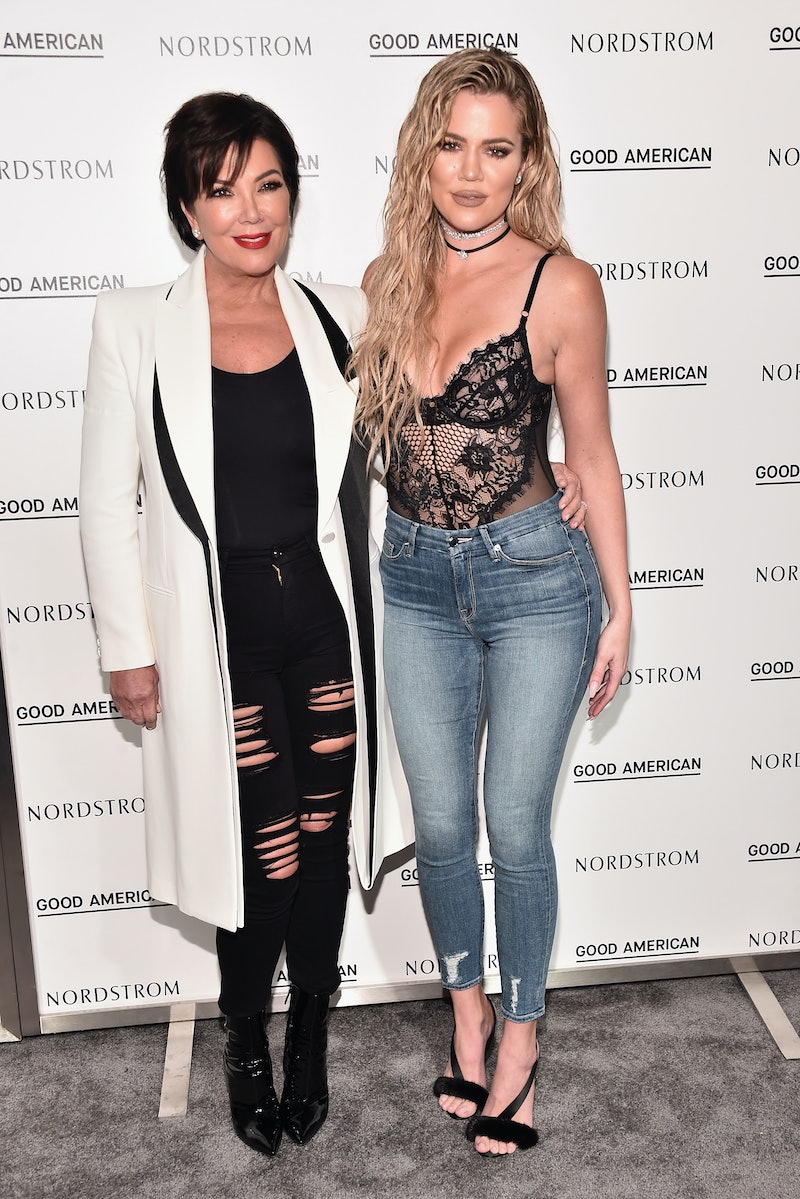 The Kardashians are living it up during their tropical vacation, as evidenced by their various Instagram posts, of course. In one of the very best photos from their trip, Khloé Kardashian, baby True, and Kris Jenner channeled Cardi B for a fun family snap. And it will definitely be the cutest thing you see all day.

On Sept. 6, Kardashian posted the photo from her recent family getaway and gave fans a little peek into one of the crew's sillier moments. The Revenge Body host posed alongside her mom, Jenner, who held little True Thompson in the photo, which featured a truly picturesque tropical locale. The three then did their best "Cardi B" for the camera as they all stuck their tongues out for the pic, which is pretty much the rapper's signature pose. Kardashian captioned the photo, "Trying to do our best Cardi B," along with an emoji with its tongue out, naturally.

The photo is totally all kinds of adorable, especially since baby True even got in on the posing fun just like her mom and grandma. And it's also fun to see the reality star specifically mention that her fam's donning the rapper's classic pose. While the "Bodak Yellow" artist hasn't commented on the snap just yet, considering the fact that she's hung out with the Kardashians in the past, it's likely that she's living for the ode to her cheeky move.

Back in August, Cardi met up with a couple members of the famous family, as she showed on Instagram. She posed with Jenner and Kim Kardashian, who was tasked with taking a selfie of the group, because of course. In the caption for the post, the "I Like It" singer joked, "Im officially part of the rich people club!!" She then continued to get her joke on with, "P.s I'm selling one of @krisjenner napkins on eBay!!"

She wasn't the only one having a bit of fun with their meet-up. In response to the new, shorter hairstyle she had at the MTV Video Music Awards, one user online joked that Cardi was doing her best "Kris Jenner" after hanging out with the momager. The rapper had some fun with the joke herself, reposting it on her own Instagram with the caption, along with some lighthearted emojis, "Ya need to leave me alone." Jokes aside, based on these two Insta pics, it really does seem like the love is mutual between Cardi and the Kardashians, which is just about the most delightful thing ever.

In addition to getting their Cardi on during their vacay, the new mom also got to spend some quality time with her little one. As seen in another Instagram post from their getaway, Kardashian and baby True hung out in the pool together, with the new mom captioning the snap, "Me and my girl!!" Based on all of their social media posts from their trip, it really seems as though the KarJenner family had a blast during their most recent vacation, Cardi poses and all.