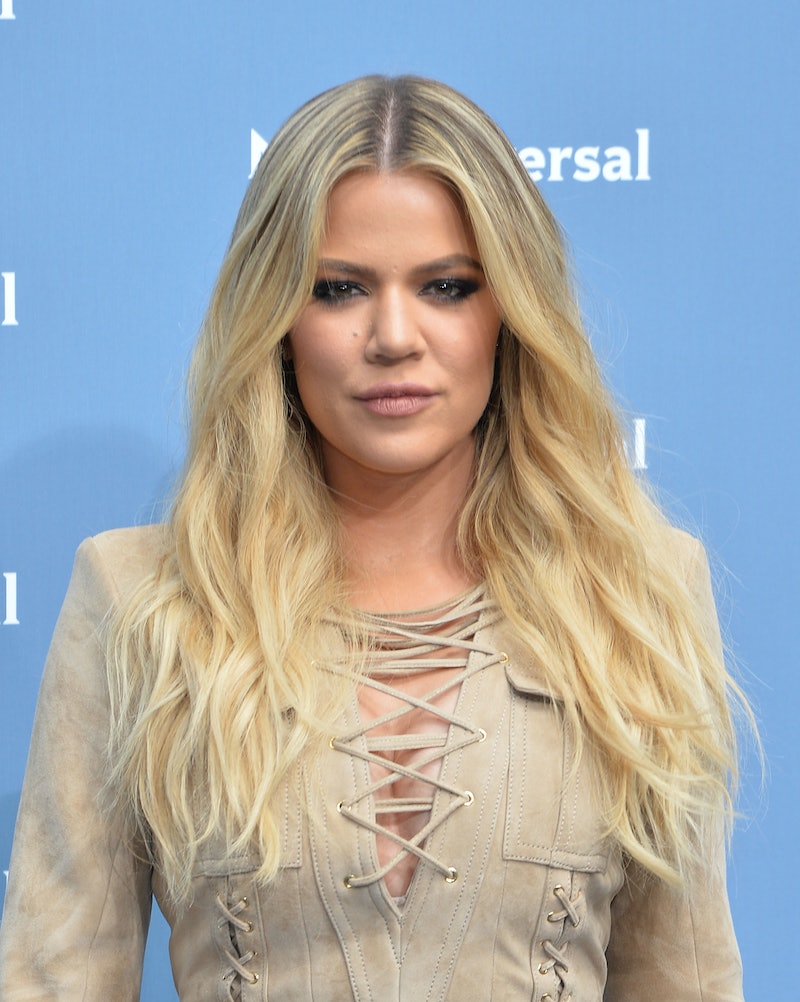 The Kardashians aren't afraid to call out fake news, just like when Khloé Kardashian shut down rumors about Tristan Thompson and their relationship Monday on Twitter. On June 25, the Daily Mail tweeted, "Khloe Kardashian and Tristan Thompson's VERY tense dinner date". The story and tweet got Kardashian's attention, so she of course replied by writing:

You make up anything!! I actually had a great night. It was a large birthday dinner for friends and as a new mom IM TIRED AF!! Being out past 10pm is not where I’ll have the most energy these days.

Preach, Kardashian. Just because she isn't smiling doesn't mean she's having relationship issues. A fan, clearly in support of Kardashian and understanding what it's like to be a new mom, tweeted the reality star, "I am lucky if I am good past 8:00pm some days!" The Revenge Body host totally agreed and responded, "My little mama [referring to her daughter, True Thompson] goes to bed at 8. So I have a few hours to enjoy 'being an adult' but truthfully I would rather just stay home with her. But I tried last night lol".

According to the Daily Mail, the Keeping Up With the Kardashians star looked like she didn't have fun during her June 24 outing with Thompson. "But as she yawned her way through a date with Tristan Thompson (and his friends) this weekend, there was no evidence of the reality star's bright, bubbly personality," the article reads. "Instead the 33-year-old looked tired and distracted throughout the meal, which she spent seemingly ignored by her cheating beau and their dining companions. Even an enormous new diamond, sparkling on her ring finger, did nothing to improve her mood."

In the photos obtained by the publication, the Daily Mail also described Kardashian as "miserable" and even wrote, "But having made the effort to get out, looking her best with a full face of makeup, the mother-of-one certainly didn't look like she was having fun."

Well, according to Kardashian, she was just exhausted and wanted to get home to her baby girl. Being a mom is hard and tiring work, so it's totally understandable why the reality star wasn't sitting at the table with a huge smile on her face. Let's all remember, women don't have to always be smiling or look happy. Also, just because a woman is wearing a "full face of makeup" doesn't mean she isn't tired or has to act like she's having the time of her life.

Speaking of smiling, Kardashian answered a fan who said she looked "stunning" by writing: "Thank you!!! Just was tired lol need to work on my tired smiling face." Kardashian, you do what is best for you and if you're too tired to smile or simply don't want to smile, then you definitely don't have to. She tweeted another user, "Lol I was thinking my resting face I still think is fine lol". It totally is, Kardashian.

The Strong Looks Better Naked author told one Twitter user she's been trying to push herself to do more and to have more time for herself, but, as any new mom can probably relate, "... honeyyyyy the bed is soooo appealing lol". She also told another fan, "It’s really so exhausting but I’m trying to have a good balance."

Kardashian certainly hasn't had an easy time in the past few months. Between dealing with the cheating rumors involving Thompson and becoming a new mom to her daughter, True, she's had a lot on her plate. (Bustle previously reached out to representatives for Kardashian and Thompson about the cheating rumors, but did not receive a response.)

She's even still fielding criticism over Thompson. In response to a fan's tweet Monday calling her a "hypocrite" and expressing disappointment over Kardashian trying to work it out with Thompson, she wrote,

Not exactly Queen Persia, you have no knowledge of what goes on in our household or the enormous rebuilding this takes to even coexist. I’m proud of my strength. I appreciate your opinion and I hope you hold that same opinion to everyone else who has stayed in situations.

So, if Kardashian looks tired or unhappy, don't jump to conclusions. She's already been through so much. Her main priority now is being the best mom she can be to True and the last thing Kardashian needs to do is battle more rumors.