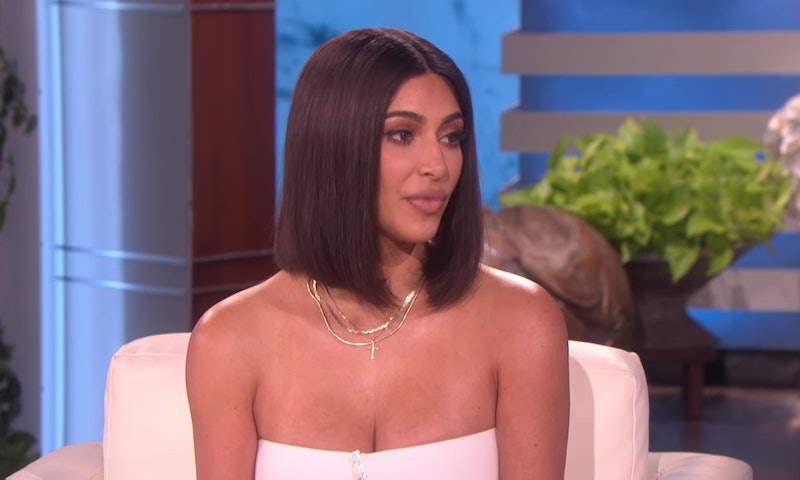 Have you been wondering what's going on with Khloé Kardashian and Tristan Thompson? Well, look no further, because Kim Kardashian commented on Khloé and Tristan's current status. During a Monday appearance on The Ellen DeGeneres Show, Kim was open about her younger sister's ongoing situation ever since the cheating reports involving Thompson made headlines and Khloé welcomed her first child, True Thompson. (Bustle previously reached out to representatives for Kardashian and Thompson about the cheating rumors, but did not receive a response.)

Ellen DeGeneres directly asked Kim (around the 2:15-mark) about whether or not Khloé and Tristan are together or if she's still trying to make it work. Kardashian was careful not to confirm anything or to directly speak for her sister, but the response the Keeping Up With the Kardashians star gave revealed a lot about where Khloé's head is at right now.

"You know, I think she's not thinking of anything. I think she just wants a clear head and just wants to be alone with her baby and figure that out," the 37-year-old reality star said.

Having alone time and figuring out exactly what she wants is one of the reasons Khloé is still in Cleveland. That's right, Kim confirmed the Revenge Body star hasn't left the Ohio city — and for good reason.

"She wanted to have some, you know, alone time with the baby and, you know, figure out what her next steps are," Kim told DeGeneres. "I think it must be so hard to have your heart broken and fall in love all in a day or two, all happening at the same time."

Kim continued and explained Khloé isn't one to even speak with her family about private issues she may be experiencing. Kim said that's exactly what happened when Khloé and Lamar Odom were having problems.

"When she's gone through really tough things in the past she's always kept that from us and kind of dealt with it until it became public," the Selfish author said. "You know, stuff with Lamar, things I guess were happening for a year and we didn't know about it. We always think we're so close, but she does such a good job at keeping that so private."

However, Kim noted how Khloé's present situation with Thompson is different. Before Khloé had to time deal with the cheating rumors or determine how she wanted to move forward in private and without everyone else knowing what was going on, videos of Thompson reportedly cheating hit the internet. Furthermore, Khloé had to handle it while still pregnant and days away from giving birth. Like Kim said, "So, because this is not so private, I think she's just like, 'I need a minute to myself.'"

Kim was also very honest with DeGeneres about the Thompson cheating reports. "Like, I don't even know how to describe it besides it's just so f*cked up," she bluntly stated. "We really were rooting for Khloé — and we still are. She's so strong, and she's doing the best that she can. It's a really sad situation all over."

That said, Khloé has a great support system in her family. They clearly all have her back, including giving her breathing room when she asks for it. No one can fault the Good American co-founder for choosing to remain behind closed doors and to come to terms with everything in private. During what should be a completely blissful moment in her life, Khloé sadly has been through a lot — and in such a short amount of time. So, if she needs to be alone, that's exactly what the 33-year-old deserves.