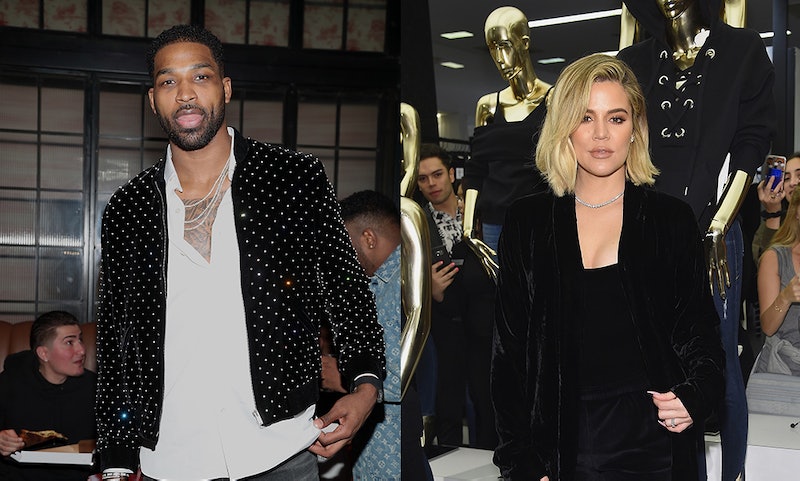 On Tuesday, April 10, TMZ posted a video of Tristan Thompson seemingly cheating on Khloe Kardashian with two women at a hookah lounge in Washington, D.C. TMZ reported that the video is surveillance footage was recorded on Oct. 7, 2017. (Bustle reached out to Kardashian's reps and Thompson's agent for comment on the video, but did not receive an immediate response.)

The 59-second video footage obtained by TMZ is black and white and grainy and it is difficult to tell if the man in the video is indeed Thompson. The video shows a man who is sitting with two unknown women and the man leans over to kiss one of the women. As the video continues, the other woman seems to pull the man's head toward her breasts. The woman then seems to put her hand on the man's crotch in the video.

Earlier on April 10, reports circulated that Thompson appeared to kiss another woman who was not Kardashian in New York City last weekend. The Daily Mail shared grainy footage that the publication claimed to be of Thompson at a club in New York City on Saturday night, though this footage is difficult to decipher and the faces in it are not clearly seen.

Thompson and Kardashian began dating in 2016 and Kardashian is reportedly nine months pregnant with their child. Kardashian joyfully announced the pregnancy via Instagram in December 2017, writing the following:

Since then, Kardashian has shared several updates about her pregnancy. On Monday, April 9, Kardashian posted a photo of herself and Thompson to Instagram, writing the following in the caption:

Last month, the Kardashian family game together to celebrate Kardashian and Thompson's baby at a pink-themed baby shower, attended by Kardashian's sister Kourtney and her mom Kris Jenner, among other friends and family members. In a March episode of Keeping Up With The Kardashians, Khloe Kardashian revealed that she and Thompson were having a baby girl.

Thompson and Kardashian have yet to publicly address the rumors and the reports that are currently circulating. Kardashian's most recent Instagram story posts are about what it was like to be there for the birth of her sister Kylie Jenner's baby Stormi, Kylie Cosmetics, and a tribute to her siblings for National Sibling Day.

According to NBA.com, Thompson's Cleveland Cavaliers are not playing a game during the night of April 10; the team will play the New York Knicks in Cleveland's Quicken Loans Arena on April 11. Thompson posted a photo of himself in sunglasses on Instagram earlier on April 10 and Thompson's latest tweet on his Twitter account is from April 5 and it said, "GAME DAY!!!"

As of right now, the rumors about Kardashian and Thompson are unconfirmed reports.

More like this
Kendall Jenner Thinks Tristan Thompson "Wanted To Trap" Khloé With Another Baby
By Jake Viswanath
Tristan Thompson Proposed To Khloé Kardashian & She Said No
By Jake Viswanath
Khloé Kardashian Is Reportedly Dating A Private Equity Investor She Met Through Kim
By Jordyn Tilchen and Jake Viswanath
Dixie D’Amelio & Noah Beck “Love Each Other” Despite Breakup Rumors
By Julia Emmanuele, Jordyn Tilchen and Grace Wehniainen
Get Even More From Bustle — Sign Up For The Newsletter