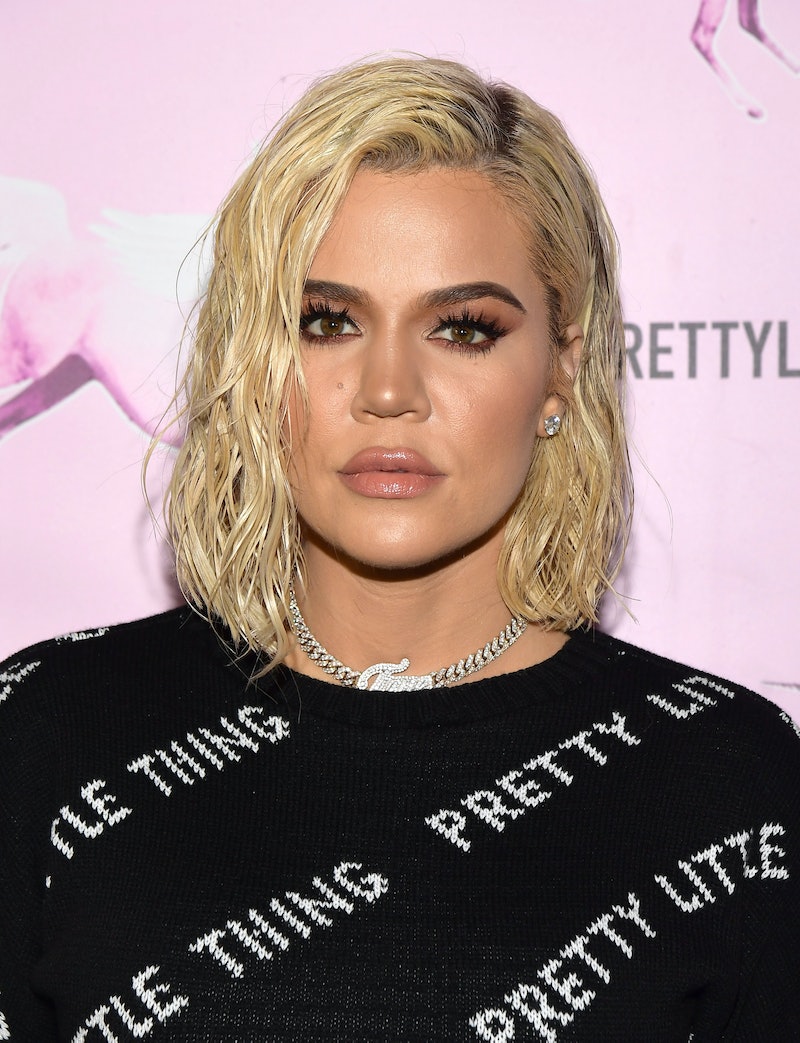 It doesn't look like the Bachelor franchise will crossover with Keeping Up with the Kardashians anytime soon. On Saturday, Feb. 23, Khloé Kardashian shut down The Bachelorette rumors on Twitter, responding to a series of tweets in which creator Mike Fleiss teased the possibility of her joining the show. The exchange came after it was confirmed that Khloé and Tristan Thompson split earlier this week amid cheating rumors. On Feb. 18, Fleiss asked Bachelor Nation who the franchise's next star should be, and some fans took to social media to support the reality star appearing on the popular ABC series.

Fleiss quickly teased that Khloé joining The Bachelorette could become a reality, tweeting:

"Any decision regarding @khloekardashian as the new #TheBachelorette will need to be approved by my dear friend @KrisJenner ..."

On Friday, Fleiss once again seemed to imply a deal was in the works, and that he'd already been in touch with the Kardashian-Jenner family. He wrote: "I have already been in contact with my dear friend @KrisJenner about @KhloeKardashian as #TheBachelorette. Stay tuned!!!".

It's not clear whether Fleiss really approached Kardshian's mother, Kris Jenner, with his proposal, but the Kardashian-Jenner family wasn't amused by The Bachelor producer's tweets. Kim Kardashian tweeted the rumor was fake, writing, "Fake f*cking news big time!!!!" Fleiss tried to tell fans that Kim wouldn't be involved with the talks, fanning the flames by writing, "How would Kim Kardashian know??? This is between me and @KrisJenner — and most importantly @khloekardashian!!!"

However, Khloé was quick to clap back at Fleiss as well, writing: "I’m not f*cking clickbait right now. Stop or you will be hearing from my lawyers. How insensitive!!"

Fleiss tried to do some damage control and walk back the proposal, writing on Twitter, "This is about helping people find true love— nothing more!!! #TheBachelorette." The Bachelor creator also tweeted that the offer was a joke, writing, "One of the things we look for in choosing #TheBachelorette is a great sense of humor... Might be time to look elsewhere." He also further defended the comments about wanting Khloé to appear on the show, tweeting: "I sincerely offered our assistance. If a certain someone thinks he/she doesn't need our help to find true love, so be it!!! #TheBachelorette."

Meanwhile, the Kardashian-Jenner family continued to shut down the possibility on social media. On Saturday, Kim shared a screenshot of a text conversation with Jenner and Khloé on Twitter. In the text she wrote, "Are u guys in talks w the bachkorettte?" to which Jenner responded, "No lol," and Khloé wrote back: "Ewwww I mean put some respeck on my name." Kim tagged the Bachelor producer in the tweet, writing, "..... @fleissmeister."

This isn't the first time that the Kardashian-Jenner family has taken to social media to defend Khloé since the high-profile split. On Thursday, Kim responded to a tabloid story on Twitter, shutting down the attempt to shame Khloé for attending an event after the break-up. She wrote:

"Would you prefer she lose the $ too? A single mom has to work too boo! This was a professional commitment planned far in advance and you better believe she is not waiting on anyone to pay her bills or provide for her daughter. PERDIODT!!!"

It is likely a difficult time for Khloé, and the reality star has not shied away from standing up for herself on social media. And that includes confirming that those Bachelorette rumors aren't grounded in truth.